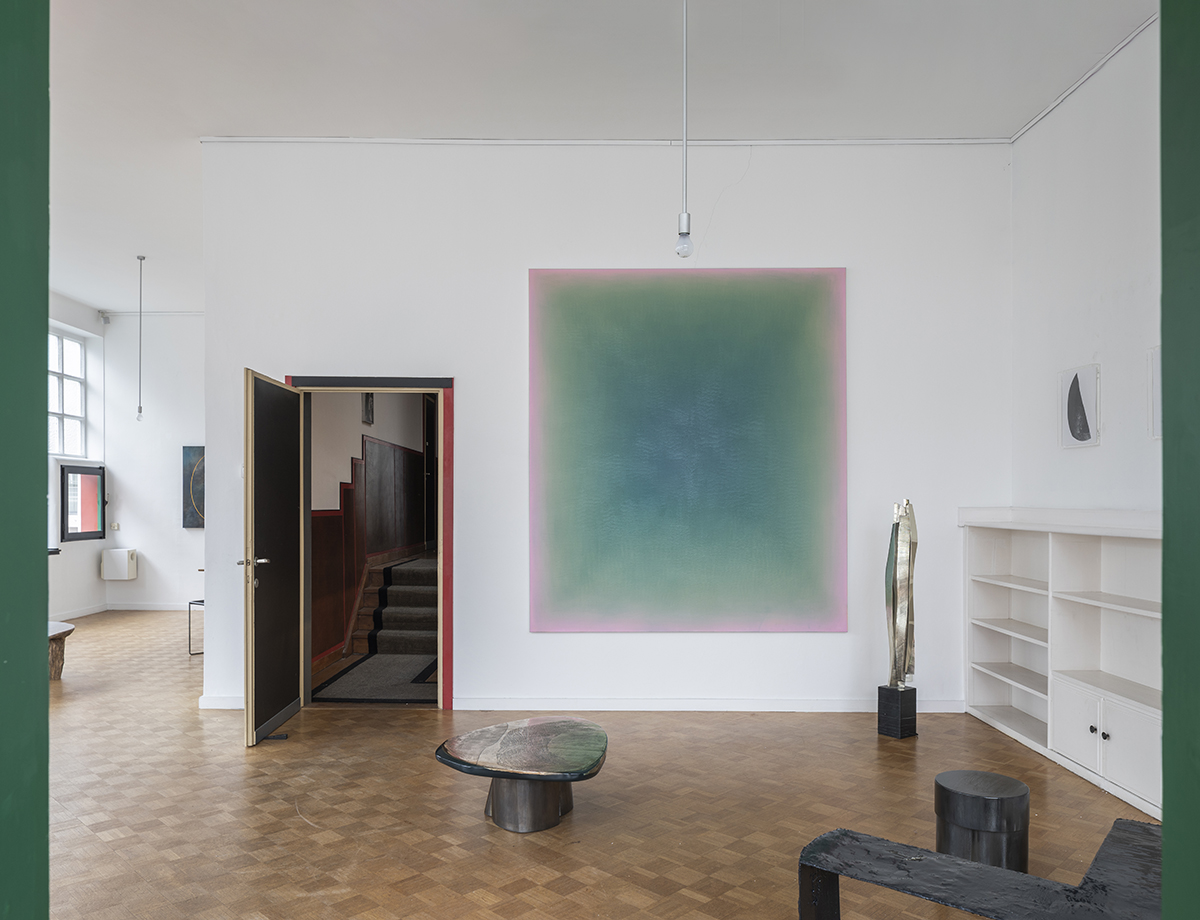 This summer, the galleries Barbé Urbain and Atelier Ecru, located in Ghent, Belgium, have teamed up to present a temporary exhibition of collectible design and contemporary art outside of their dedicated spaces. Named to evoke a sense of discovery, the Magellan show brings together works by a host of artists and designers in the De Beir residence, an iconic early Modernist building designed by Belgian architect Huib Hoste in 1924.
More 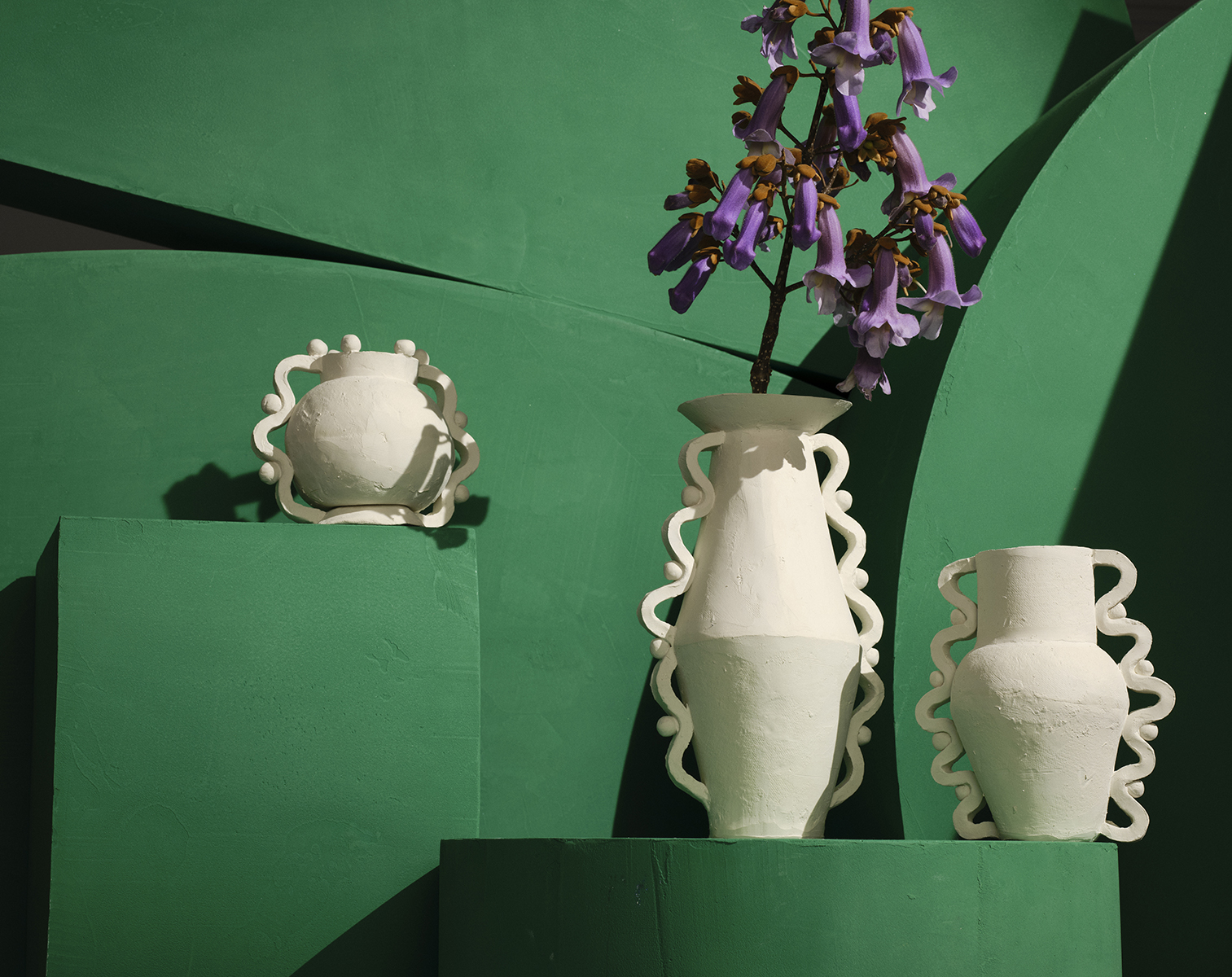 In a Public Art Installation at Rock Center, Emily Mullin’s Floral and Ceramic Hybrids Are Suddenly Larger Than Life

In still-life ceramic and floral vitrines framed by Art Deco flourishes in the lobby of 45 Rock, in photographic murals lining the underground concourse level, and at Top of the Rock, the viewing platform where visitors can look out over Manhattan, Emily Mullin's work is suddenly available to all. It's a huge leap in visibility for the Brooklyn-based artist, who produced the photographic works on view in collaboration with her partner, Tony, as well as a throwback to the earliest moments of her New York career, when she commuted to Midtown for a job designing window displays up the street at Bergdorf Goodman.
More 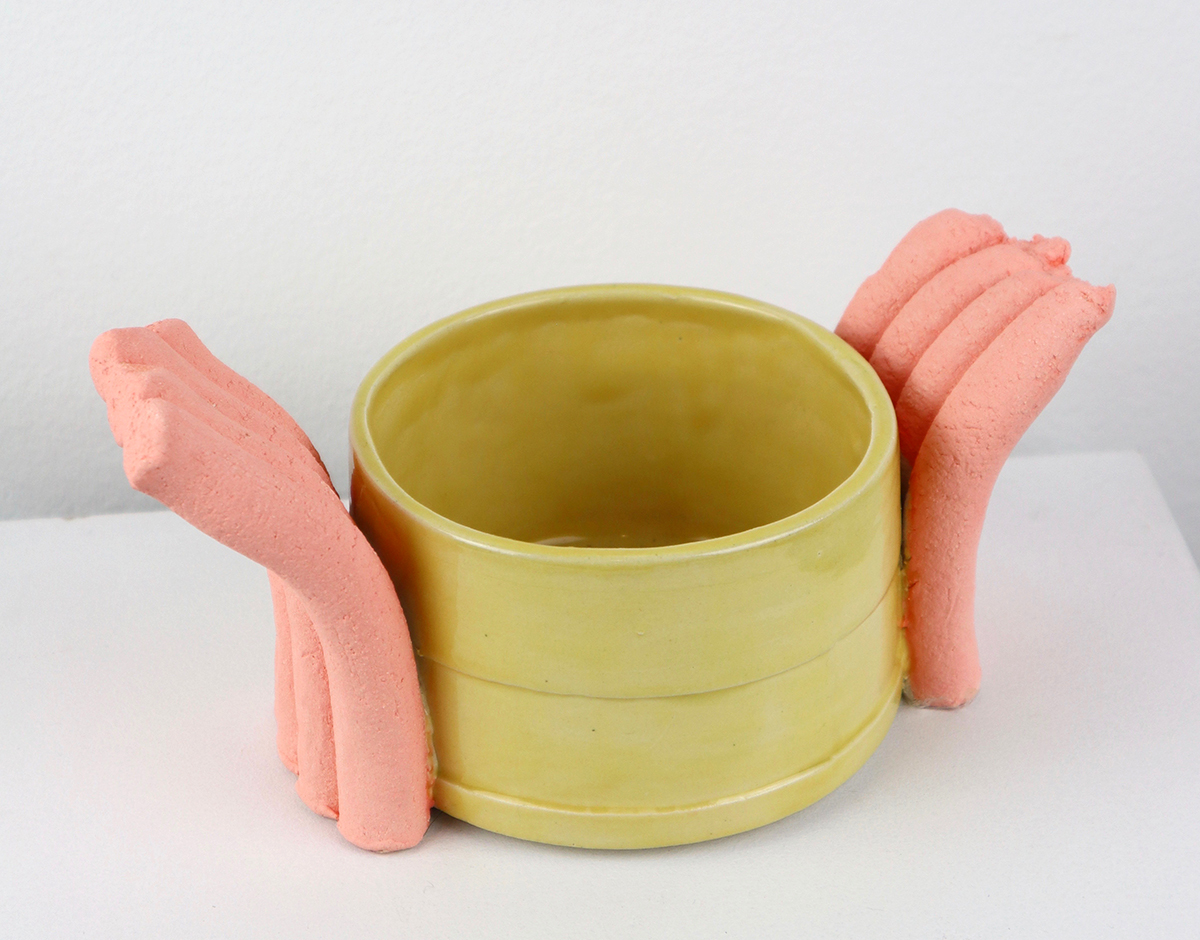 An amalgamation of materials and what she refers to as “drawer ideas,” Icelandic artist and designer Hanna Dís Whitehead’s latest exhibition, "Spin," turns experimental objects on their head while bringing lost thoughts from her school years back to life. Presented by the Gerðarsafn Art Museum in Kópavogur, Iceland, the exhibition showcases a selection of colorful and exuberant pieces, from a wonderfully offbeat lamp adorned with geometric, hand-cut tiles and pine, to ecstatic, slumping goblets.
More 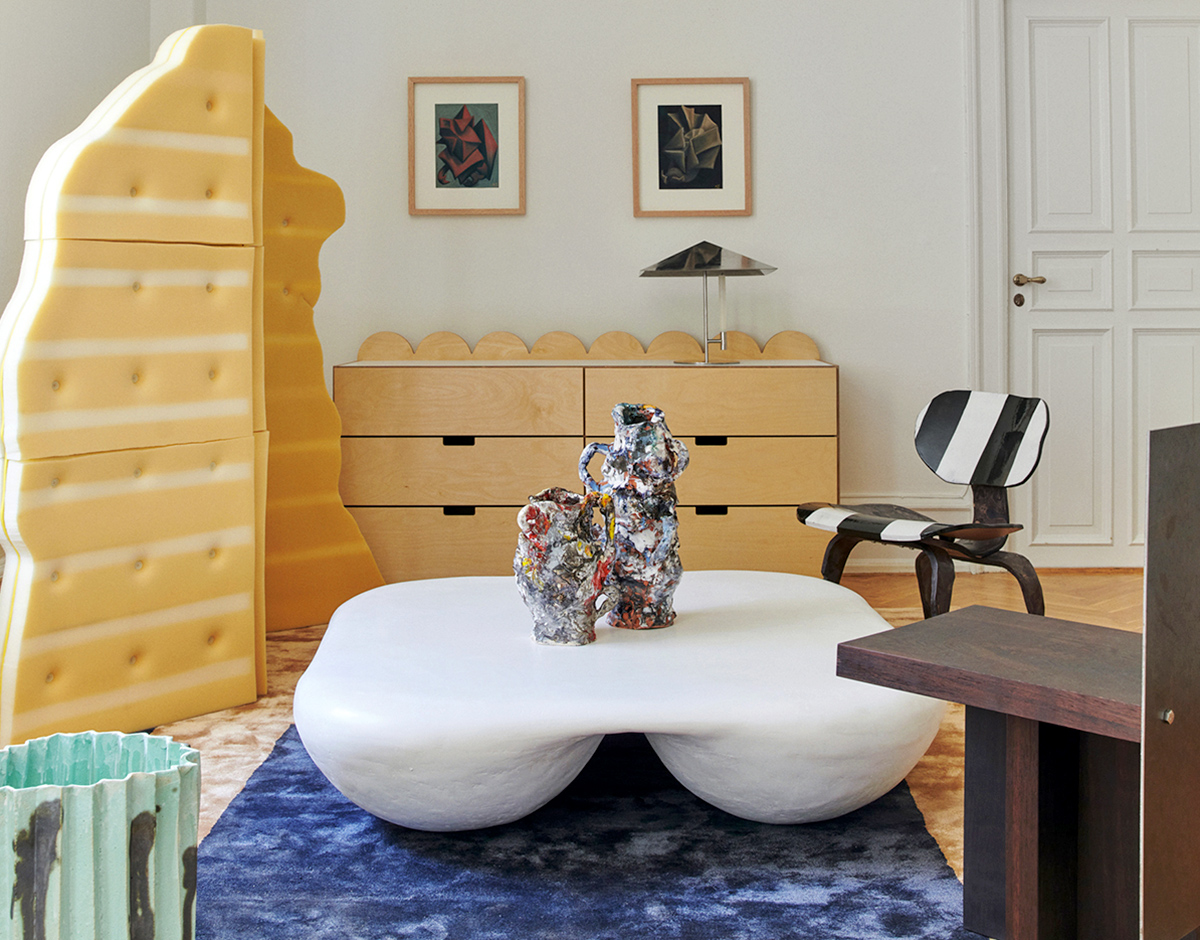 Copenhagen may be famed for Danish Modern furniture, but the contemporary designs on show at a new gallery in the city’s Østerbro neighborhood are decidedly more exciting (for us, anyway). The debut exhibition at Carlota Oyarzun gallery occupies two rooms of a private residence, which boasts historic details and enviable herringbone floors. In wonderful contrast to the period features, the group show, titled It Will Follow, brings together 14 local and international designers who explore “how bold materials are adapted to function with simplicity in form and subtle detailing.”
More 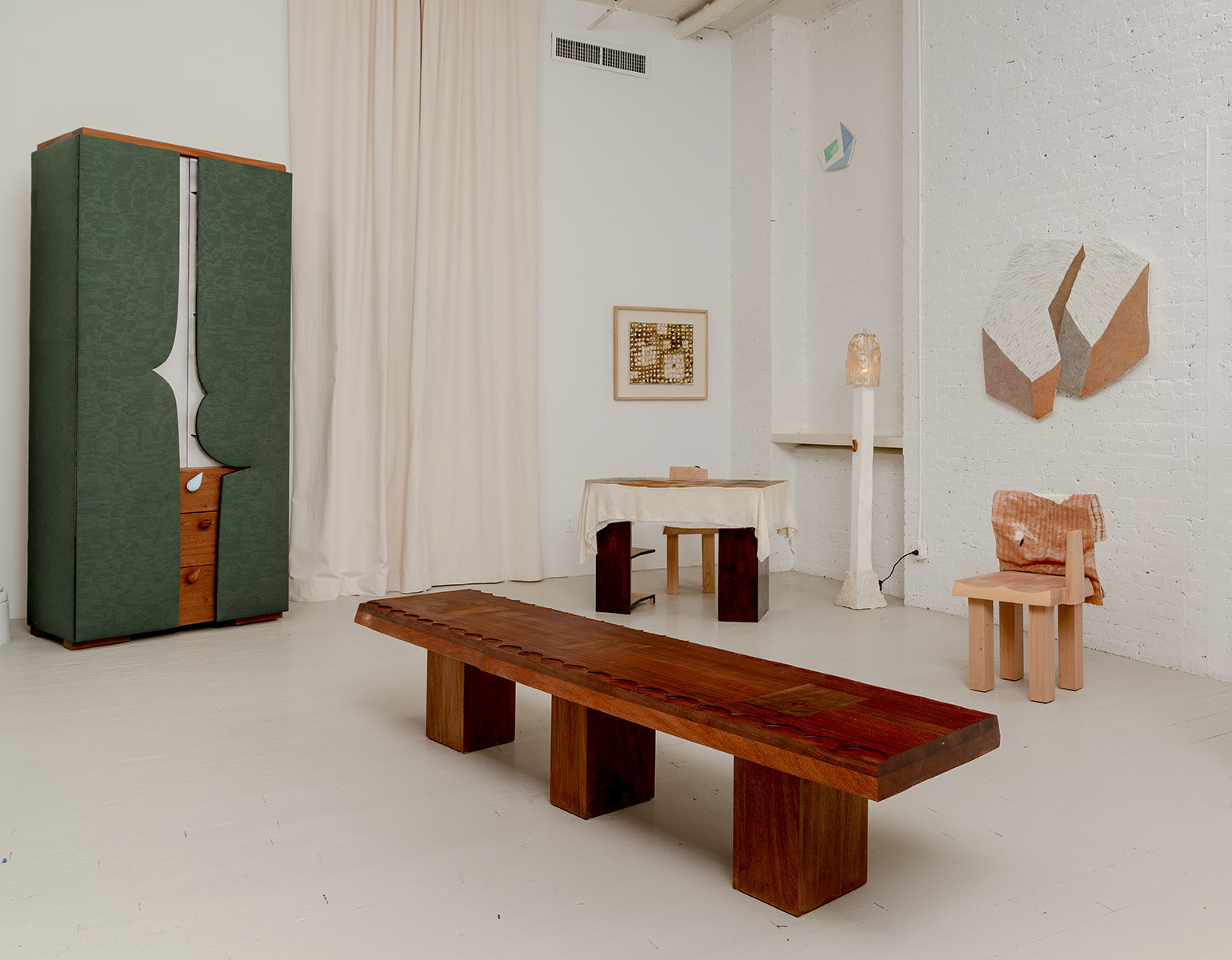 In a New Exhibition, a Designer in Conversation With His Artist Mother

The intimacy and complexity of family bonds are a boundless source of artistic inspiration, but New York–based designer Minjae Kim and his mother, the South Korean artist MyoungAe Lee, have taken it a step further with their a collaborative show now up at Matter Projects. When their respective work in placed conversation, the result is both intriguing and poignant.
More 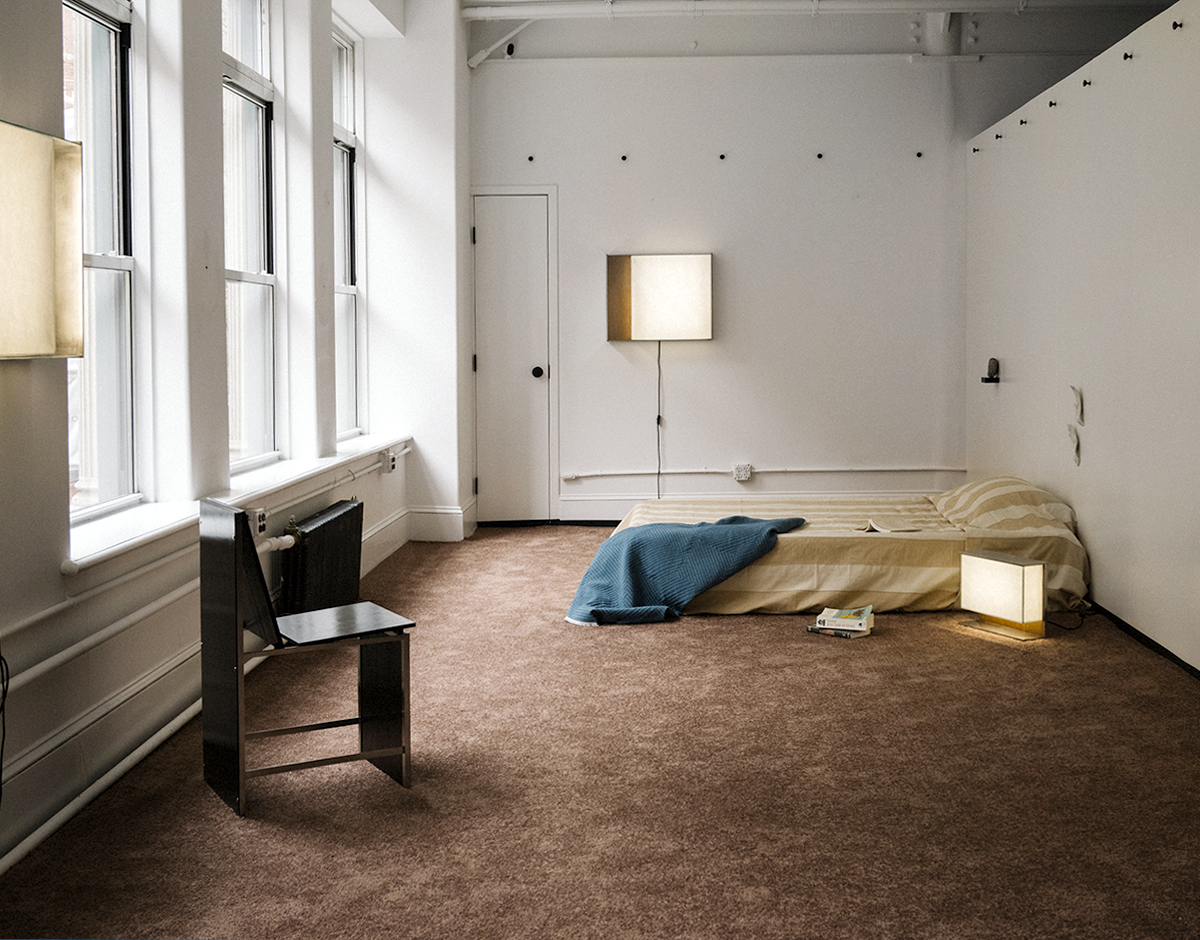 Haos's Sophie Gelinet and Cedric Gepner recently relocated from Paris to Lisbon, where they've opened a larger studio and workshop where they can make work on-site. But rather than take their practice to the furthest experimental reaches just because they can, they've instead created a pared-down, rigorous framework for their fourth collection, taking cues from traditional Japanese architecture, 20th-century Modernism, and the Dogme 95 movement, which sought to distill filmmaking to its essence by rejecting special effects and gimmicks.
More 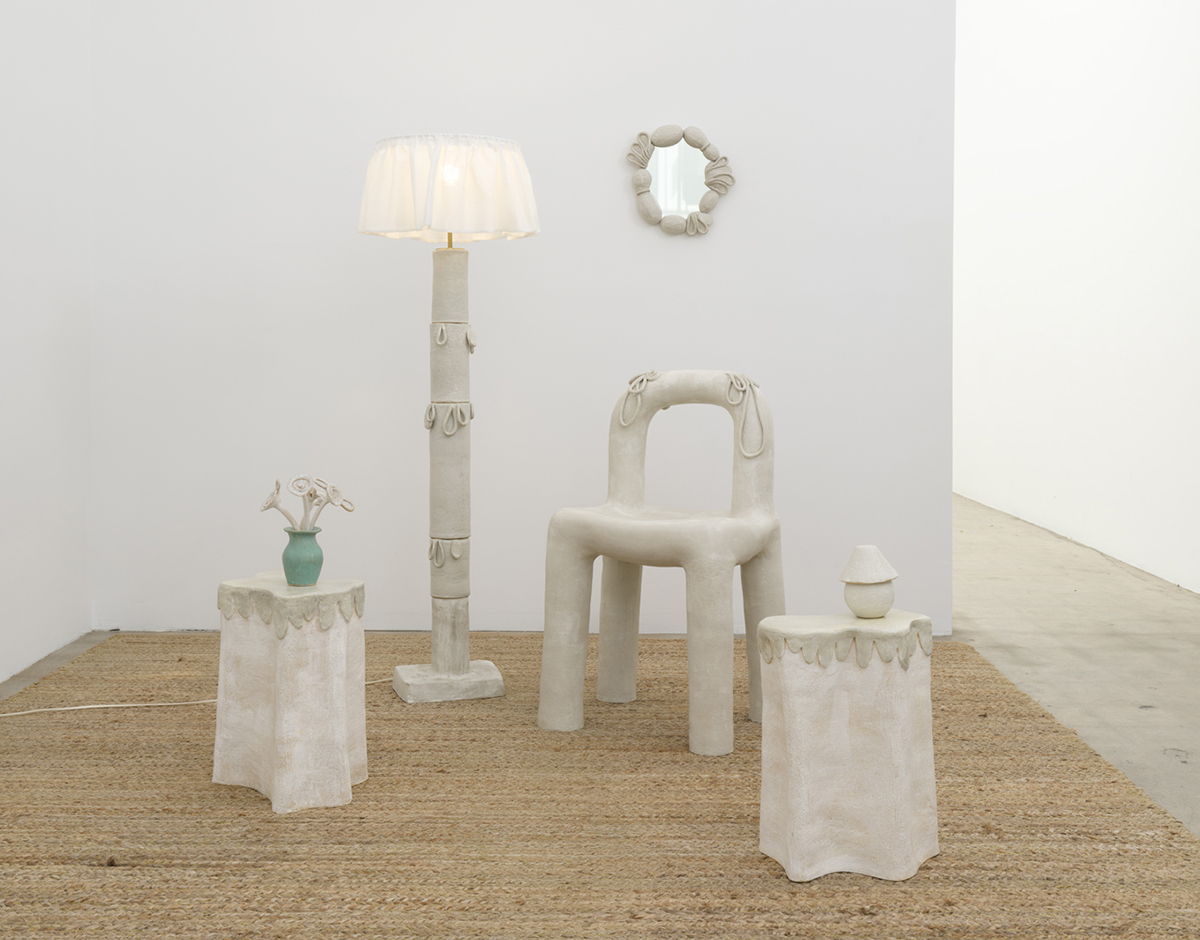 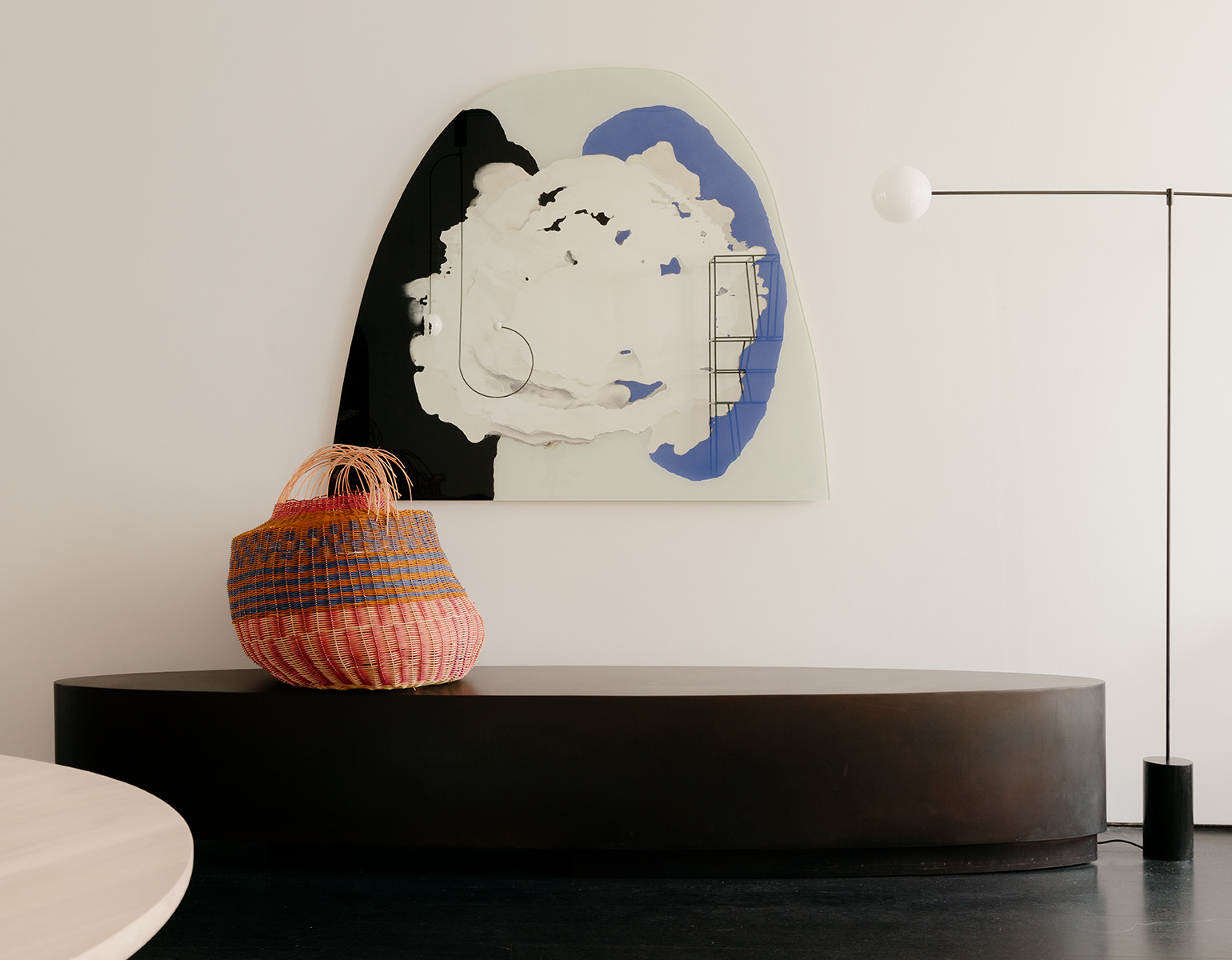 Studio Herron's Dee Clements felt hemmed in by her own perfectionist tendencies until a long talk with Future Perfect gallery director Laura Young — in advance of Clements's solo show, which is on view at New York's Casa Perfect through the spring — loosened her up. The resulting pieces play with a viewer's expectations of a "basket" in the most wonderful of ways.
More 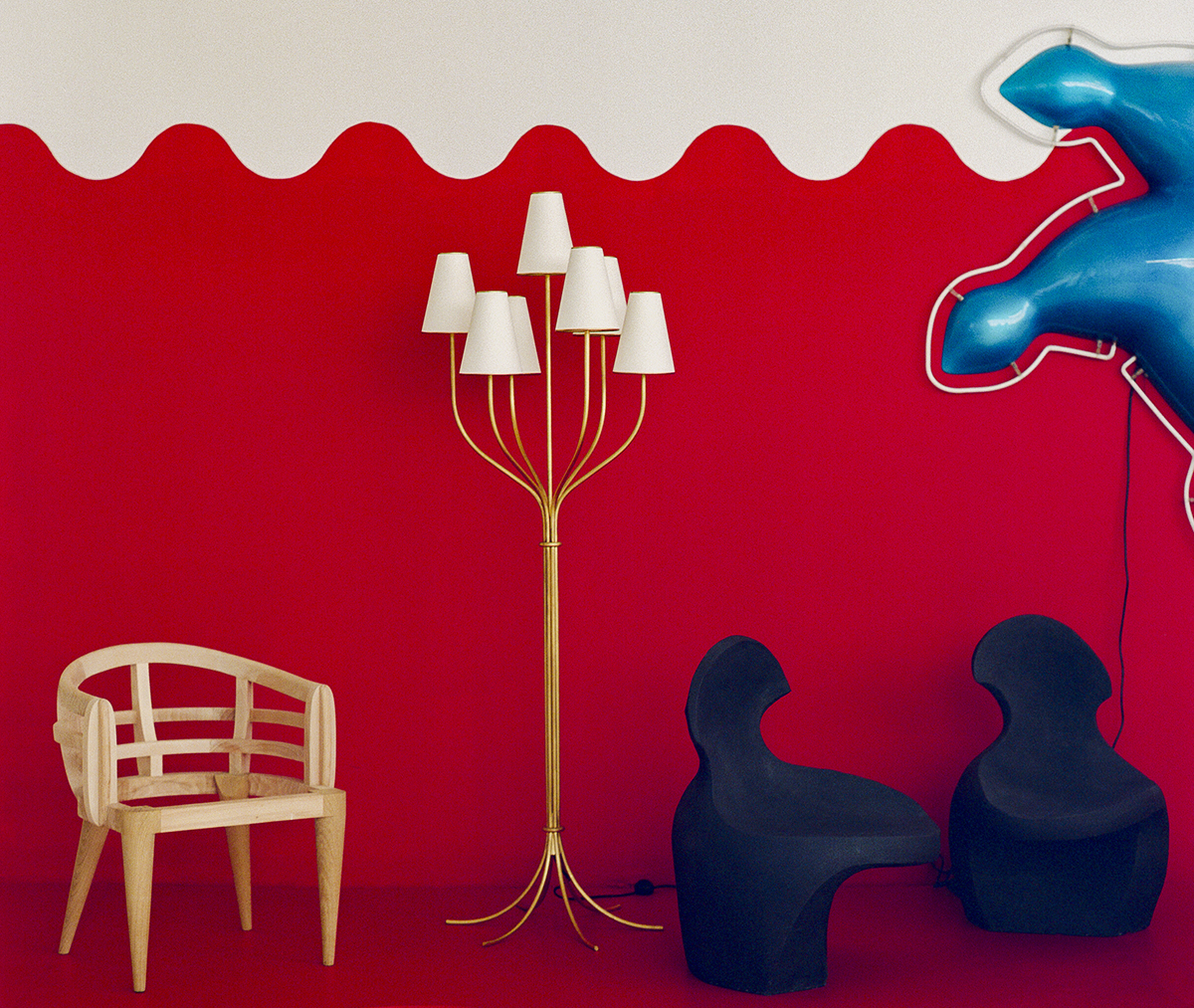 Who among us isn’t captivated by the depictions of daily life that grace the covers of The New Yorker every week? The ones by late illustrator Pierre Le Tan, however — who drew many a domestic scene for the magazine — were in fact the muse for a new NYC showroom for French upholsterers Atelier Jouffre. Designers Olivier and Clio Garcé — who recently moved from the city to Lisbon, where they set up their own studio, Garcé & Dimofski — transformed the industrial building in Long Island City into a space where artworks and design pieces are intended to “emerge from an illustrated dreamscape.”
More 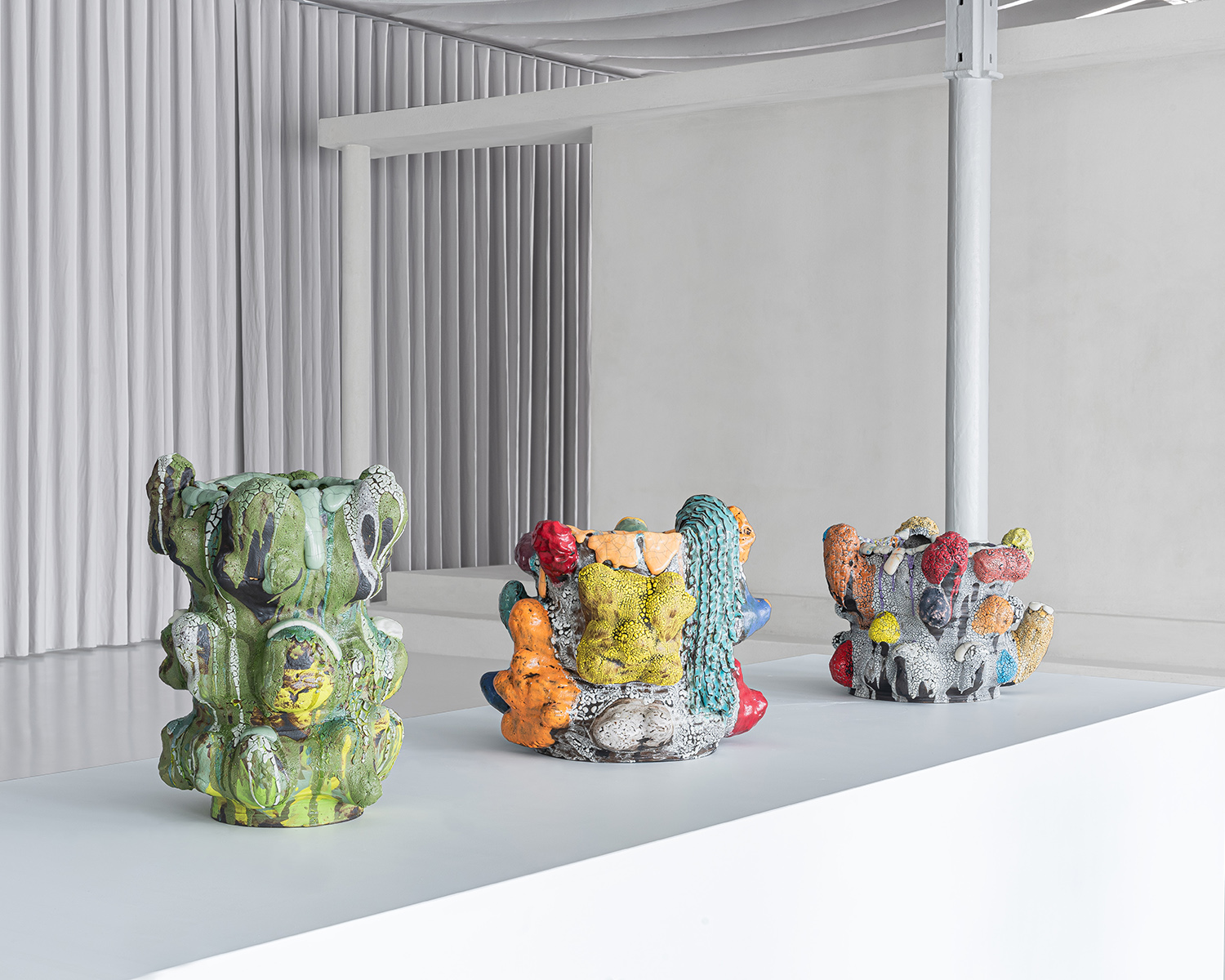 A New Show Highlights the Appealingly Messy Side of Contemporary Ceramics

Closing in Barcelona this week is an exhibition that celebrates some of the bigger trends in contemporary ceramics these days — namely bright, drippy glazes; lumpy, organic forms; and raw, tactile, fissured surfaces. Presented by Side Gallery, “Exposed Material” is an overview of work by four artists who span several generations and hail from places ranging from America to Auckland, New Zealand.
More 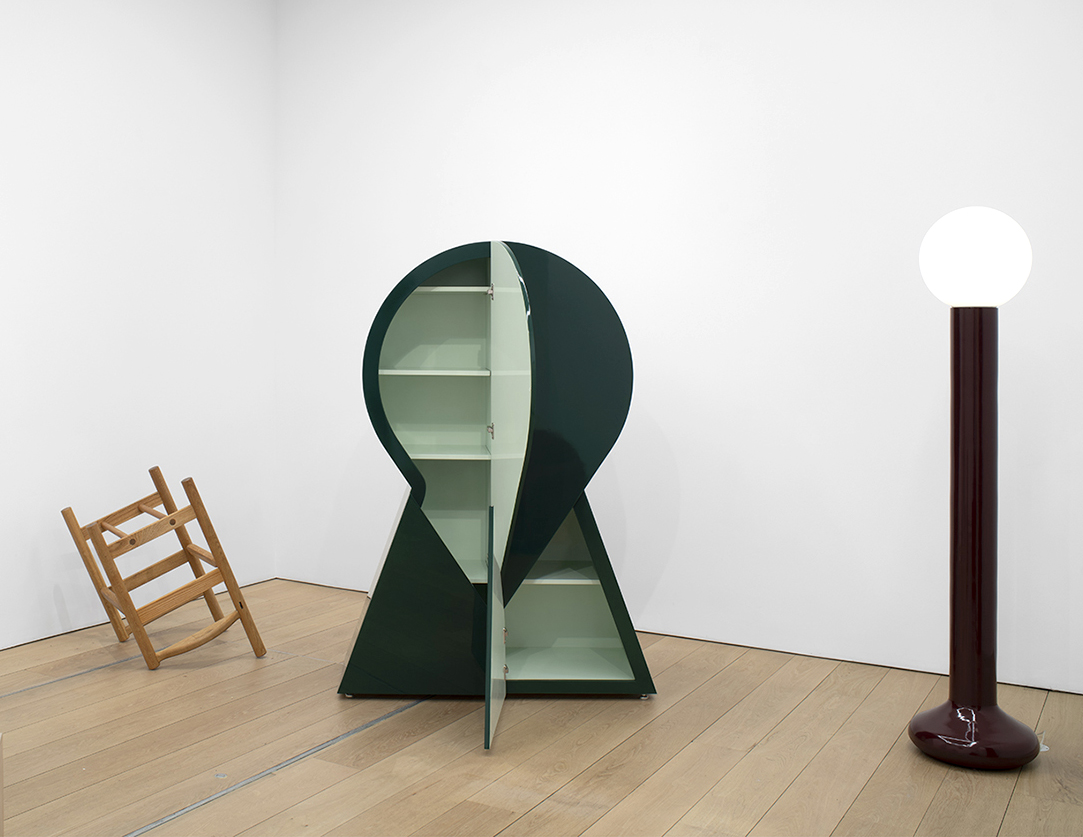 L.A. designer Ryan Preciado traffics heavily in nostalgia, particularly for his own Cali upbringing: "When I was a kid, my grandpa would give me five bucks to buff and polish his cars; I bet that’s why I’m attracted to the glossy finish," he told us back in 2019. He also cited his grandmother's garden chairs, and his uncle's car-show habit, as formative design influences. All of those influences were on display in his first gallery show, A Cliff to Climb, at Canada gallery in New York earlier this month — including via a new, ultra-polished green cabinet that he created at his friend’s autobody shop.
More 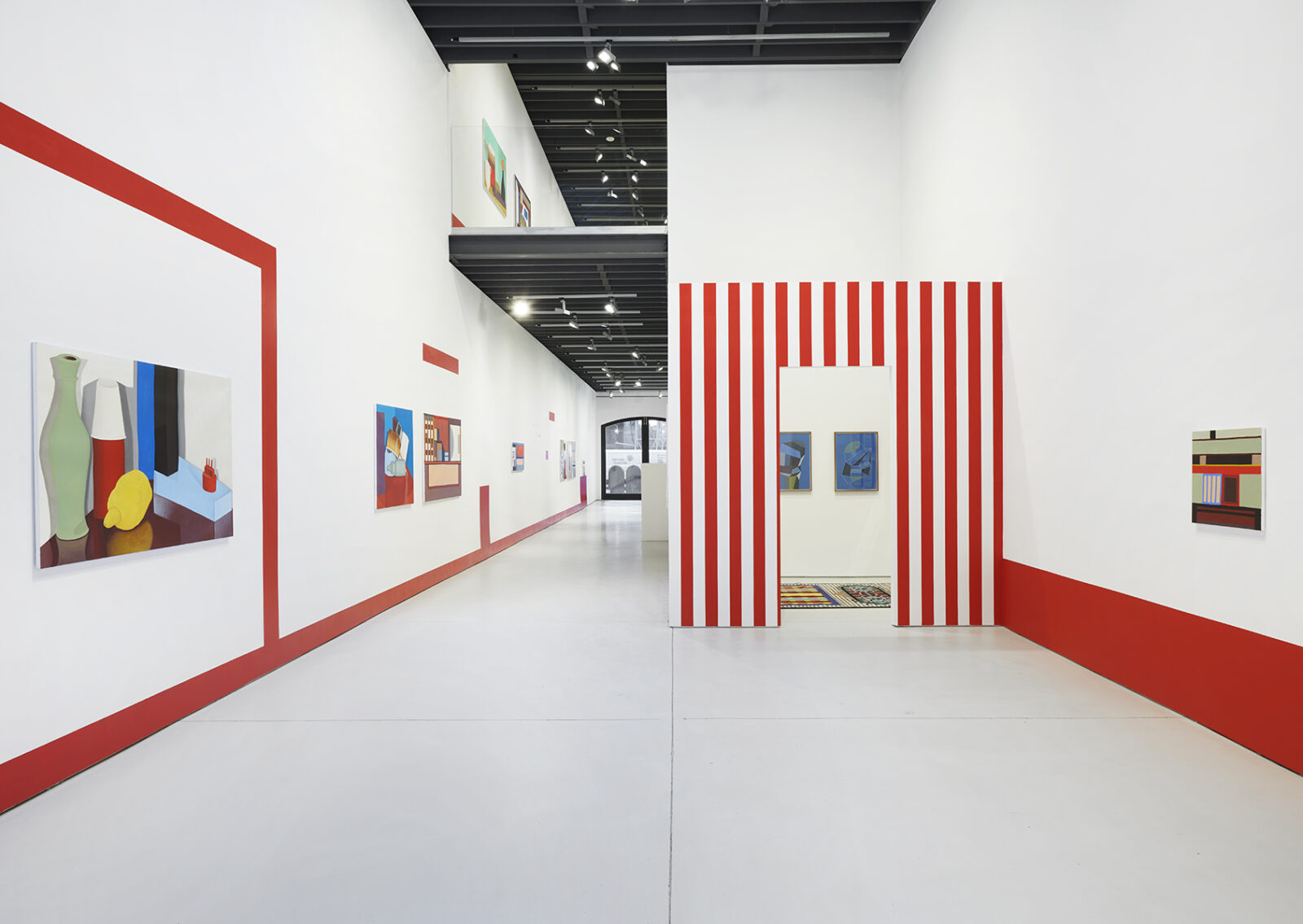