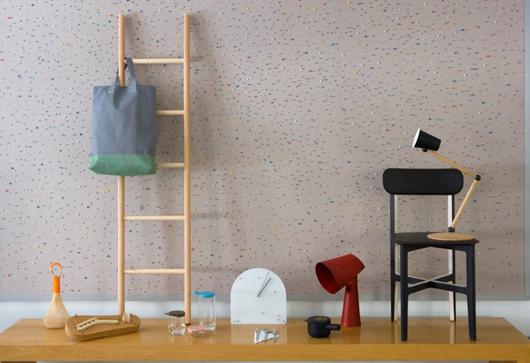 There’s a funny ritual that goes on at the start of each year in the Design Products program at London’s Royal College of Art. The masters program is split into five separate units, or “platforms,” and the professors helming each — which at last count included Sebastian Wrong, Doshi Levien, and curator Daniel Charny — are charged with convincing new students to turn away from the others to join their course. Mostly they rely on written manifestos describing the aims and ideals of their particular curriculum, like enacting social change or loosening the boundaries of the discipline, but there are also more nuanced incentives, like we will hire Jasper Morrison’s photographer to take extremely clever shots of your final projects, a move recently employed by Platform 14 leaders André Klauser and Ben Wilson. Granted, when they called in camerasmith Nicola Tree to shoot the images you see here — which are a Sight Unseen exclusive — it was meant more to teach their six graduating students that documenting work is a key part of the design process, especially in a course aimed at fostering entrepreneurship.

Tree photographed a select group of products chosen by Klauser and Wilson from Platform 14’s graduation show held at the RCA last month, working with the students themselves to stage the shots in either the campus’s printmaking classroom or its senior common room, a kind of fancified break room for the teaching staff. “I gave her a bit of the context behind each piece so that she could bring out what’s special about it in the picture,” explains Klauser. “There’s a uniqueness to every single one of these objects, something that sets it apart.” That’s because he and Wilson formed the directive of their year-old unit — a spinoff from one Klauser previously led with Sam Hecht and Durrell Bishop — around the idea that students should move beyond the usual design typologies to pursue unique functionalities. They’re asked to create products that are above all useful and relevant, and ideally marketable as well. “We’re not against people designing chairs and lights and all the rest, but we would ask them to have a strong motivation to do so,” says Klauser. “We’re encouraging people not to come back with the obvious, but the surprising.” Read his explanation of the ideas behind each product in the captions below. 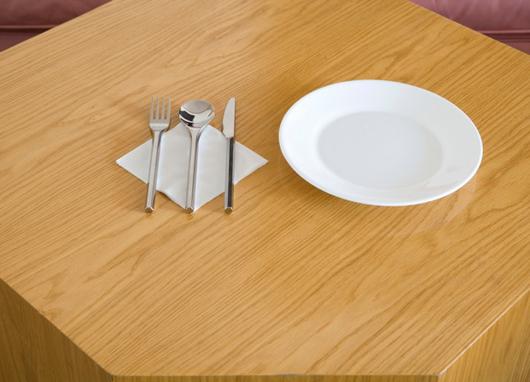 Molly Anderson, Some New Things cutlery
“Molly started with a collection of items that she found in pawn shops and was drawn to: 30 to 50 objects, all quite anonymous, where you couldn’t really put a name to the design (click here to see a lovely picture of them). She then analyzed the collection and sorted it into different groups, some looking at processes, some looking at materials, and sometimes just a common color that held it together. Her whole project was an exercise into a specific working method. It’s quite common in design to use existing objects as references, but she did it quite consciously. The cutlery was inspired by an Allen wrench and a pencil and uses those familiar hexagonal profiles to suggest grip; if we see the cutlery in section then we would expect this is an object we’re supposed to pick up and handle. It’s partly aesthetic, partly to communicate the function, and partly to impart that function. In the group shot above, Molly also made the tote bag based on a work glove with a rubberized grip, from that same initial collection of objects. She gave a protected rubberized surface to the underside of the bag, and instead of stitching glued all the fabric together using latex. It’s quite a strong construction.” 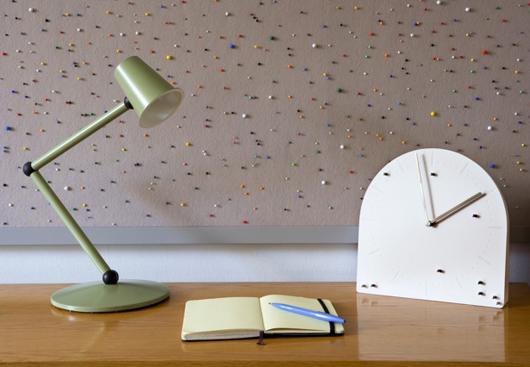 Jack Smith, Alarm Clock and Desk Light
“Jack’s clock uses little magnetic balls as indicators to trigger an alarm — it goes off whenever one of the clock’s metal hands touches an indicator and closes a circuit. The minute hand is longer, so if you place one of the magnets outside the reach of the hour hand, you’re automatically setting it as a minute timer. But if you set the magnet so the hour hand sets it off,  it’s more like an alarm clock or a meeting reminder. It could be useful in an office, but in a kitchen just as well. You store the magnets in the bottom corners when you’re not using them. For his desk light, Jack engineered a set of ball joints which are fully articulated and inspired by the life-drawing mannequins that illustrators use. There are no wires inside the light; the currents are running through the springs inside and the metal parts of the joints. That means you can have infinite movement — whereas a wire would get wound up and stop you from moving the lamp’s arms beyond a certain point, you can twist this one around as much as you want. Jack has also tried to make his design friendly, so even though it’s quite functional, it hasn’t got this techy task light feel to it.” 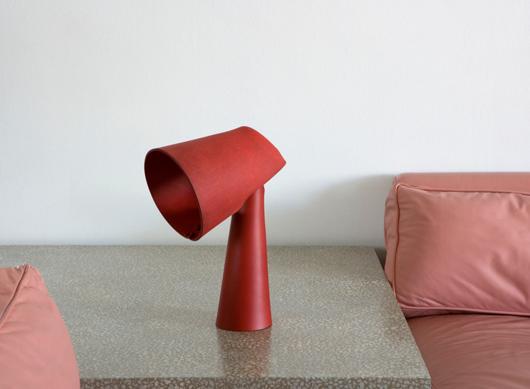 Shota Aoyagi, Boneless light
“Shota’s red lamp is made from one piece of leather that’s effectively a flat skin which he rolls up and folds into this fixture. It’s practical in the sense that it could be sold flat-pack, it’s using a renewable material, and the tooling is very minimal — you just need a stencil that cuts the leather into the proper shape. But the aesthetics are a strong part of the project as well.” 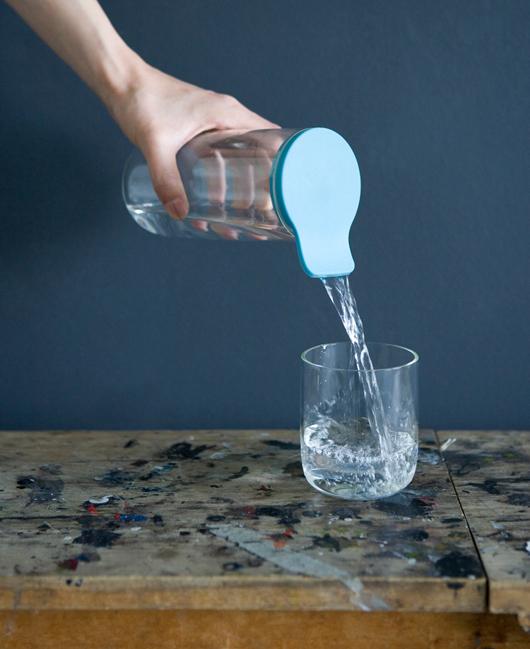 Shota Aoyagi, Roofers vessels
“Shota’s jugs are really quite magical — well, magical is a cheesy word, but they are fascinating. Each water vessel is just a glass beaker with the spout purely in the lid. The spout is like a beak, and as you pour, the water sticks to the underside of the beak and runs along it. There are a series of ribs underneath that give the water a nicer flow and prevent drips when you’re done pouring. The idea is something he found purely by experimenting. The collection also includes carafes of other sizes, a thermos, and a teapot as well.” 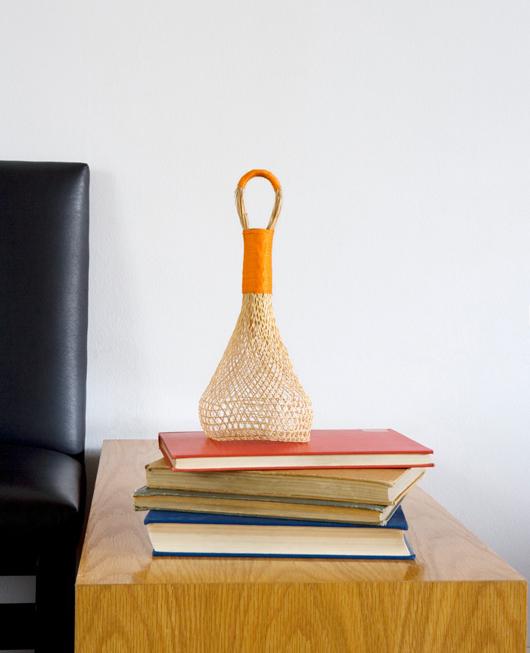 Mijin Park, Woven Torch
“Mijin was interested in traditional Korean weaving techniques, and she looked at applying them to various materials like plastic strips, for example. This object, to me, was the most interesting, where she’s used a traditional rattan but made it into an electronic product, which is slightly more unusual. The idea was to create something that Korean craftspeople could actually manufacture — they’d have to buy the electronic part, but it’s one unit that can be inserted into the woven body of the light. The orange part is a bit of string she’s finished the piece off with, to make a handle and reinforce the way you can hang it. The on/off button is at the top of the handle.” 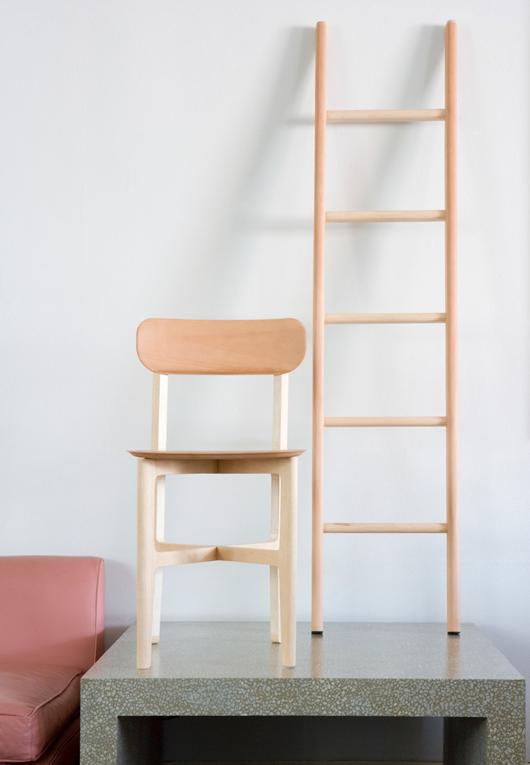 Ki Hyun Kim, 1.3 Chair and 1.3 Ladder
“In the first year of our program, we give a bit of homework over the Christmas break. Last year we asked the students to do a bit of research into beauty, completely removed from function. It’s basic but actually quite a hard question, what do you think is beautiful. Ki looked into materials as an answer, focusing on different types of wood with different qualities, and he developed an obsession with balsa wood. It’s light but it’s soft, so you can make an impression in it with your thumbnail. His challenge was to find a way to use its qualities but also find a way to deal with its weaknesses. He developed a process where he laminates a veneer over a balsa wood core, which protects its surface and gives it strength, and ended up designing both a ladder and a chair that’s the lightest in the world, at only 1.3 kilograms. A chair gives you the opportunity to compare yourself to the history of chairs — in this case going up against Gio Ponti’s Superleggera and making one that’s even lighter — but for me it’s not really about the chair itself. It’s more about the process behind it, which could be applied to other, even more-relevant subjects.” 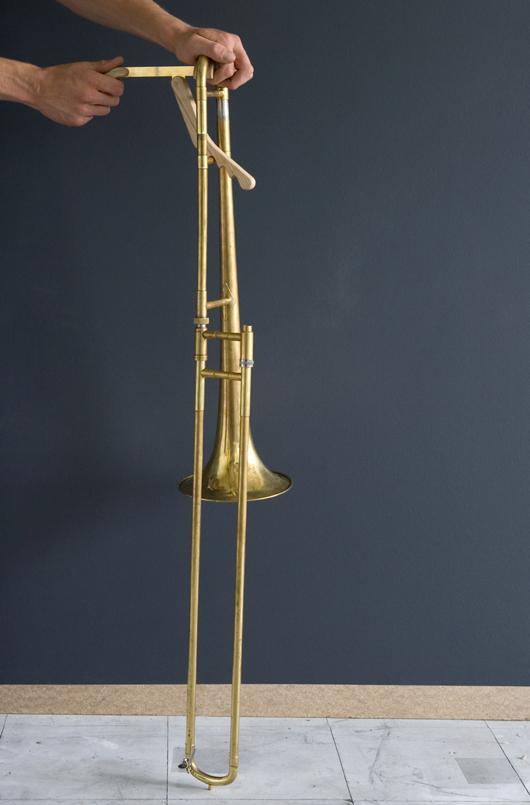 Tom Jarvis, Trombone Slider Puller
“All brass instruments have tuning slides, which you pull out or push in to tune the instrument. A very common problem is when the slides seize up because of all the saliva that gets inside when you play them. It happens incredibly quickly; if you don’t play for two days, that’s all it takes. At the moment, musicians have to send their instruments to professional maintenance people when this happens, and the maintenance people don’t even have sophisticated tools themselves — they put the instrument in a vise and basically bang the slide out. Tom’s levers don’t require particular strength to fix the slide; it’s not as much about strength as it is about control. It’s quite uncomfortable forcing a tuning slide because of how delicate these instruments are, so if you figure out the strongest parts of the instrument to lever off of, you can achieve a very controlled action rather than having to bang it with a hammer. The materials Tom used are also designed to make people feel comfortable using his tools: they’re similar to the instruments themselves, and only touch their surfaces with wood or leather. In addition to individual musicians they could be interesting for the maintenance people, or it could be that every orchestra keeps a set of these.” 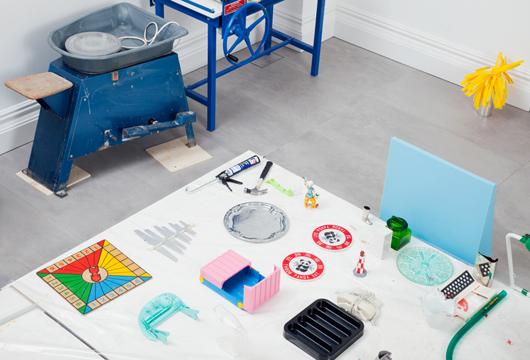 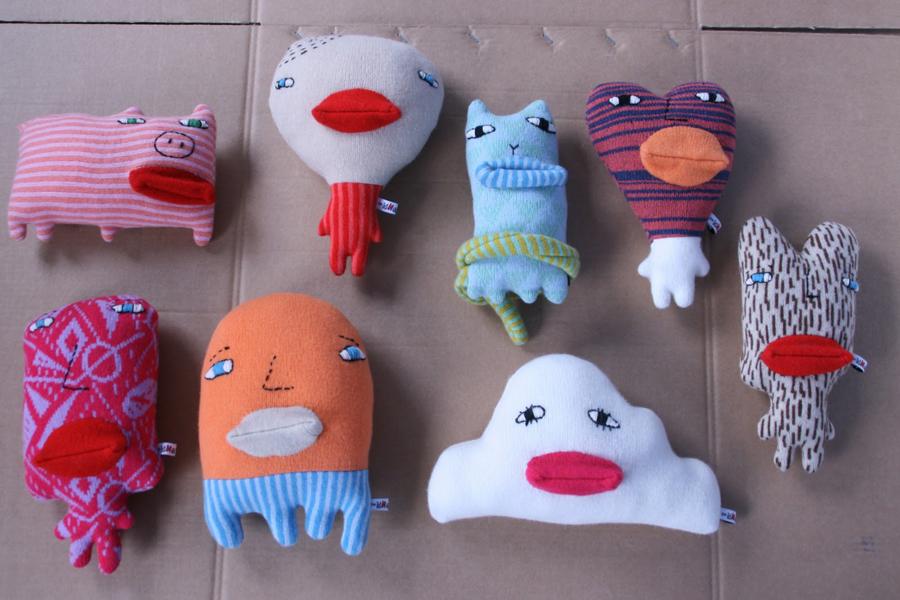