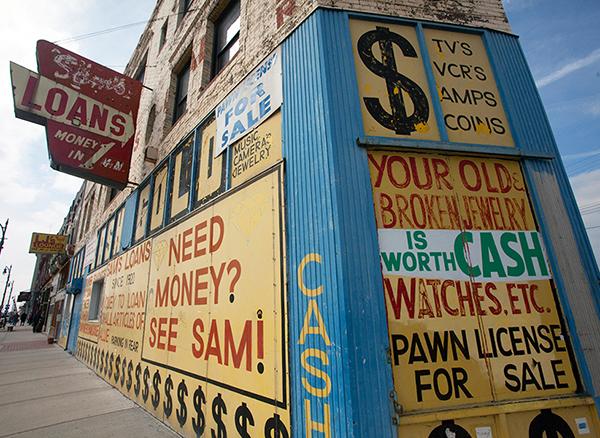 It wasn’t too long ago that bringing up Detroit made people feel sad. For decades it was America’s most downtrodden city; the first and only time I visited, 15 years ago, at age 19, I gasped dramatically upon arrival that it looked like its downtown had literally been bombed out and abandoned. But two or three years ago, Detroit got a brand new narrative, unfortunately by way of an annoyingly over-baked media frenzy that branded it the next hipster haven, complete with coffee shops, urban farms, and its first Whole Foods. The arrival of Shinola — which opened a watch factory and bicycle workshop there last year — quickly became a part of that narrative, even moreso when it opened its second retail location in New York a few months ago and began introducing the East Coast to its $2,000 artisanal bicycles and handmade leather goods. And yet the company is playing an important part in what’s really going on in Detroit, beyond all the coffee shops and organic foods, which is that it’s in the process of replacing parts of its failed industrial economy with a creative one, and that its residents and legislators are counting on that renewal to get the city back on its feet.

Shinola chose Detroit, says creative director Daniel Caudill, because it was committed to the idea of manufacturing in the U.S., and “when we were thinking about, where are there skilled laborers, and where are there people already doing things with small components, it very quickly became about Detroit for us,” he says. “It was a natural fit, it wanted to help us, and there was so much already happening there.” We figured Caudill — who moved to Detroit with Shinola in 2011 after spending more than 20 years doing product development, styling, and brand consulting out of Los Angeles — would be the perfect person to show us a small, personal snapshot of his new hometown as it is today, including some of both its original charms and its newer ones. He took these photos for us around Detroit and told us a bit more about what it’s been like to live there for the past two and a half years. 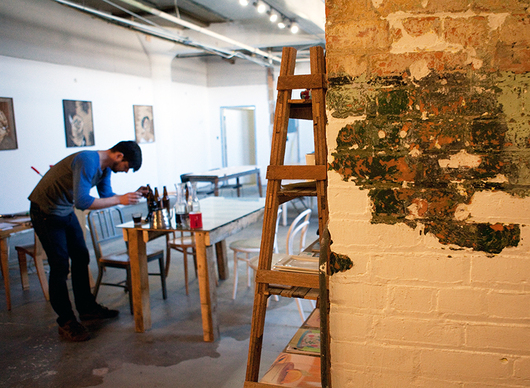 “Anthology Coffee inside Ponyride (a creative complex founded by Phil Cooley that houses shops and small business) has great coffee and pastries. Ponyride has a group of really talented people working in this building. It’s an inspiring place to hang out. This is what’s so exciting about Detroit today.” 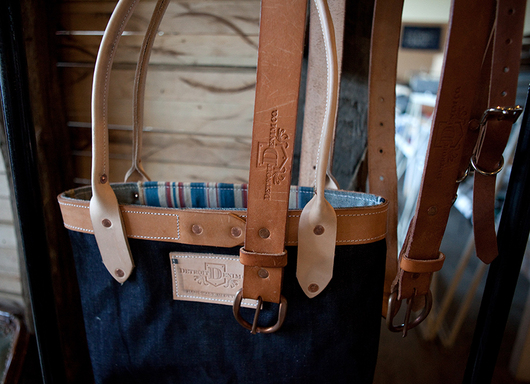 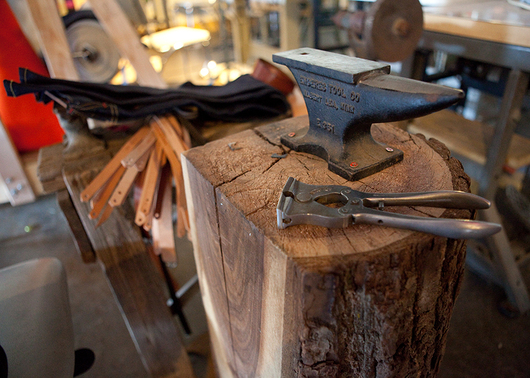 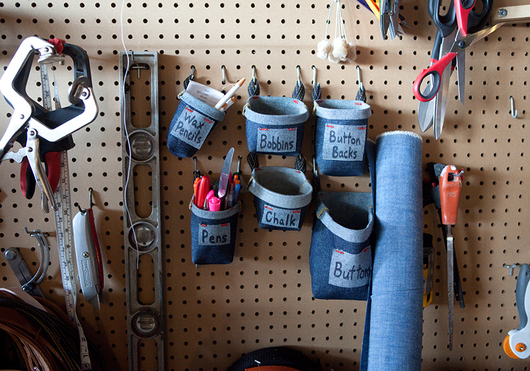 “Detroit Denim is one of the many small businesses that reside within Ponyride. It’s a small team, but they do incredible work.” 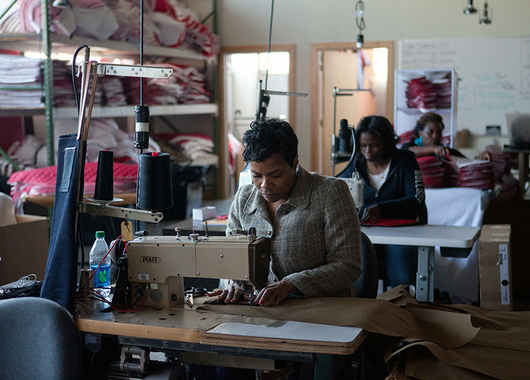 “The empowerment Plan, founded by Veronika Scott, is an amazing non-profit organization that hires homeless women from local area shelters to sew an innovative jacket that doubles as a sleeping bag. The jacket/sleeping bag gets passed out to the homeless, locally and around the country. Through donations, it has grown to service more and more cities.” 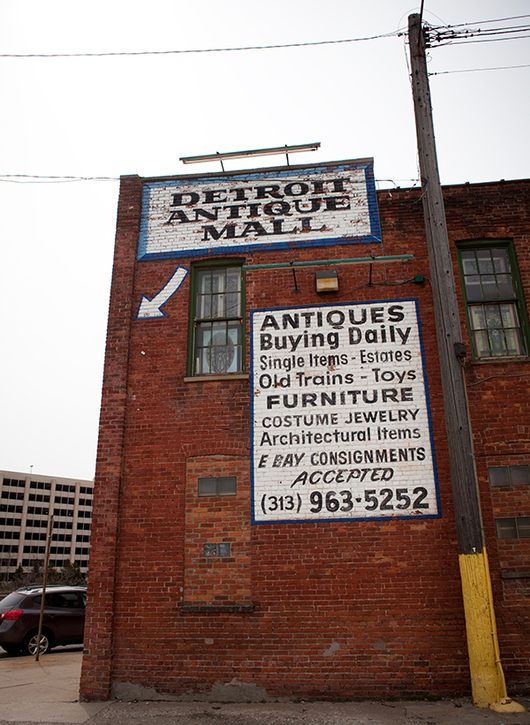 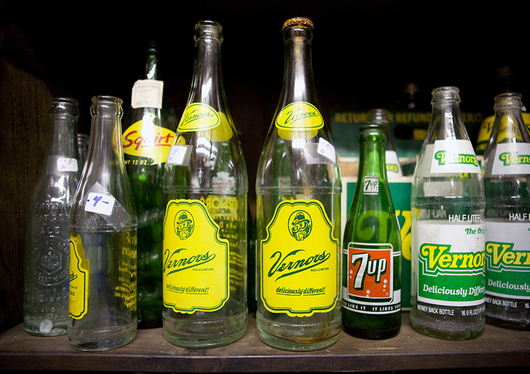 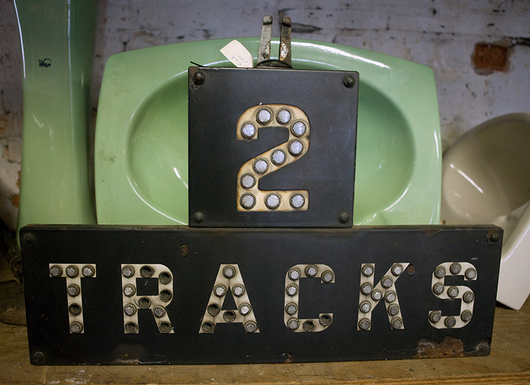 “For vintage shopping, the Detroit Antique Mall has become my go-to place. Every time I’m there I find something new. Also the Royal Oak antique market has become part of my Sunday ritual. We use a lot of vintage pieces for our stores and offices, so I’m constantly shopping for great vintage furniture and accessories.” 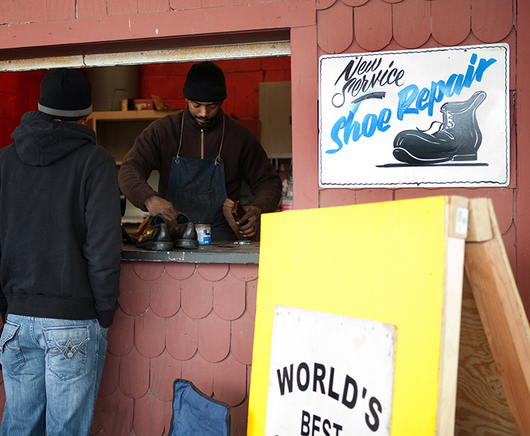 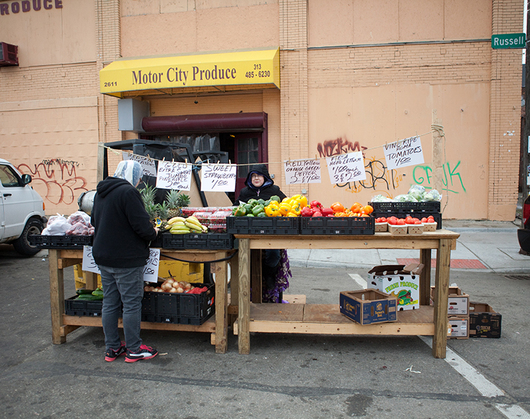 “I do my weekly shopping every Saturday at Eastern Market. It’s one of the best farmers markets I’ve ever been to. It has a huge variety of locally-grown produce, baked goods, and local food vendors. It’s a one-stop shop and where I spend my usual Saturday morning. There are about 150 stalls, and approximately 30,000 people go through every Saturday. Eastern Market is also surrounded by antique stores and other small business that can easily end up taking your entire day.” 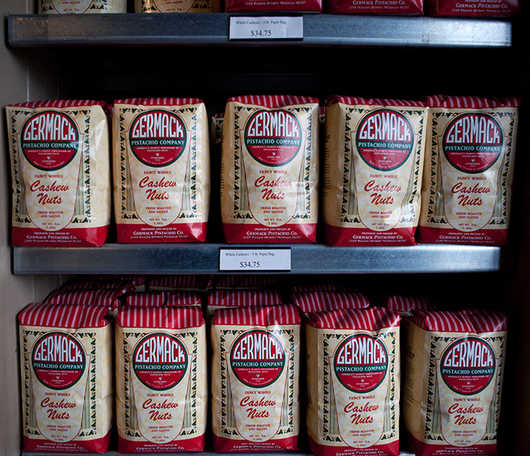 “The Germack Pistachio Company is a specialty shop at the Eastern Market. They roast a huge variety of nuts, seeds, spices, and coffee. They’ve been in business since 1912, so obviously they know what they’re doing. Their coffee is roasted in-house and it’s delicious.” 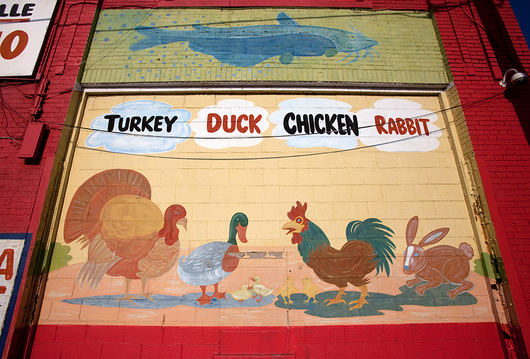 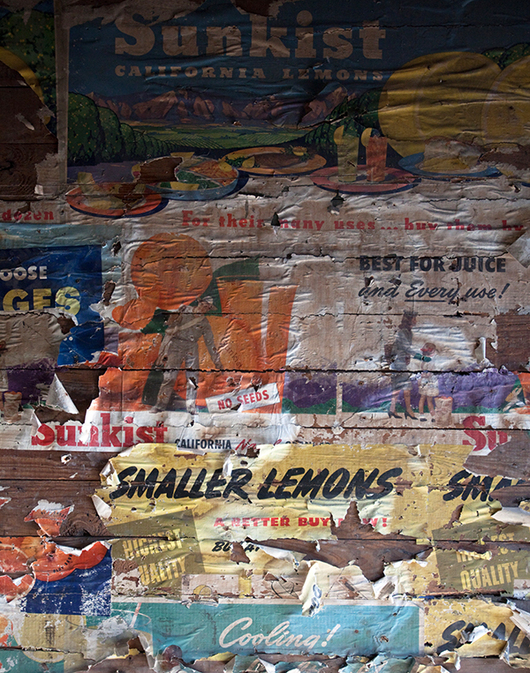 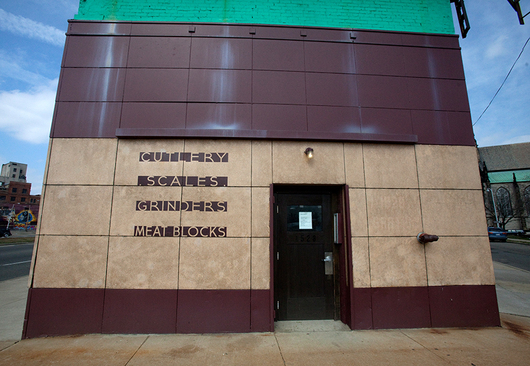 “Detroit is filled with great architecture and amazing street art. There are some really impressive murals and signage left over from some of the businesses that used to occupy these buildings. It’s been inspiring for me to discover some of the beauty this city has to offer. The past and present sit side by side here and create a unique experience.” 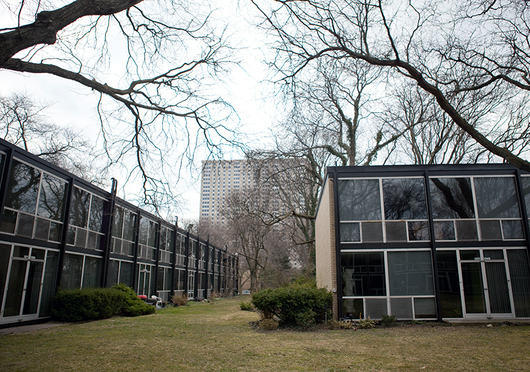 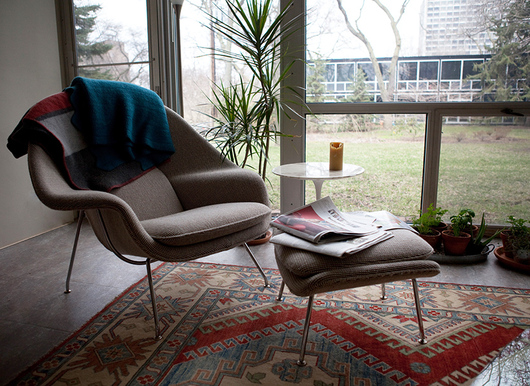 “I love spending time in the Mies Van der Rohe-designed community in the Lafayette Park neighborhood. From the buildings to the landscaping, every last detail of the community is perfectly simple and modern. It’s one of the most peaceful places, despite being right in downtown Detroit.” 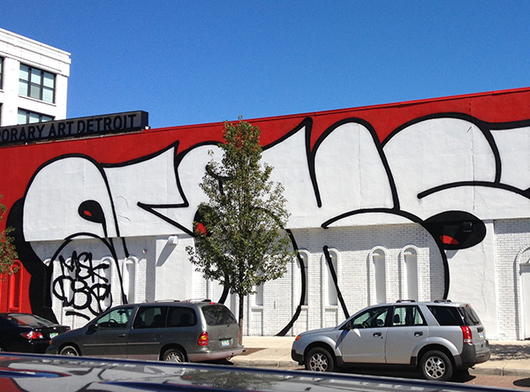 “One off my favorite things about Detroit are all the creative ways people use the city. The Museum of Contemporary Art Detroit (pictured) has a regular benefit dinner that’s housed in different places each time. You show up at the museum and get a map to dinner. If you’re lucky enough to get a ticket, it’s always an amazing event. One of my favorites was in the parking lot of an abandoned factory: dinner by candlelight with one of Detroit’s beautiful old buildings as a backdrop.” 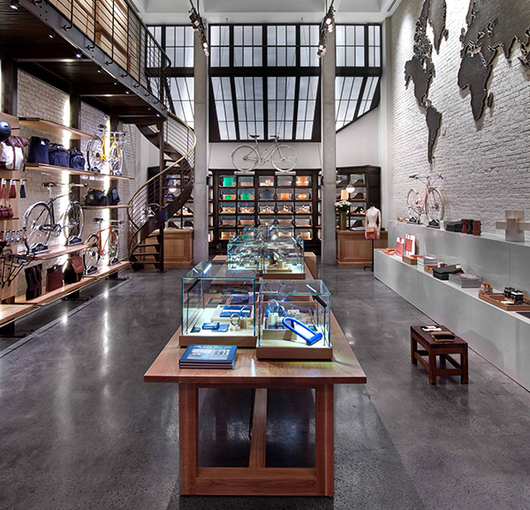 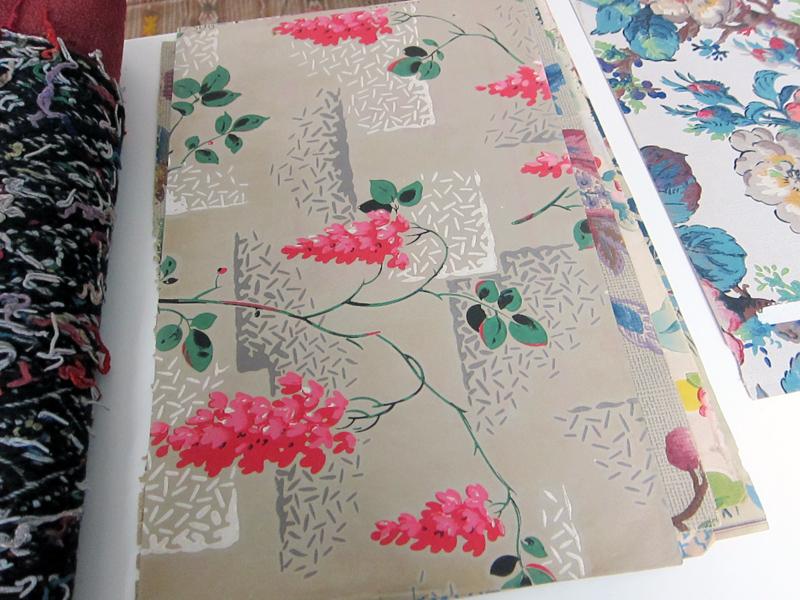 If you’ve ever spent an afternoon gazing out the window, futilely hoping that design inspiration might strike, you’ve probably wished you knew someone like Joanna Williams. As the proprietor of Kneeland Co., a Los Angeles–based, appointment-only studio that sources vintage prints, textiles, garments, and jewelry for the fashion and interiors industries, it’s Williams’s job to scour the globe, bringing back creative inspiration for sale. In Williams’s world, a book of early 20th-century decorative medallions, snagged from Pasadena’s legendary Rose Bowl Flea Market, might serve as inspiration for a new tile pattern, and the striped detail from a Moroccan wedding blanket might one day mutate into a maxidress for Anthropologie. As glamorous a life as that might sound, Williams concedes that it’s still a lot of hard work: “You’re definitely always searching and looking, trying to meet the right people, and making sure you don’t get ripped off,” she told me when I visited her new Atwater Village studio earlier this month.
More