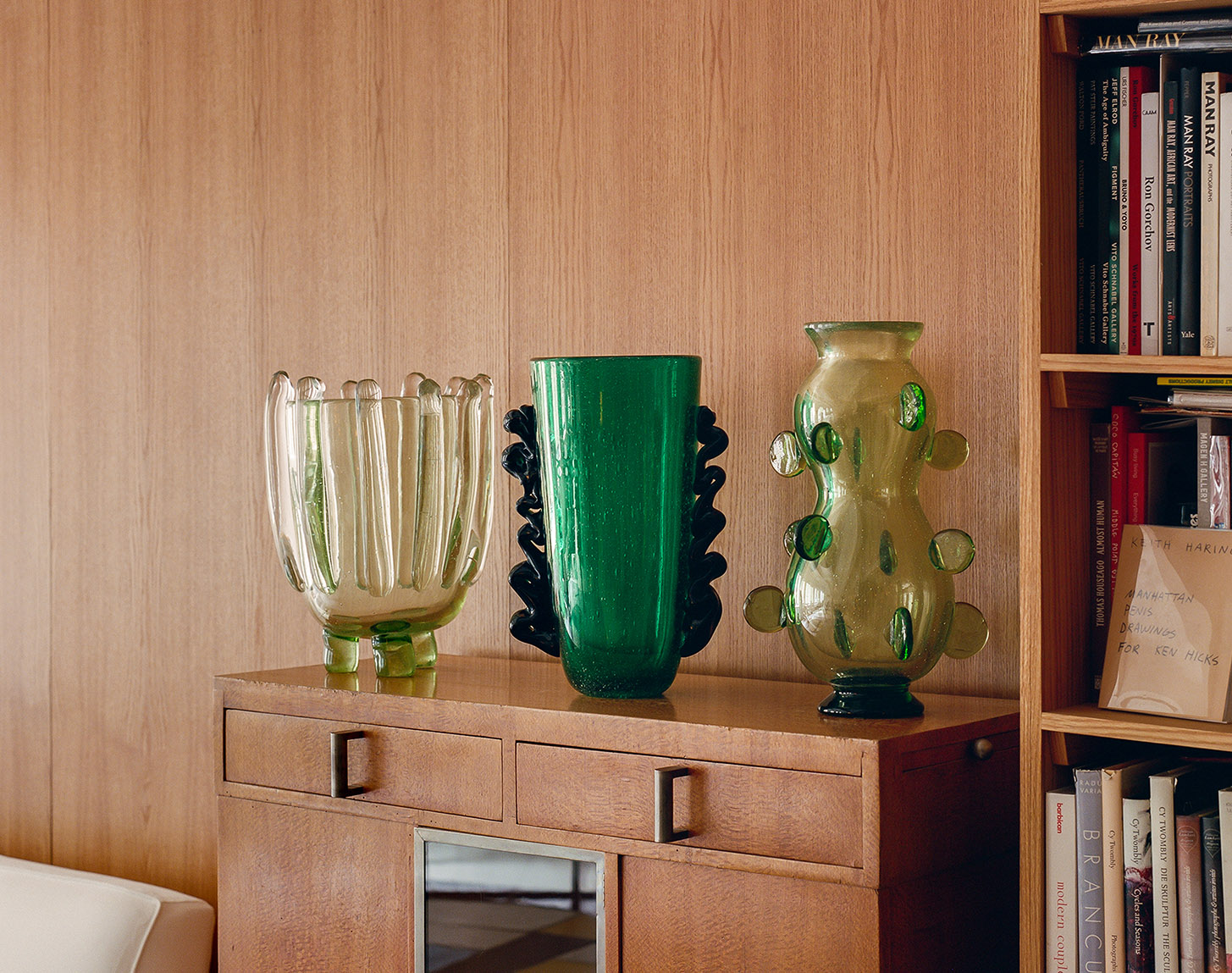 New York, dana-arbib.com
Arbib spent 10 years designing textiles as founder of the fashion label A Peace Treaty, but took a detour during the pandemic when she met a glassblower from Venice who promised to show her his craft. Two years later, she debuted her first collection in a Tiwa Select show at Michael Bargo: Called Vetra Algo — which translates to “seaweed glass” — the oversized glass vessels and plates come in shapes inspired by the North African artifacts of Arbib’s Libyan heritage and in colors that reflect the Venetian lagoon. They’re often adorned with globules, discs, or snakelike lines, and they were one of our favorite collections of 2022.

American design could mean anything and everything. It is an amalgamation of many different cultures and backgrounds being expressed. I am a part-Israeli, part-Libyan, part-Canadian, part-Italian, with parents living in the French Caribbean, and here I am practicing in the United States and producing in Venice, Italy. My gallerist, Alex Tieghi-Walker, is Welsh and Italian, and has lived all over the place, but explores craft in the USA. American design is an expressive exploration of cultures and viewpoints, anchored in the “now,” but in reality drawing from infinite worlds and backgrounds.

I’m excited to start making lights! Vases and vessels felt like a great introduction to my career in glass, and now I’m ready to make things a bit more complex. I’m going to be going back to Murano to practice developing these new works, and I’m also looking forward to my second solo show in Summer 2023.

I try to create work that feels timeless and modern. Something you want to hold onto and pass down generationally. I am inspired by old masters in my craft and antique North African and Roman vessels, which speaks to my cultural heritage; the city of Venice, which speaks to where they are produced; and the aesthetic language by which my mother and father raised me, through their taste in art and design. Everything from the bespoke tailor in Rome, to an Egyptian relic, to designer Bauhaus pieces.

My first show in May was inspired by the Venetian lagoon and the forms and colors of the seaweed that grows beneath the surface. Right now I’m inspired by rooted forms that grow out of soil: gourds, vegetables, fruits, and seed pods. 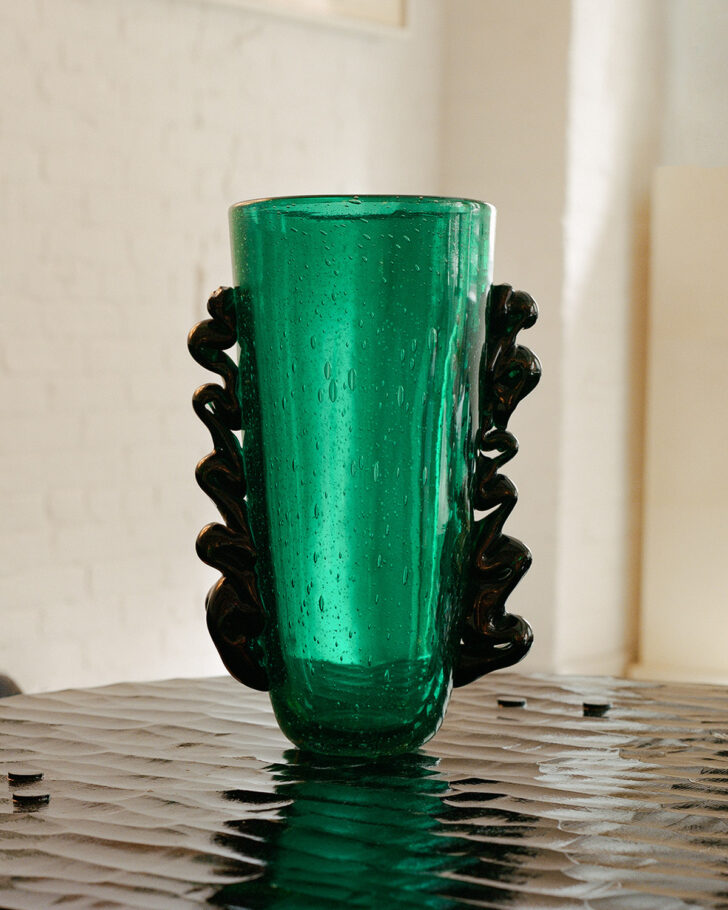 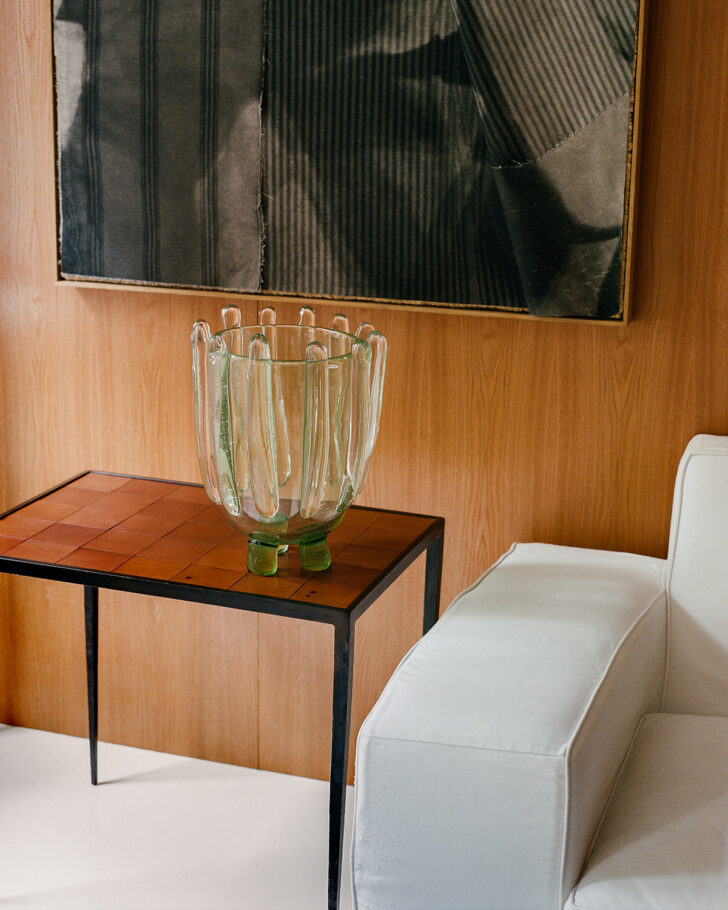 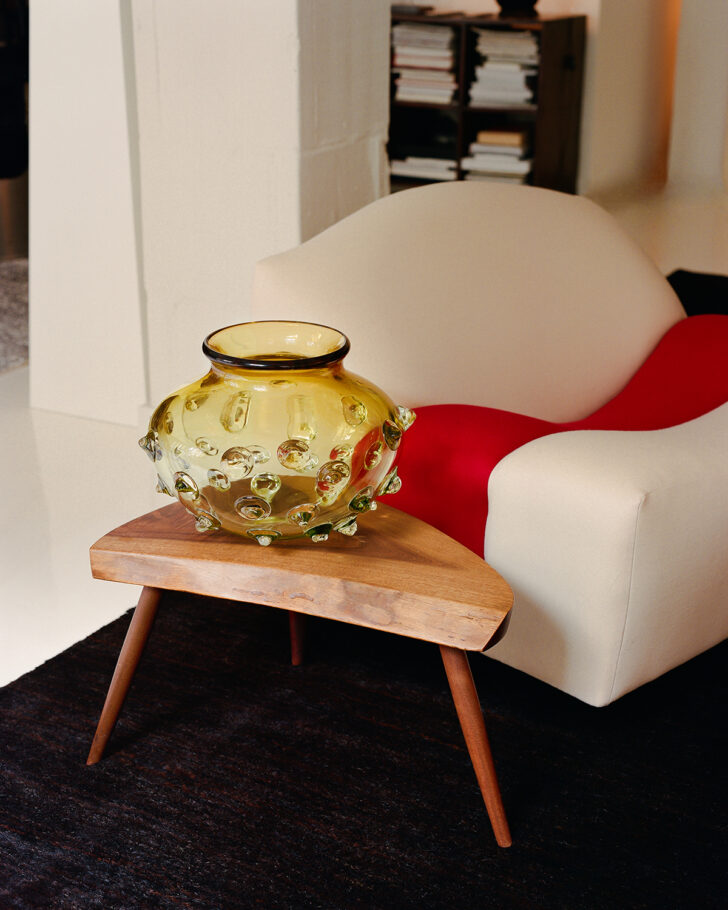 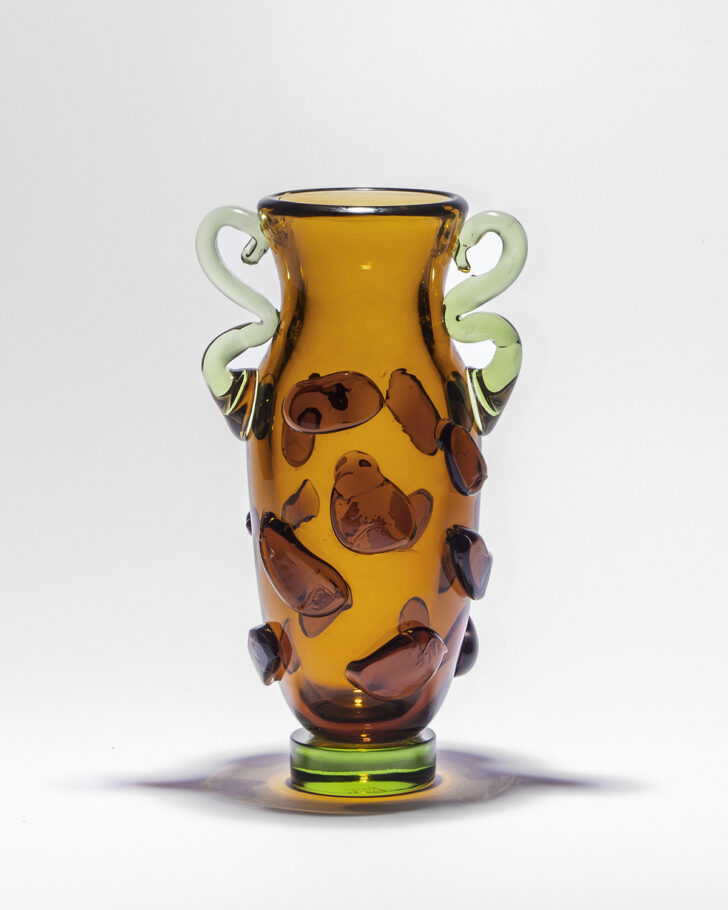 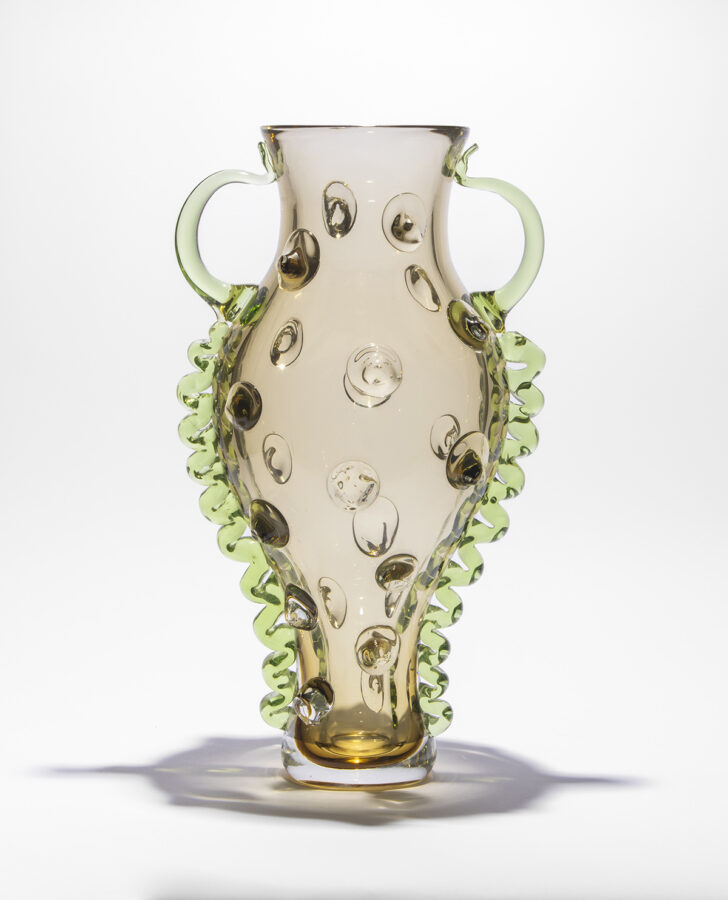 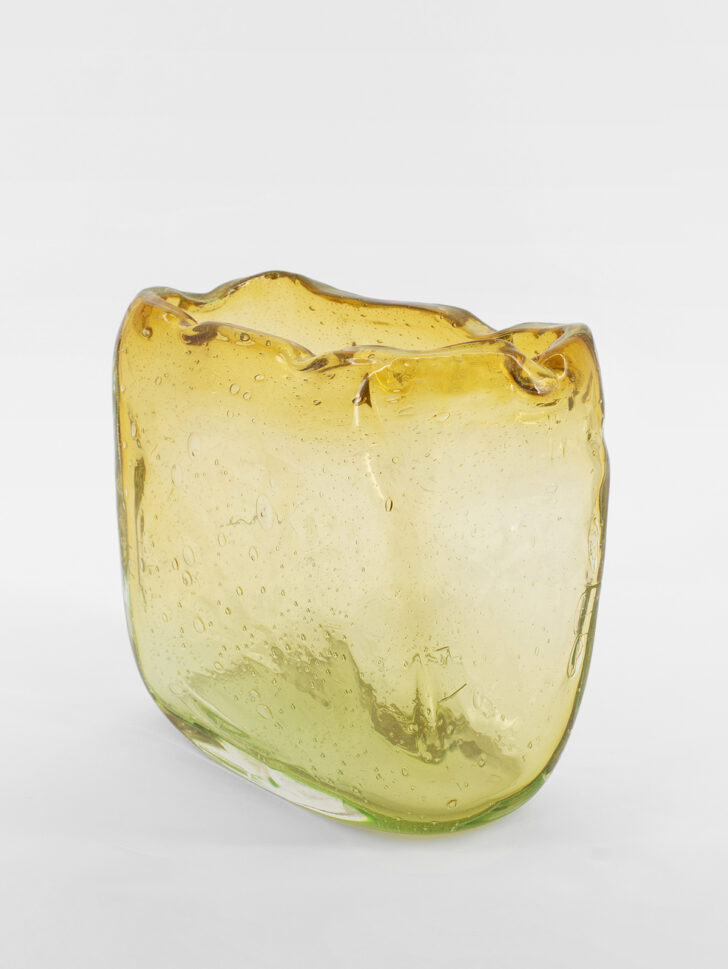 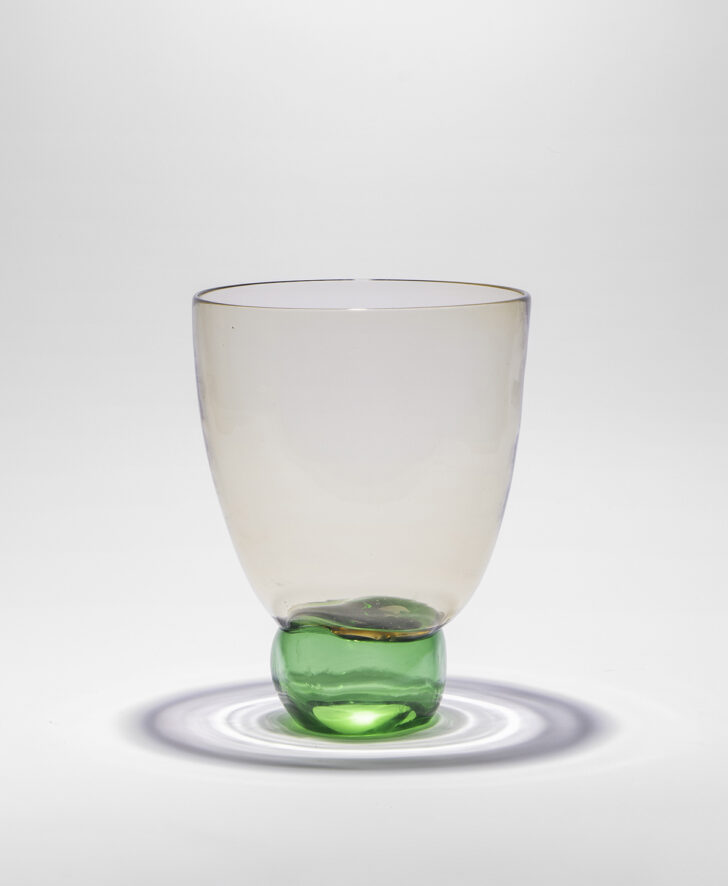 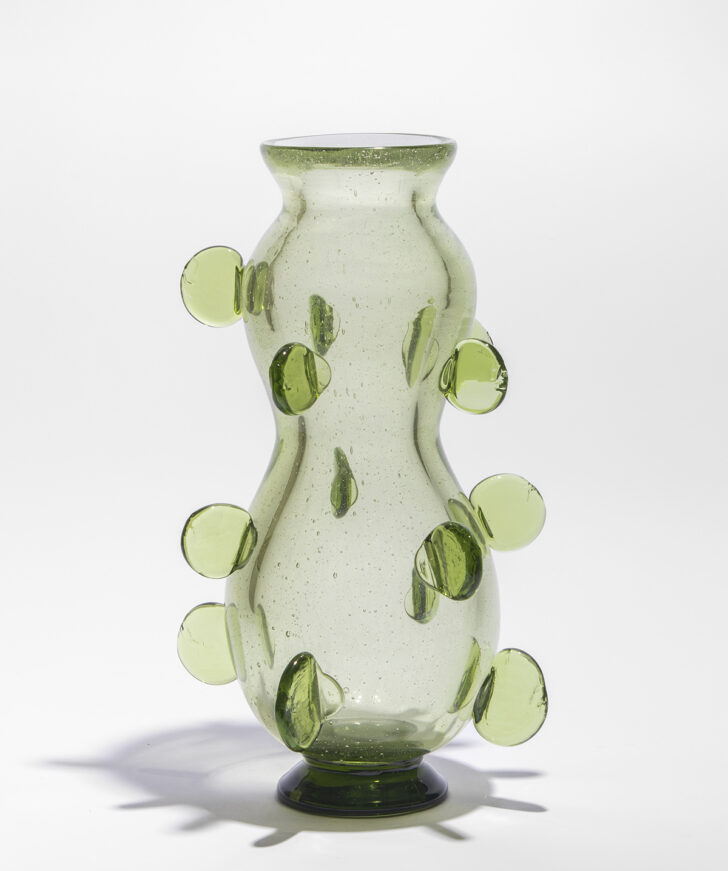 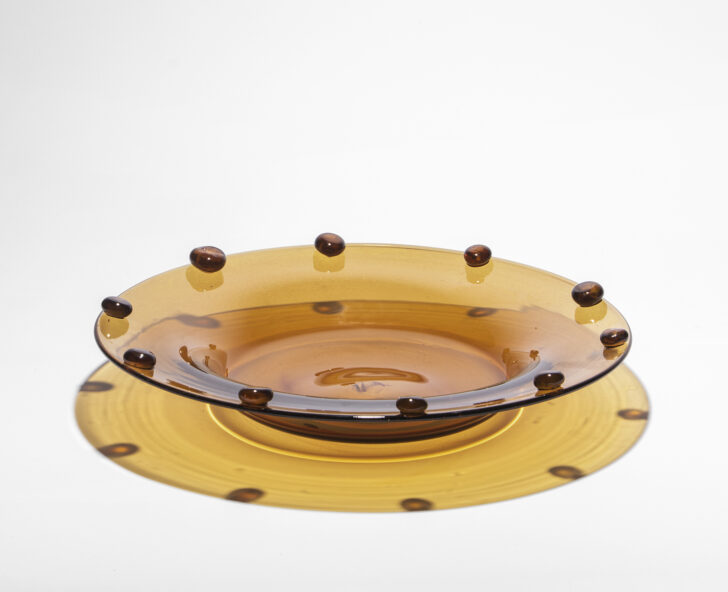 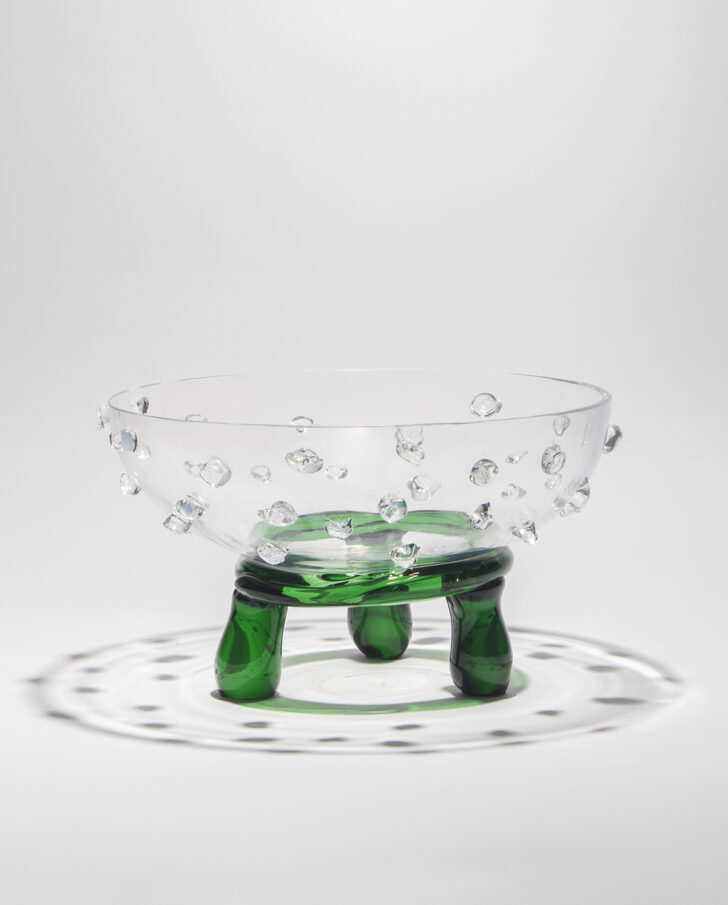 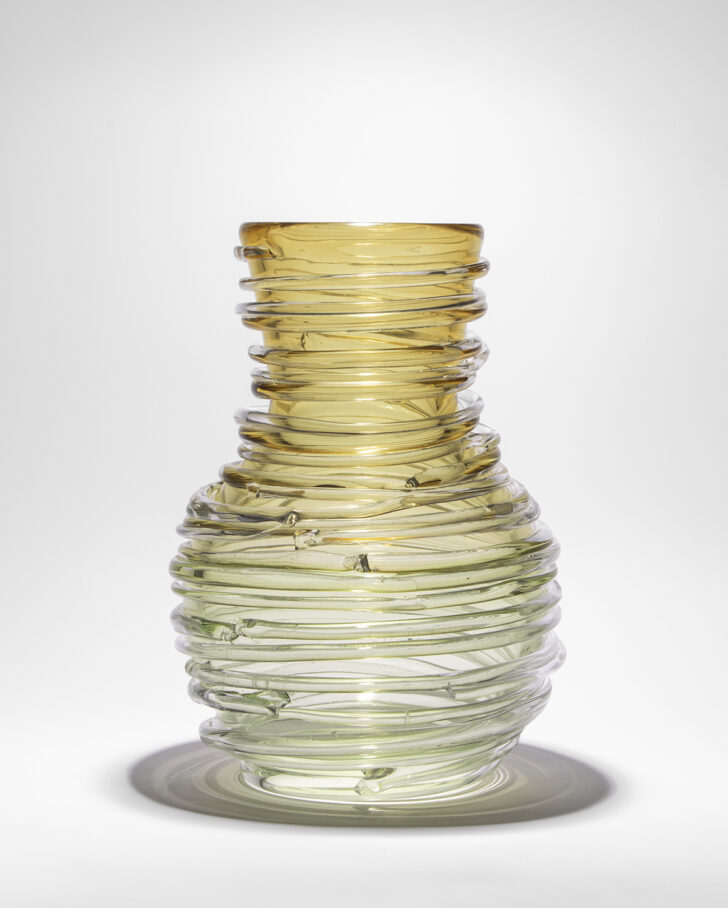 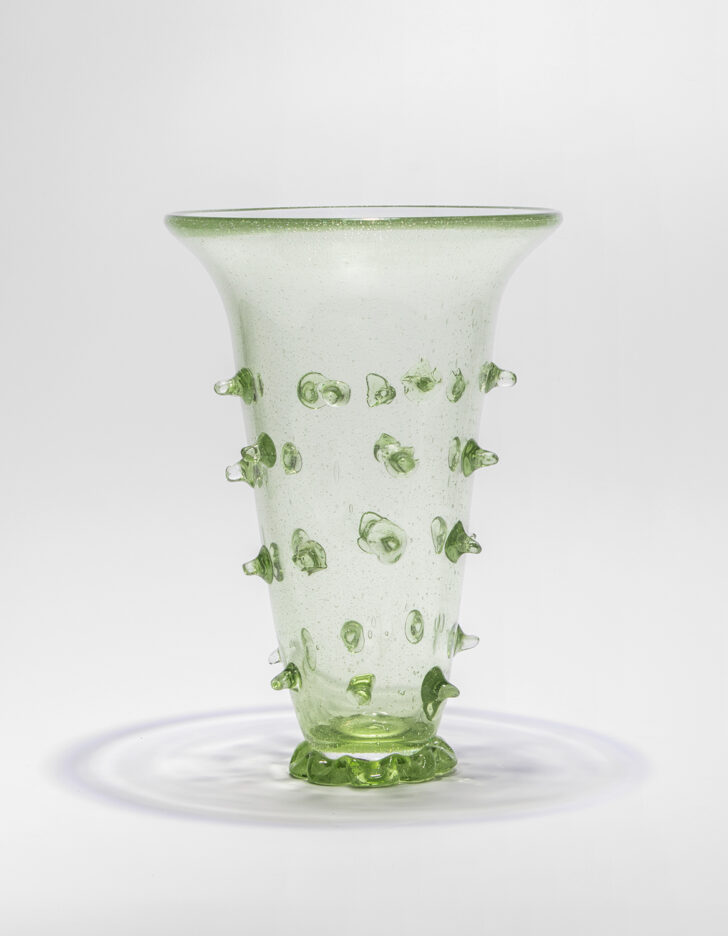 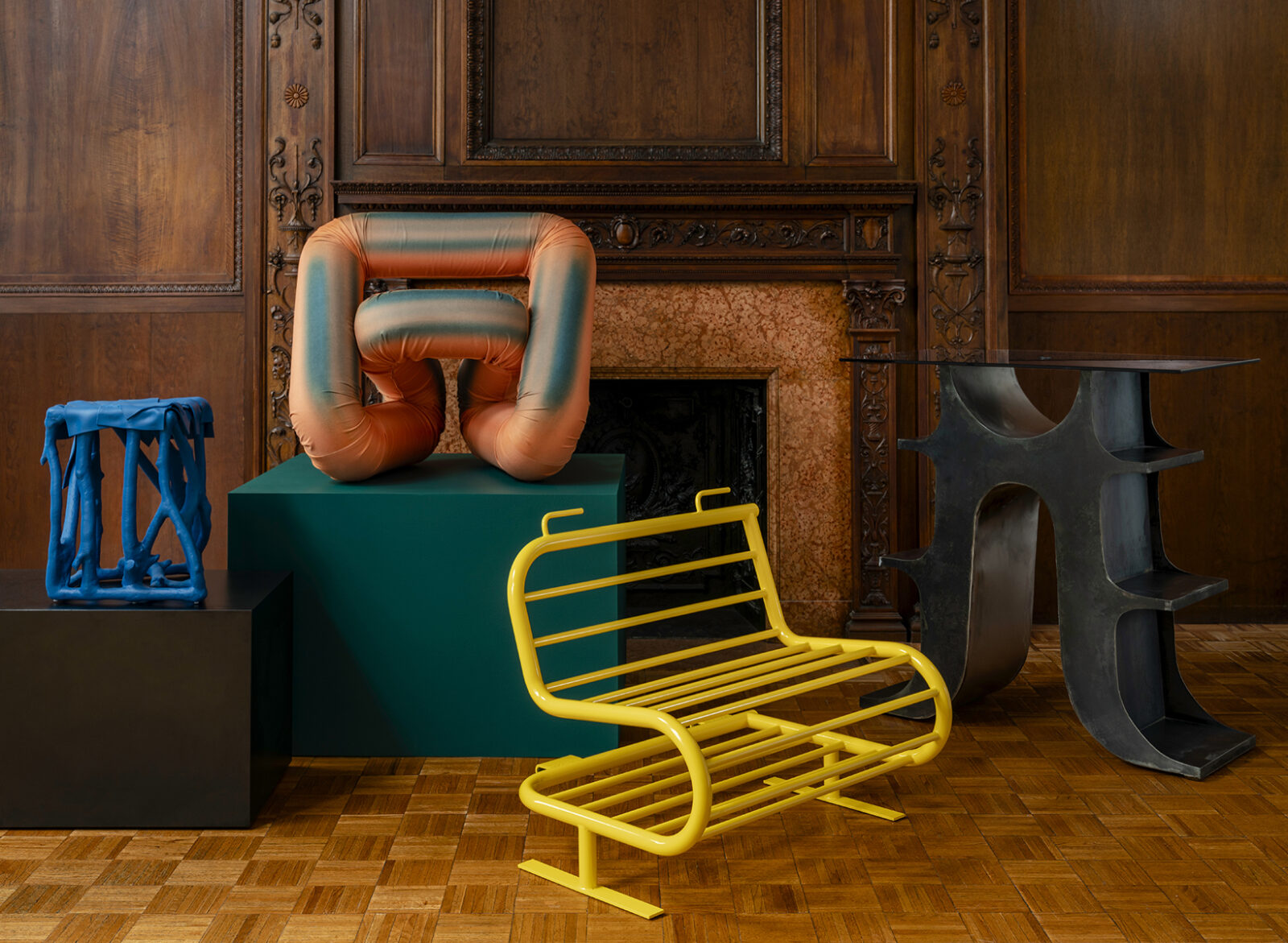 New York Design Week, We Missed You — Here Are 25 Favorites From the Festival That Was

Well, after two years of fallow Mays due to COVID delays (and a November iteration of NYCxDesign that barely registered), New York Design Week returned with a vengeance this month. Its de facto kick-off was the incredible MASA exhibition, curated by Su Wu, which opened in a former post office in Rockefeller Center and remains a high-water mark for the month. The festivities finally ended last week with a rager of a party at Matter Projects for a dual exhibition with furniture designer Minjae Kim and his mother, the painter Myoungae Lee, which we'll cover more in-depth on the site this week. Here are our favorite projects from the past few weeks.
More 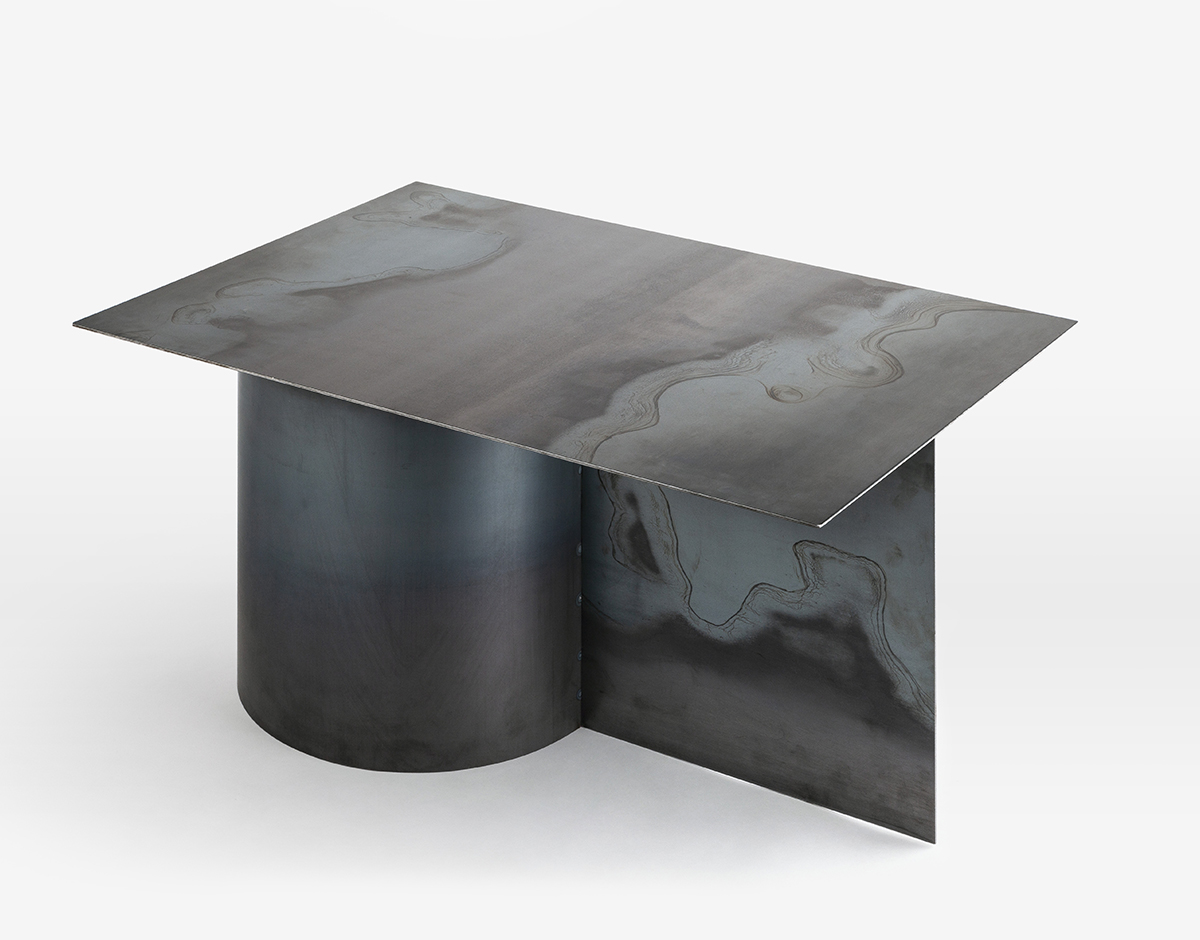 One of Cara Judd and Davide Gramatica of Cara\Davide’s most memorable projects quite literally started in a scrap heap. “We were visiting an artisan who works with metal for another project and we came across a piece of leftover iron with an interesting patina,” says Gramatica of the offcut that would inspire their Calandra collection. “For them, it was rubbish, but between us, we said, why not?”
More 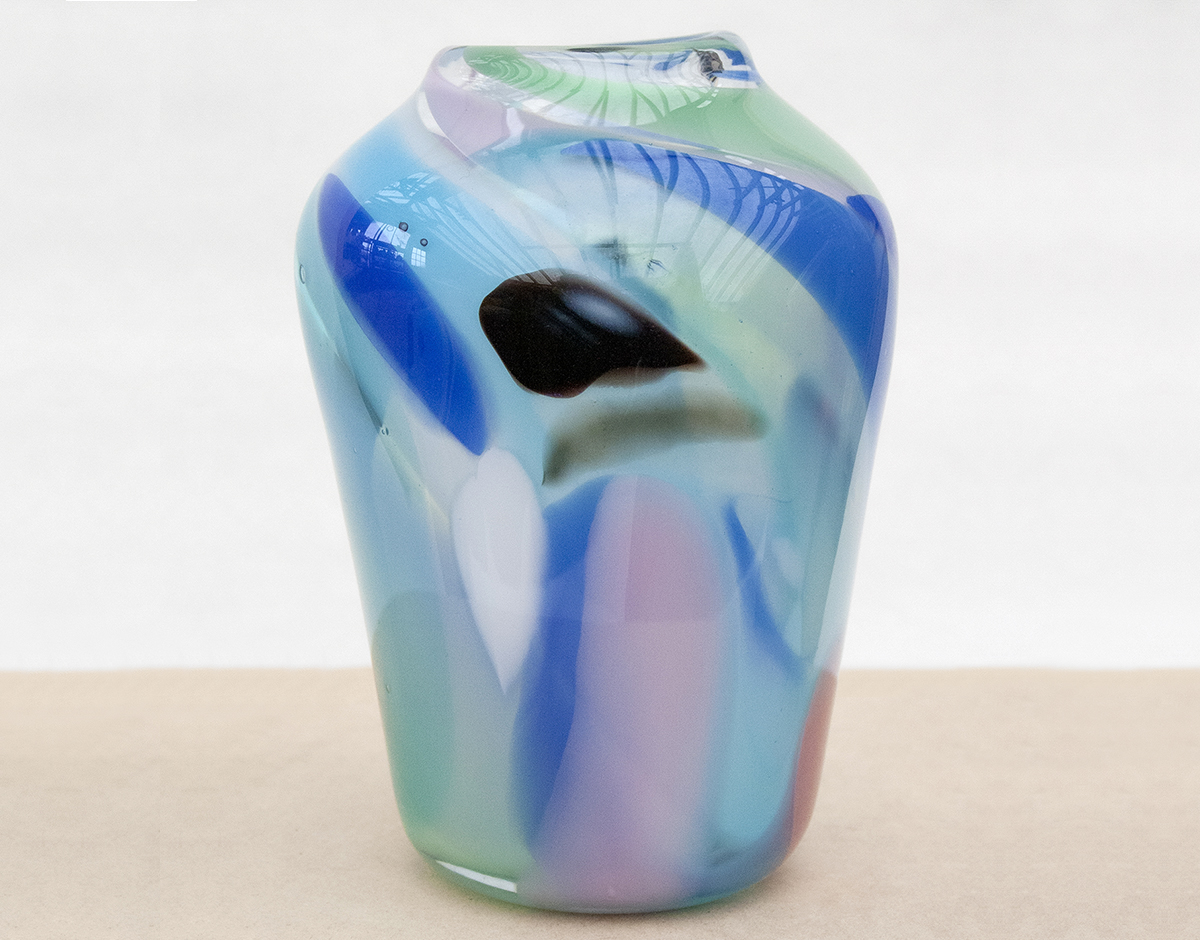 Peter Gudrunas Has Been Blowing Glass Since the 1970s. Now His Daughter is Helping to Bring Their Practice Into the 21st Century.

The 2008 financial crisis wiped out the majority of Gudrunas’ clients, and in the following years the interest in buying fine crafts sputtered. It wasn’t until 2014 that the business was revived, when his youngest daughter, artist and filmmaker Iris Fraser-Gudrunas, stepped in to manage, eventually developing a vision for how Sirius Glassworks could evolve.
More