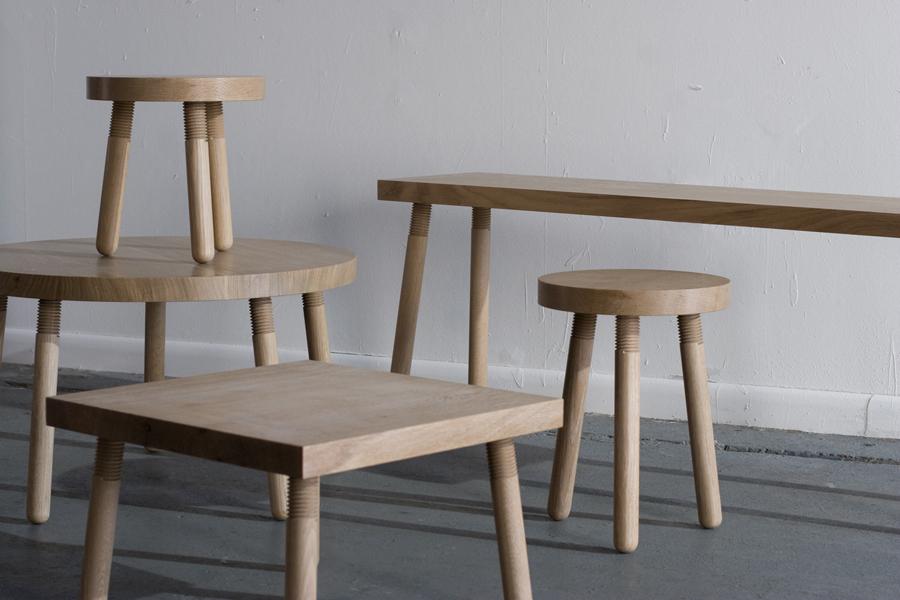 Jonah Takagi claims he has ADD, and he may be right. Since graduating from RISD in 2002, the Japanese-born, New England–bred, Washington D.C.–based designer has worked as a cabinetmaker, a full-time musician, a set builder for National Geographic docudramas, and a producer for an indie-rock kids’ show called Pancake Mountain. In the weeks leading up to this story, we talked about skinned cats, prosthetic kidneys, and smoking pot out of an art-school lecturer’s peg leg.

But Takagi’s work is anything but schizophrenic: In the past year, under the label Atelier Takagi, the designer has turned out a growing collection of tables, chairs, lamps, and shelves, mostly inspired by the mundane (Tinkertoys, wooden brooms), all elegant yet somehow tough at the same time — basically the kind of pieces that don’t go unnoticed for long. In January, Takagi was picked to show as part of an emerging designers’ showcase at the furniture trade fair IMM Cologne, and his American Gothic table was selected for a design show at Paris’s Gallery Triode. At next month’s International Contemporary Furniture Fair, he’ll debut that piece along with his colorfully corded Spun table lamp for Matter Made, the new in-house collection from New York design boutique Matter. He’s also the subject of his first major magazine profile and about to receive a sweet cash infusion from an emerging design award, granted jointly by the forthcoming trend site Stylus and Bernhardt Design. Not bad for a boy from the Beltway.

About that D.C. thing: “I came because of a girl,” he says. “I had been living in Portland, Oregon, and when it didn’t work out, I was kind of resentful. Portland was like utopia.” But the D.C. life has grown on Takagi, who has found a glut of talented fabricators up in Baltimore, and whose low overhead has enabled him to actually produce his own designs. He still works as a set designer for theater and film, and in that workshop he’s carved out a small place to build small prototypes on-site. Besides, he says, “Not that I need to feel special, but you do feel a little different in D.C. You go to Brooklyn, and there are a lot of people who look like me and are just as confused as I am about most everything. It’s a little weird.”

Event that inspired you to be a designer:
“It wasn’t so much a moment as a choice. When I had to choose a focus in school, I was torn between sculpture and architecture. I liked the technical side of architecture, but I wanted to make things myself. I loved the freedom of sculpture but couldn’t stomach a fine arts degree and a mountain of debt. I split the difference and studied Furniture Design. It seemed practical, and if all else failed I could swing a hammer.”

Design hero:
“Joe Davis. You might call him the resident free spirit at MIT in Boston. He’s in his sixties, and the lore is that he walked into MIT one day and they called the police. Before the police arrived, he’d gotten an assistant professorship. Anyway, he was a guest lecturer at one of my classes at RISD, and he blew my mind. He has this primordial clock thing — he believes that if life can spontaneously self-assemble, then simpler things like clocks should be able to as well. So he has all these clocks and he’s just waiting for them to self-assemble. I’m actually really interested in science, and Joe Davis is the best of both science and art.”

Favorite material to work with:
“I don’t have a favorite material. New materials and new techniques keep me interested. If I were 15 years younger, I probably would have been prescribed something.”

Fictional character who would own your work:
“Howard Roark from Ayn Rand’s The Fountainhead. He’s a super-modern architect who has to deal with people who are very traditional and want all the fluted columns and the trappings of traditional stuff. He was fiercely independent about what he wanted, and I’ve always admired that.”

Favorite shop:
“Both in Portland, Oregon: Stumptown at Crowsenberg’s Half and Half, and Powell’s Books.”