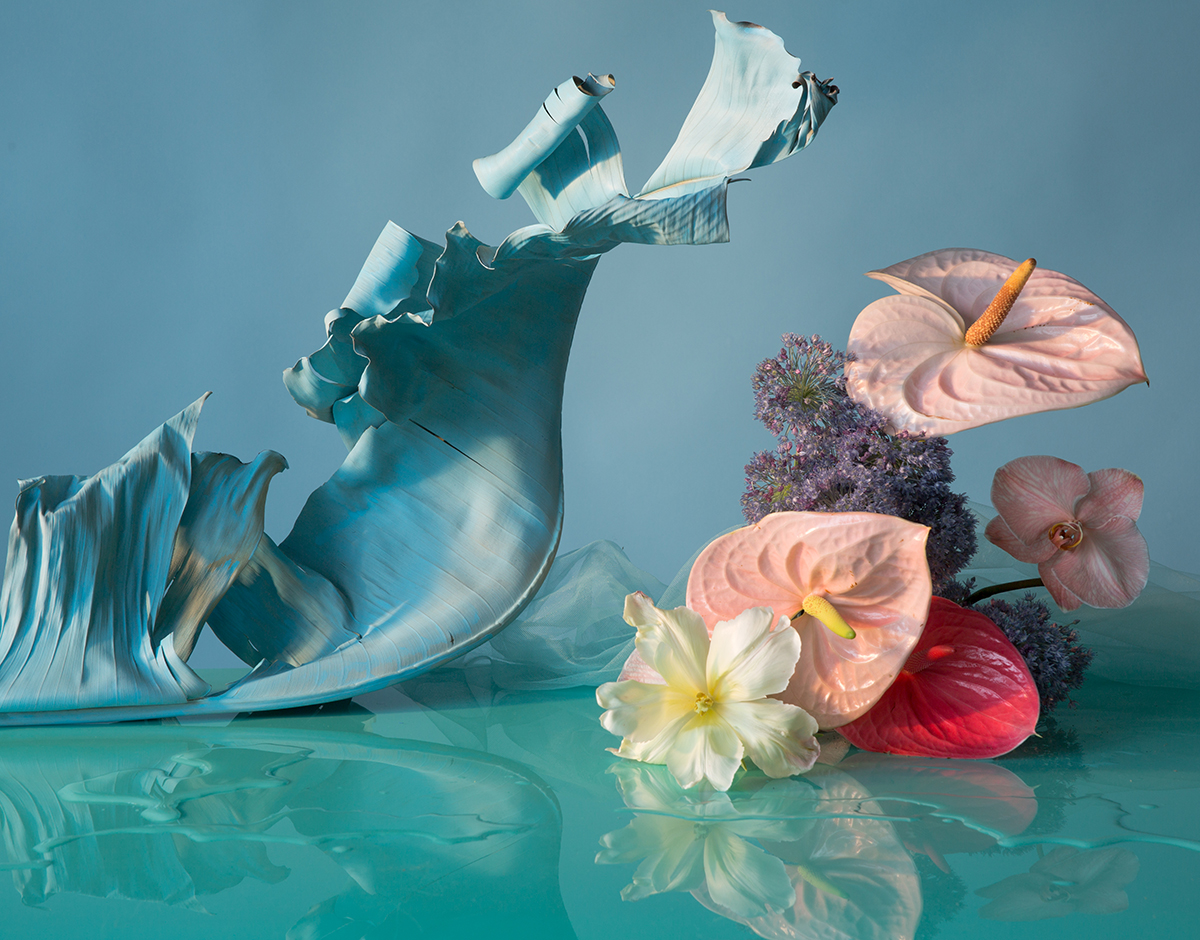 Doan Ly‘s floral still life photographs could, in a way, be read as contemporary vanitas paintings — compositions of hyper-saturated bouquets, exotic fruits, and colored lights whose addictive, saccharine appeal might symbolize the fleetingness of beauty, and of Instagram culture itself. Yet we prefer to look at it like Ly does: The world is a shitty, shitty place right now, so let’s all just take a sec to enjoy some insanely pretty flowers, okay? It appears the internet agrees with her, too, considering that since she began posting her stylized still lifes on Instagram a few years back, she’s amassed more than 60,000 followers and landed commissions for brands like Gossamer magazine and Loeffler Randall.

The truth is that Ly never intended to be an artist — or a photographer, for that matter. Born in Vietnam, she studied acting after immigrating to the U.S. as a child, attempting to land parts in Los Angeles before a series of unfulfilling day jobs ended in her making a go of it as a florist in New York. The woman just loved flowers is all. First she taught herself photography in order to document her creations, and then she pushed her photography and her floral designs in new directions as an attempt to escape the monotony of typical, traditional wedding arrangements. It was as those attempts were amassing a cult following on Instagram that we first discovered her, a year ago.

With the rise of cool-girl florists and freakebana happening in the background, of course Ly’s work felt especially au courant to us, but it was our conversation with her, below, that helped us connect those trends back to the likes of Trump and the refugee crisis. Scroll down to read more about Ly’s approach, and what she’s up to next. 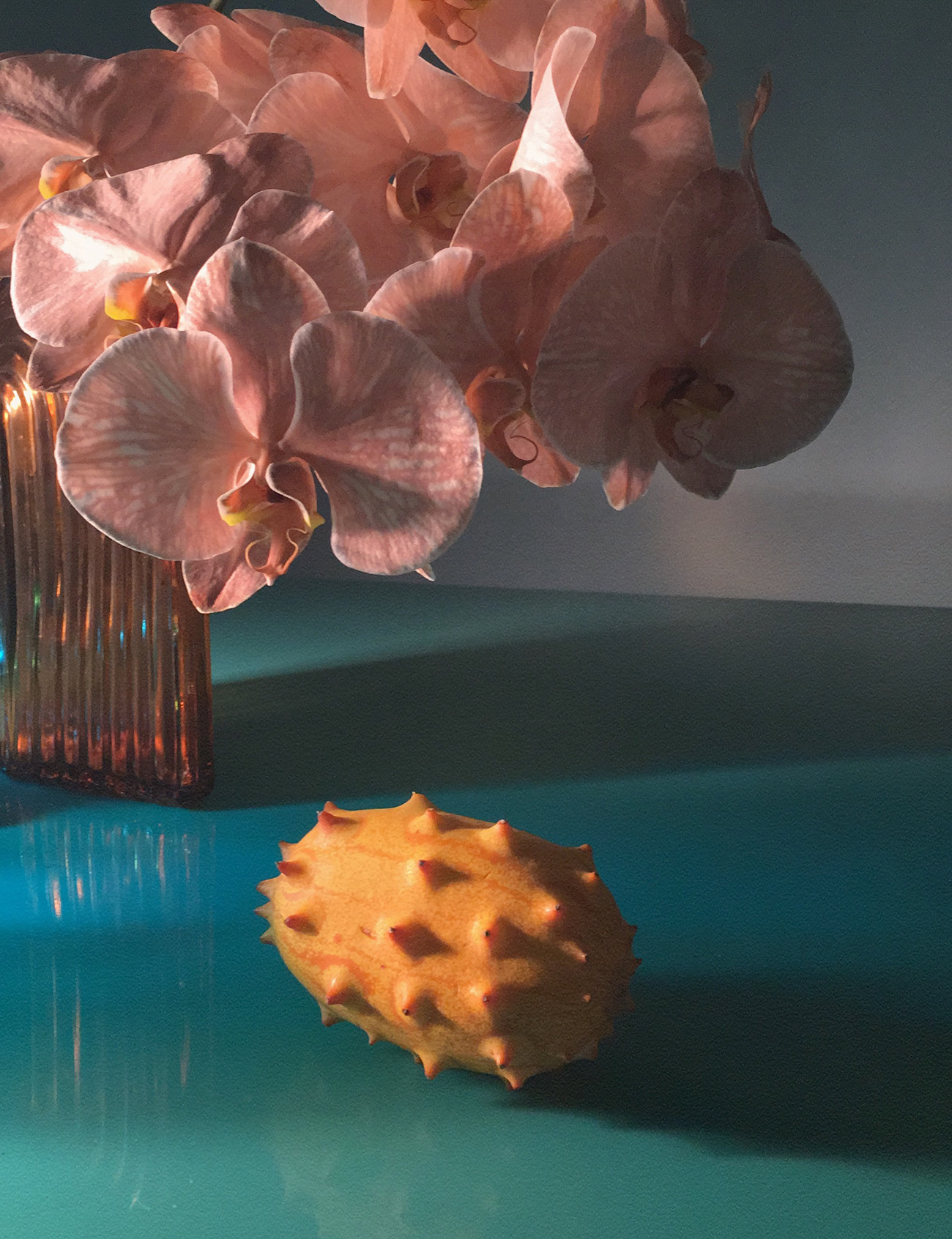 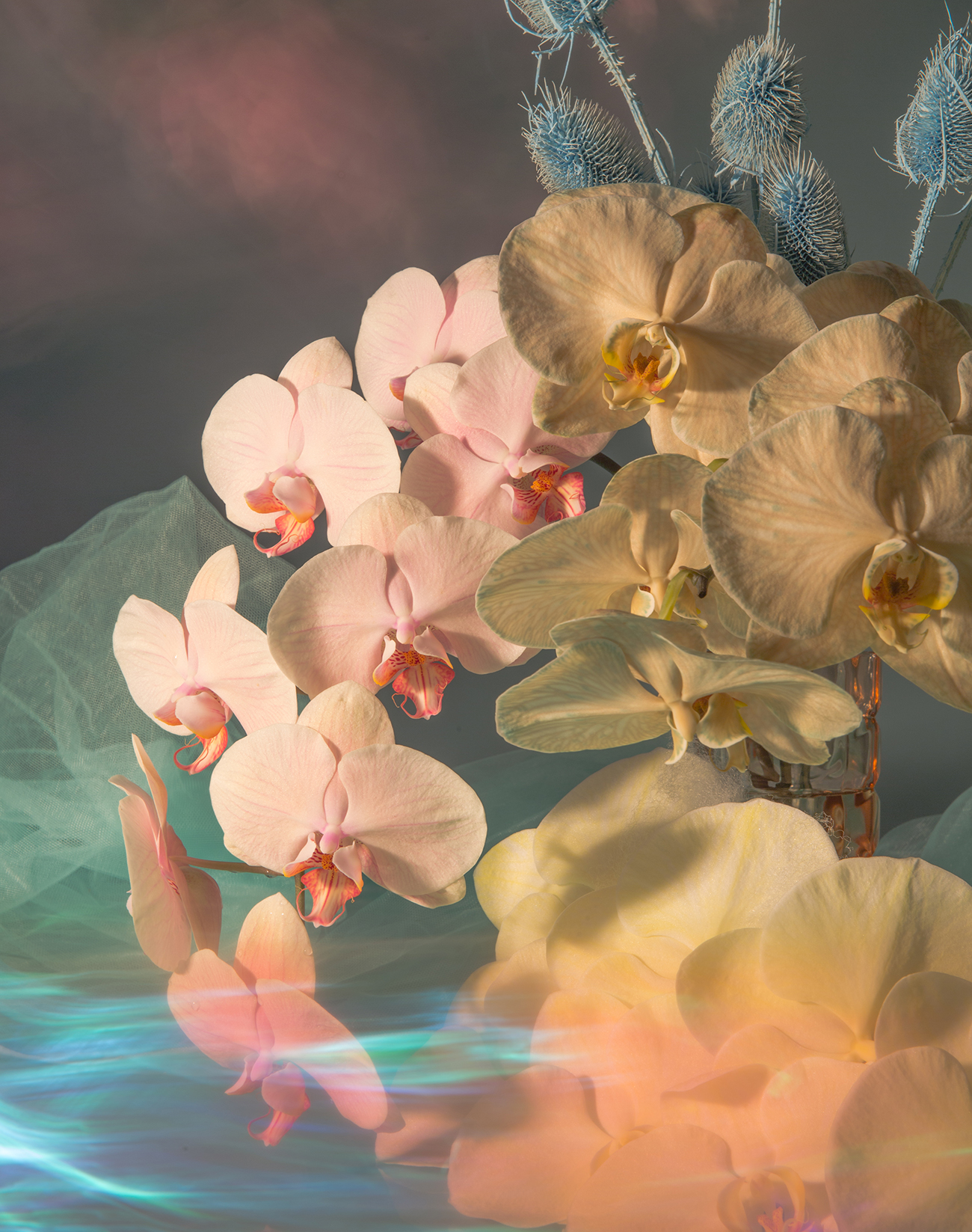 How would you describe your creative path until now?
Nonlinear. I’ve had so many different lives, all a bit unconventional. One thing has always lead to another in the most unexpected ways. Even photography was a surprise. There are people who have very clear paths, who go to law school and become partners at the firm. For me, I shift and pivot and tumbleweed into new experiences. Only when I look back can I see clearly how one pursuit serendipitously led me to another.

Can you tell us about your process and how it developed over the years?
I think my process has stayed the same — curiosity and play — but my eye has grown. I’d like to keep pushing myself past my comfort zone. It’s been such a crazy year that sometimes when I shoot, it has to be quick and dirty. I dream of having a month-long residency to tunnel through the obvious and land in some unexpected places.

What drives the choices you make in your work? I know you have a passion for pink and velvet. Color, textures, shapes, symbols, patterns?
Most of the time, my choices are driven by what I have around me in the moment. It’s often not so intentional, though I am drawn to color and texture. I often begin with something I have a little crush on that day. I may see a fun shipment of melons on my way to the subway, for example. Other times, I’ll choose one prop, like gloves, and explore a shoot around that. I often don’t have a final image in mind; it’s about letting the idea reveal itself. 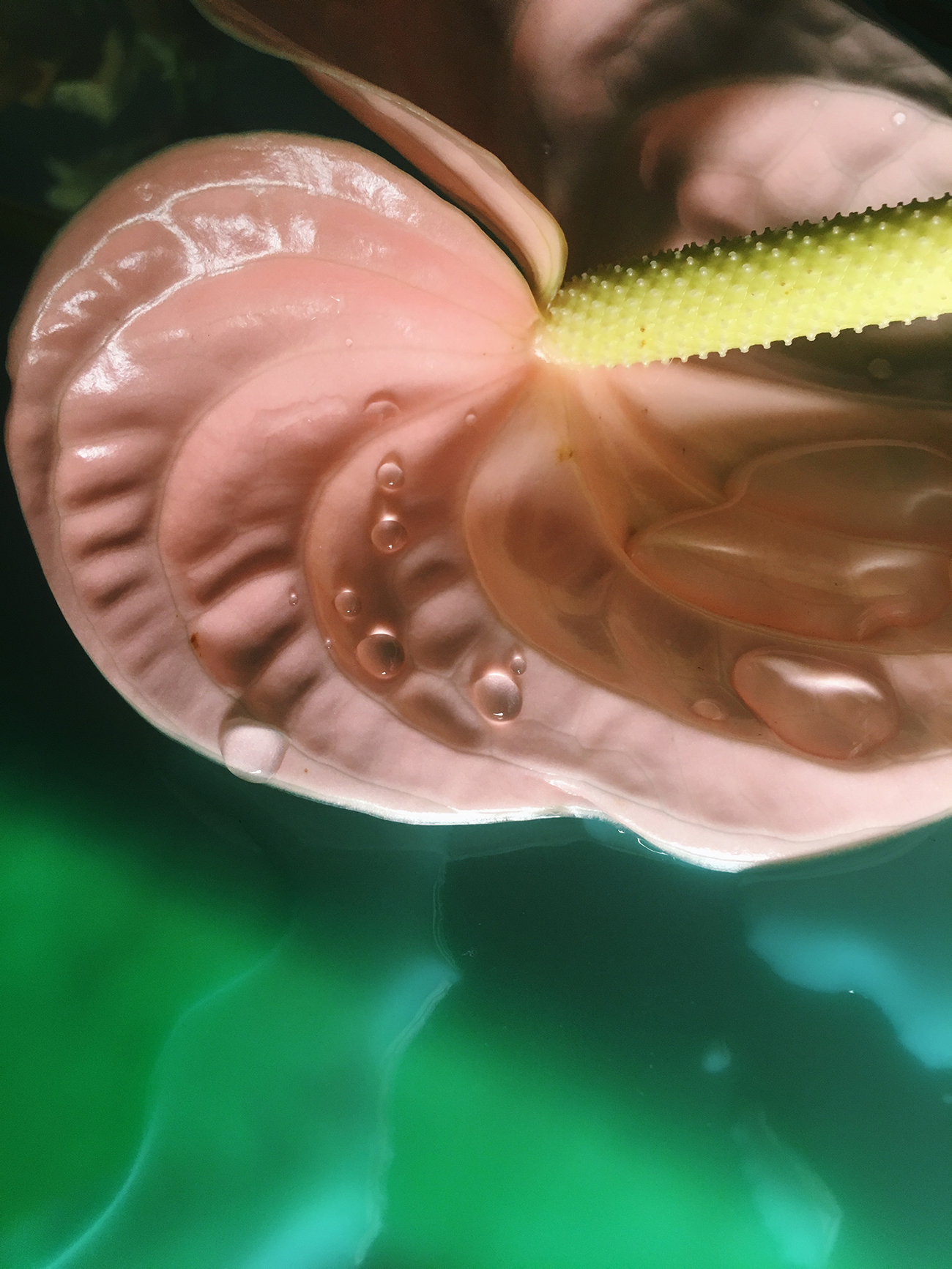 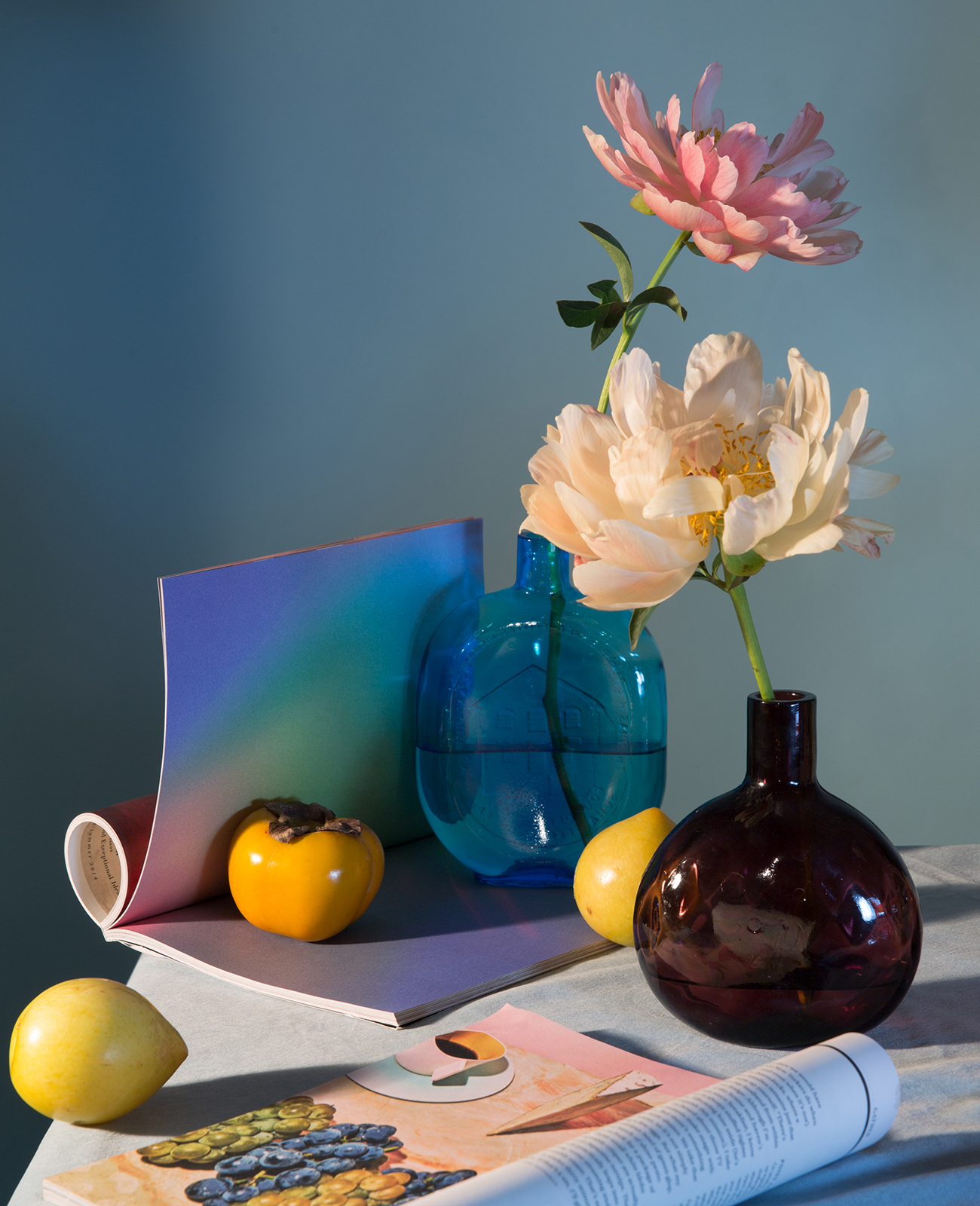 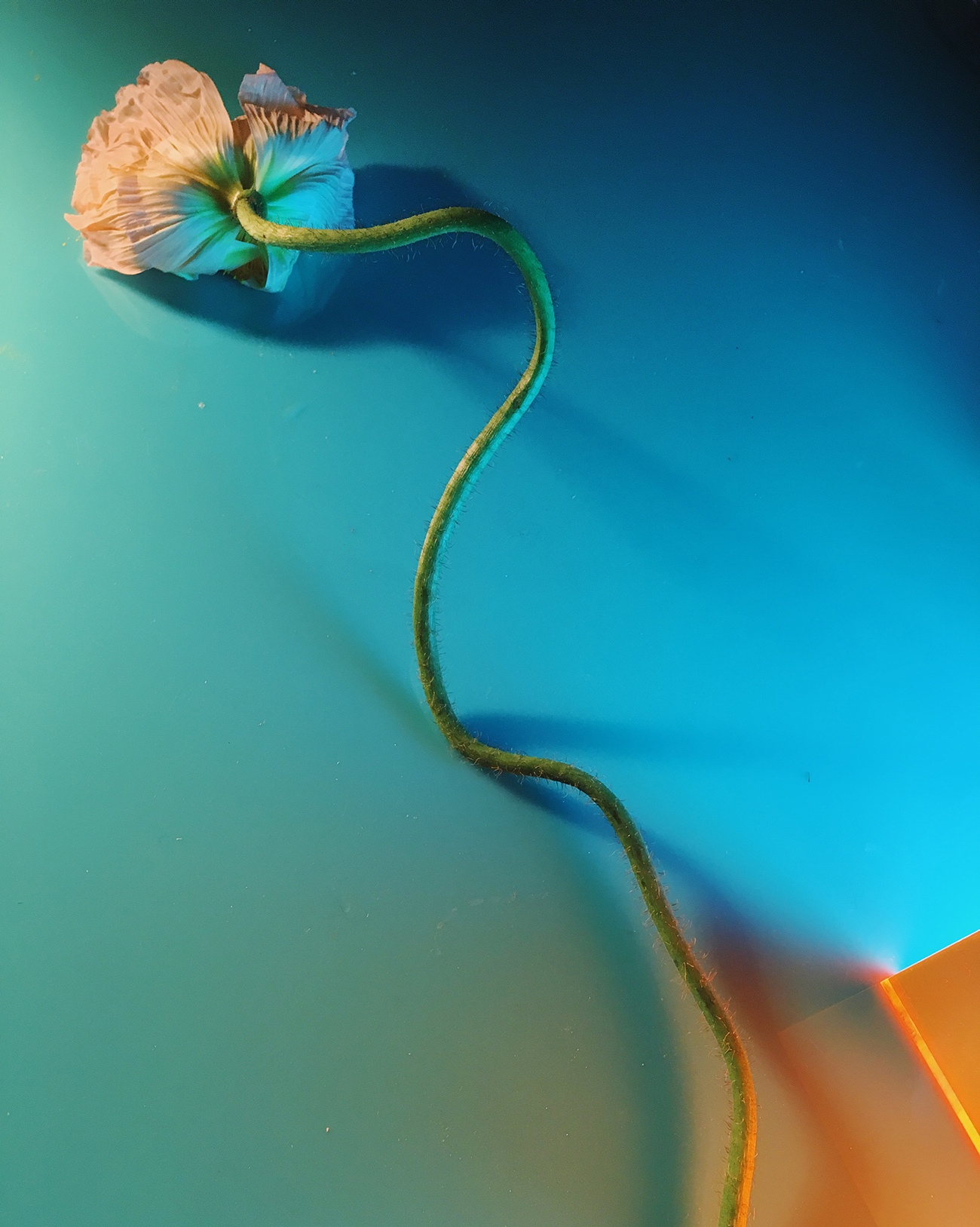 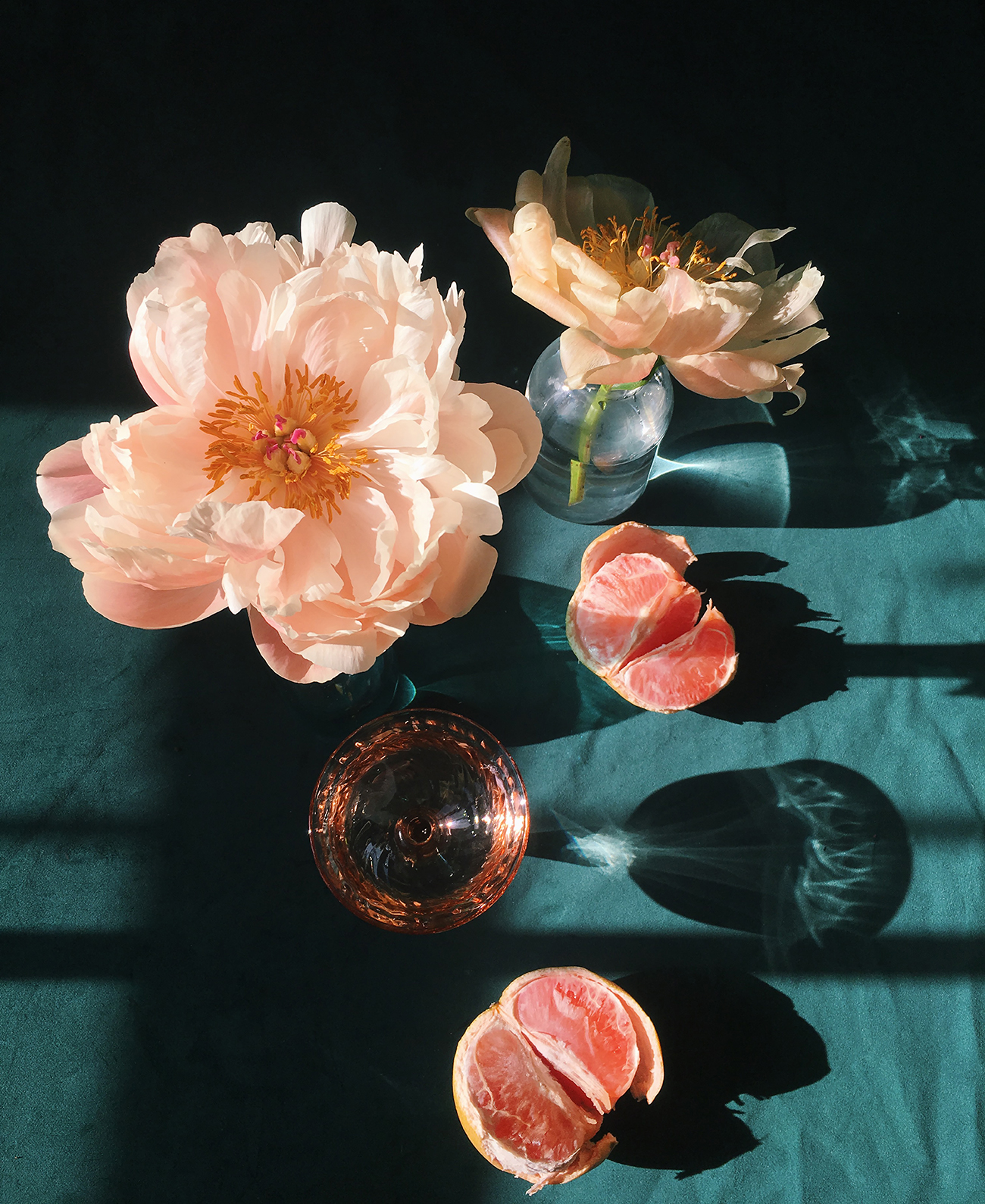 Can you unpack your stated objective of “redefining beauty” through your work? It’s all very easy on the eyes…
I was speaking specifically to a “wedding” audience, which adheres more or less to tradition and has a narrow aesthetic range for flowers. Within that context, I wanted to introduce a larger visual vocabulary. Within an art context, I’m fully aware that I’m not pushing envelopes in every shot, which is fine with me. I like beauty. The world can be rough, and I want to bring joy.

On that note, what’s the ugliest thing you’ve ever done, but loved?
If I loved it, I don’t think I would have found it ugly. I think there are images I’ve taken that are less commercial, or glossy, or may appeal less to an Instagram audience, that I’ve found very interesting and moving. One of them is a linen island I shot for Winsome Brave’s online shop. The image was dark and abstract and definitely not appropriate for an e-commerce site selling linen napkins, but to this day it’s still one of my favorite images.

There are also images that at first I hate, but then I grow to love. Years ago, when I started playing with super-saturated colors and non-naturalistic styling, I shot a green glass with a red anemone, a bright purple background, and a red tablecloth — definitely aggressively saturated. At first it felt very unpleasant. An artist friend of mine commented a bit later that he liked the new direction I was taking, and referenced the image saying it was at first very hard for him to look at, but that when that happens, it means there’s something discovered, something different that the eye has to adjust to, and that’s exciting. I look back and am so proud of my experimental self. 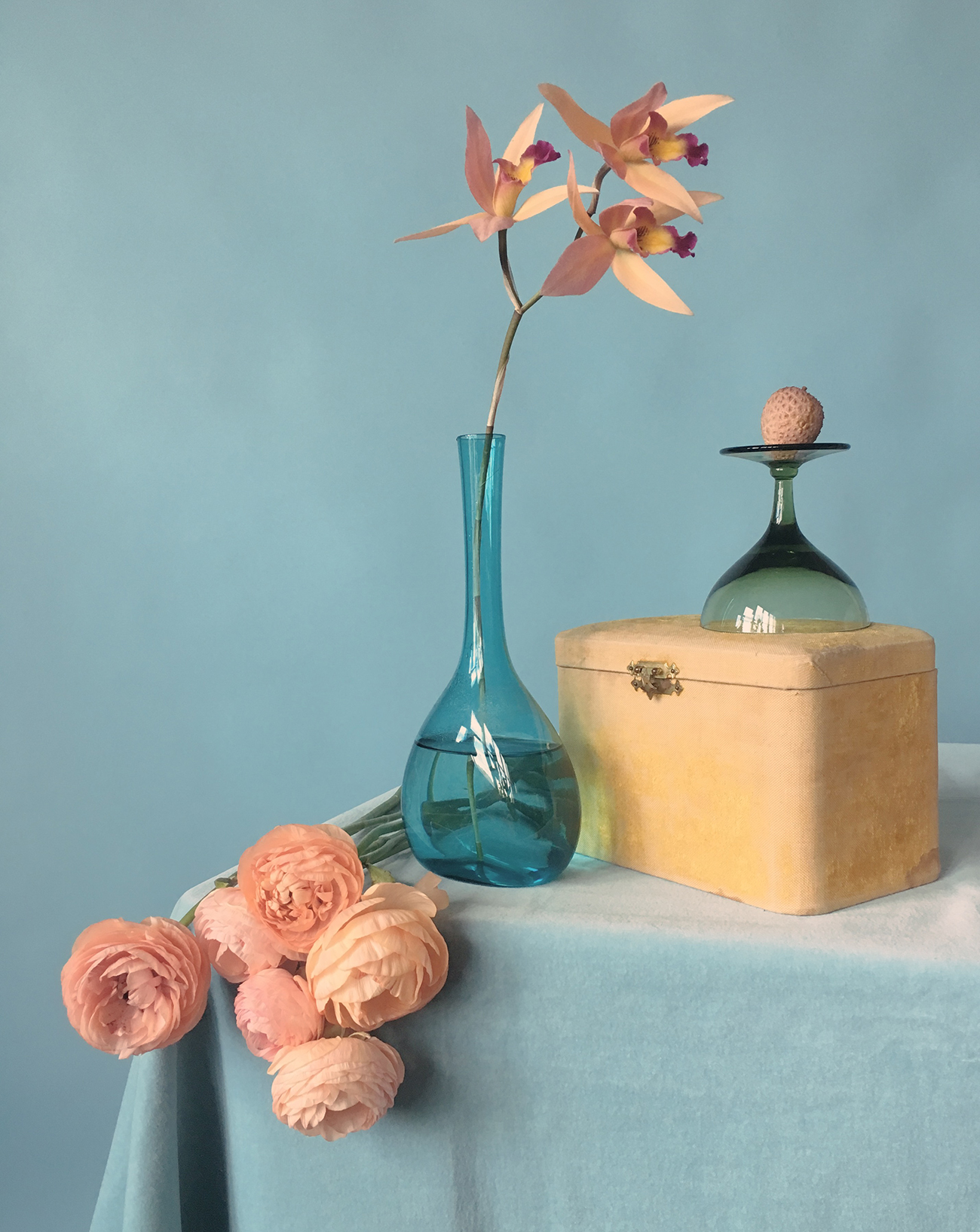 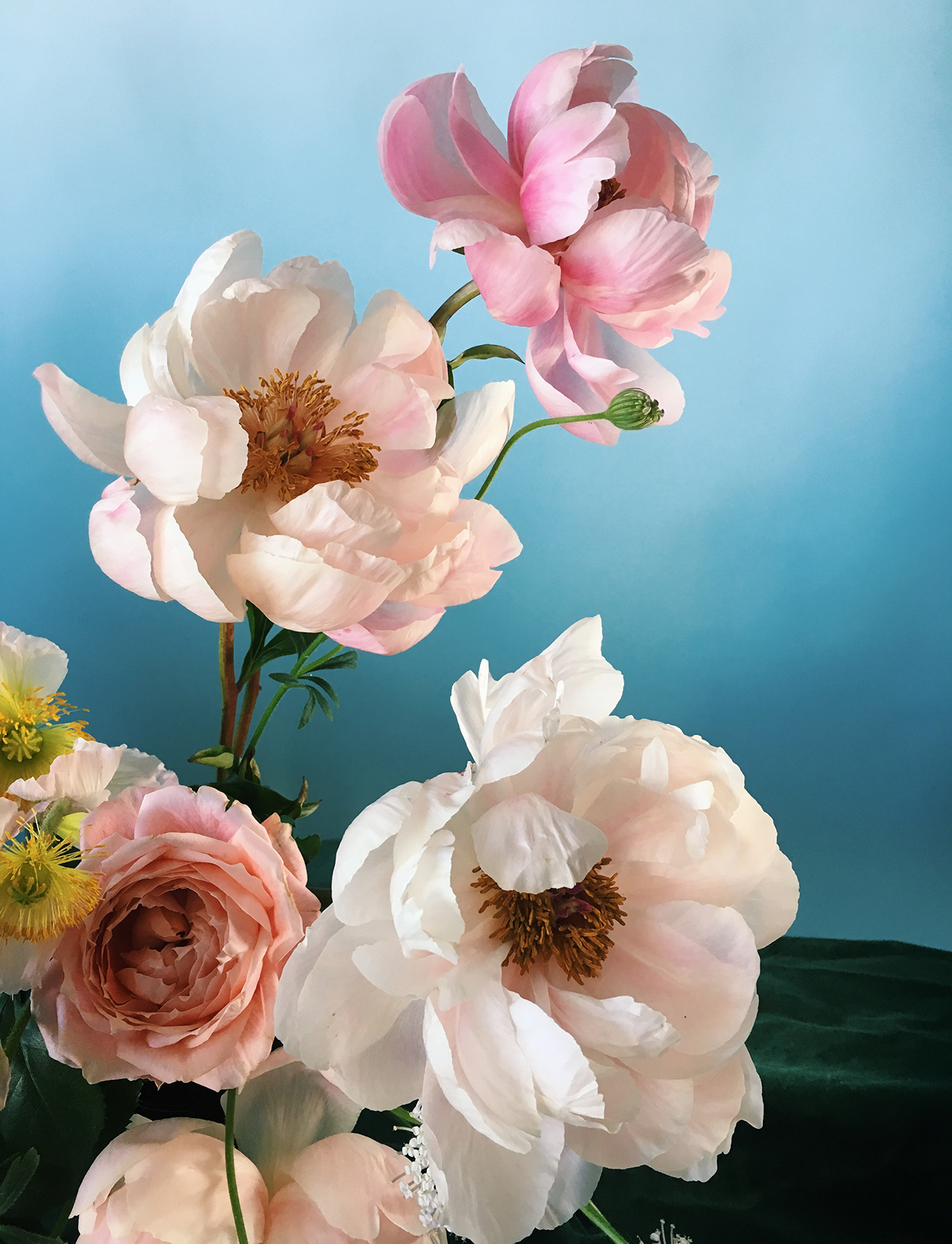 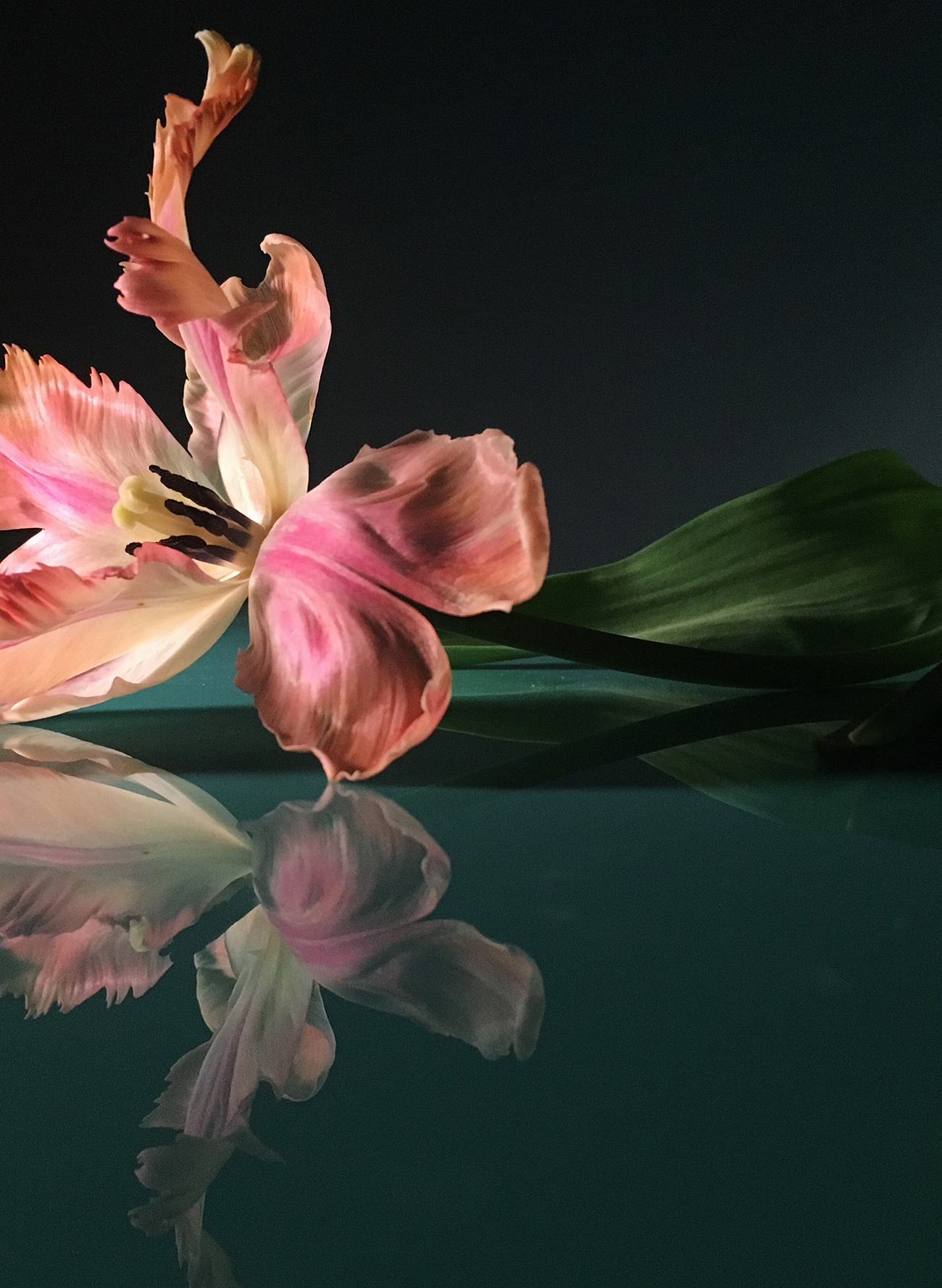 Which clients have pushed your work in an unexpected direction or prompted the most creative growth in your practice?
I think the really exciting shift happened when Winsome Brave asked me to shoot images for their shop. I had been doing more naturally lit, Vermeer-type still lifes. I was teaching myself composition and color, trying different textures. My old studio had amazing light, so I didn’t have to do much — basically just style objects in an interesting way. When Winsome Brave asked me to shoot, I’d moved to a new studio with drastically different winter light. It was impossible for me to recreate my comfort zone. I then started experimenting with different lights and reflective surfaces, and I came up with some dark, really alien images. Everything became much more abstracted. I went to Mars. It was so much fun. That was the start of seeing flowers in a different way.

Did you always intend to work across disciplines within the medium of floral design?
No! Starting my own business has transformed me in ways I couldn’t have even imagined. Teaching myself photography was just a way for me to document my work, because I didn’t have money to hire a photographer. Never in my wildest dreams could I have imagined it would lead to me getting hired to shoot campaigns for other brands. Never in my wildest dreams did I think I would get asked by Gather Journal, which I collected for years, to be a contributor.

I’ve been making short silly dance videos starring my design assistants as a way to relieve stress after a long day. It’s now my new obsession. It’s definitely something I want to keep exploring and developing. I don’t know in what way it will manifest in the next year, but it’s just so fun. It’s important to hold a space for it, for its own sake. In the same way as my past jobs have led to my current life, I trust in following curiosity, without preconceived plans.

Aside from doing floral design you’ve done some collaborative projects for Loeffler Randall, Gossamer magazine — how does that conversation start?
Brands approach me for my specific style which seems like a good fit for their particular project, as brands do. I inhabit a niche arena of floral still life with a modern sensibility, and that’s having a moment, so I’m lucky to be getting some attention. The conversation is often about merging their product into my world. With editorial commissions like the ones I did for Gather Journal and Gossamer, I was lucky enough to get carte blanche. I was given a basic theme, but the editors gave me “you do you” permission, which is simultaneously the most fun and the scariest. 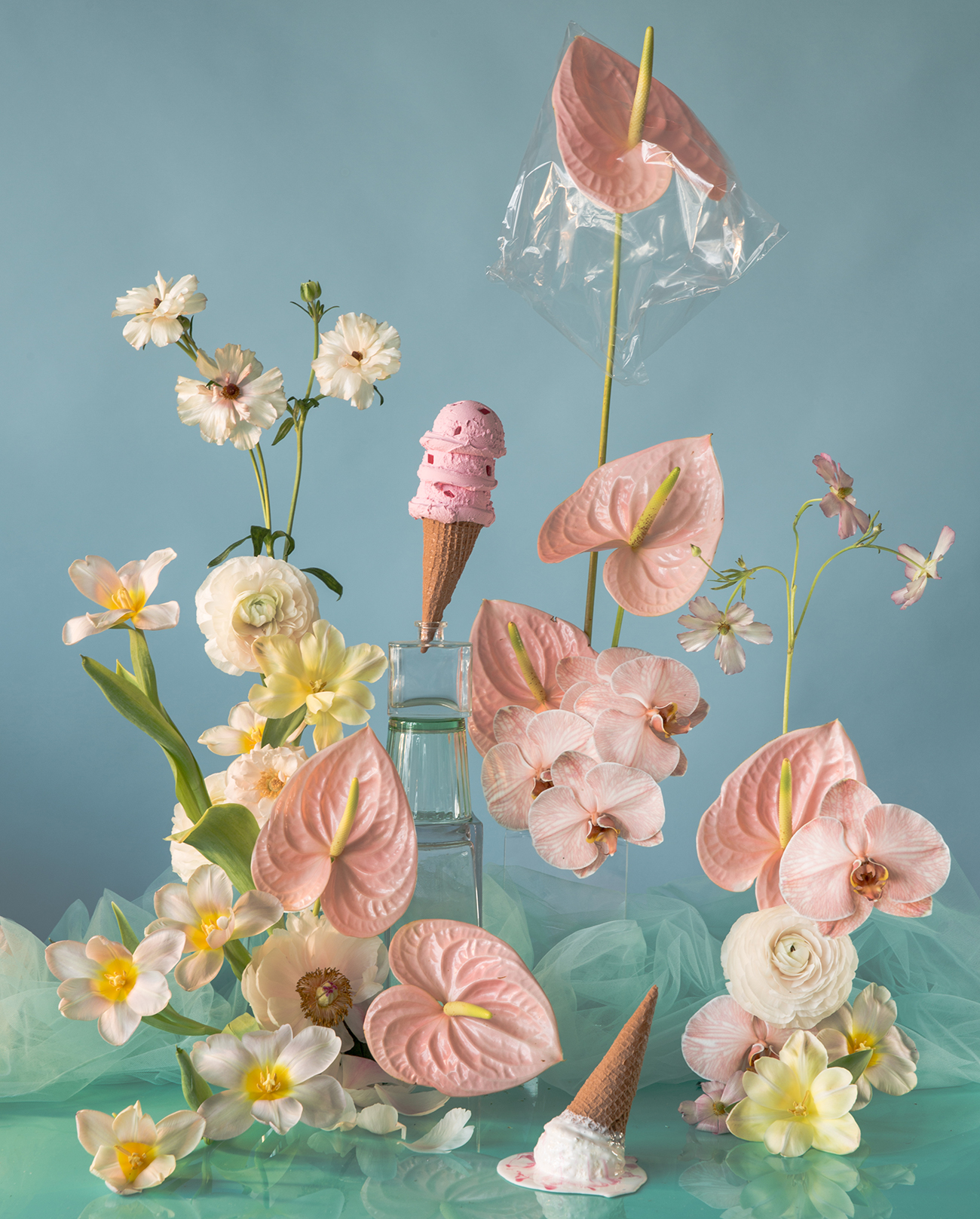 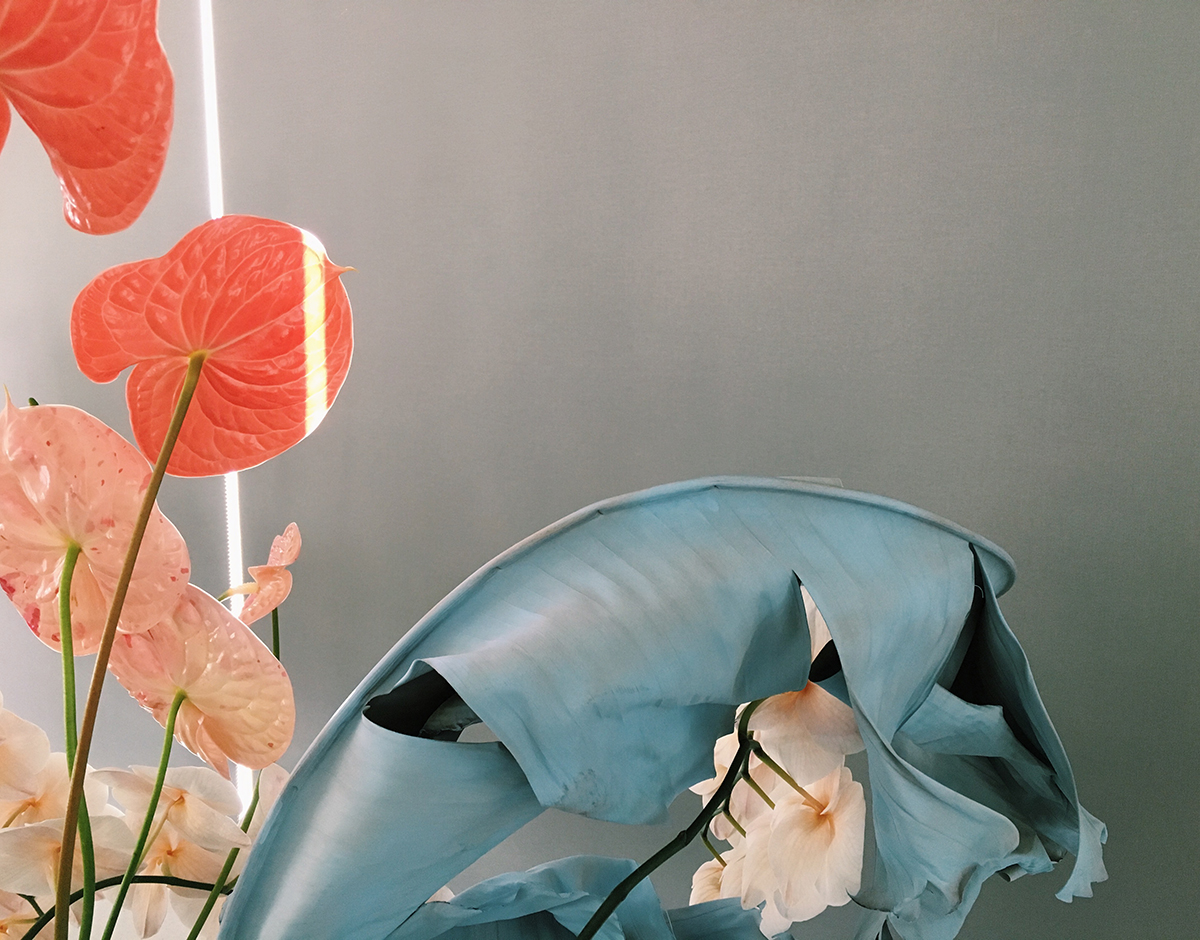 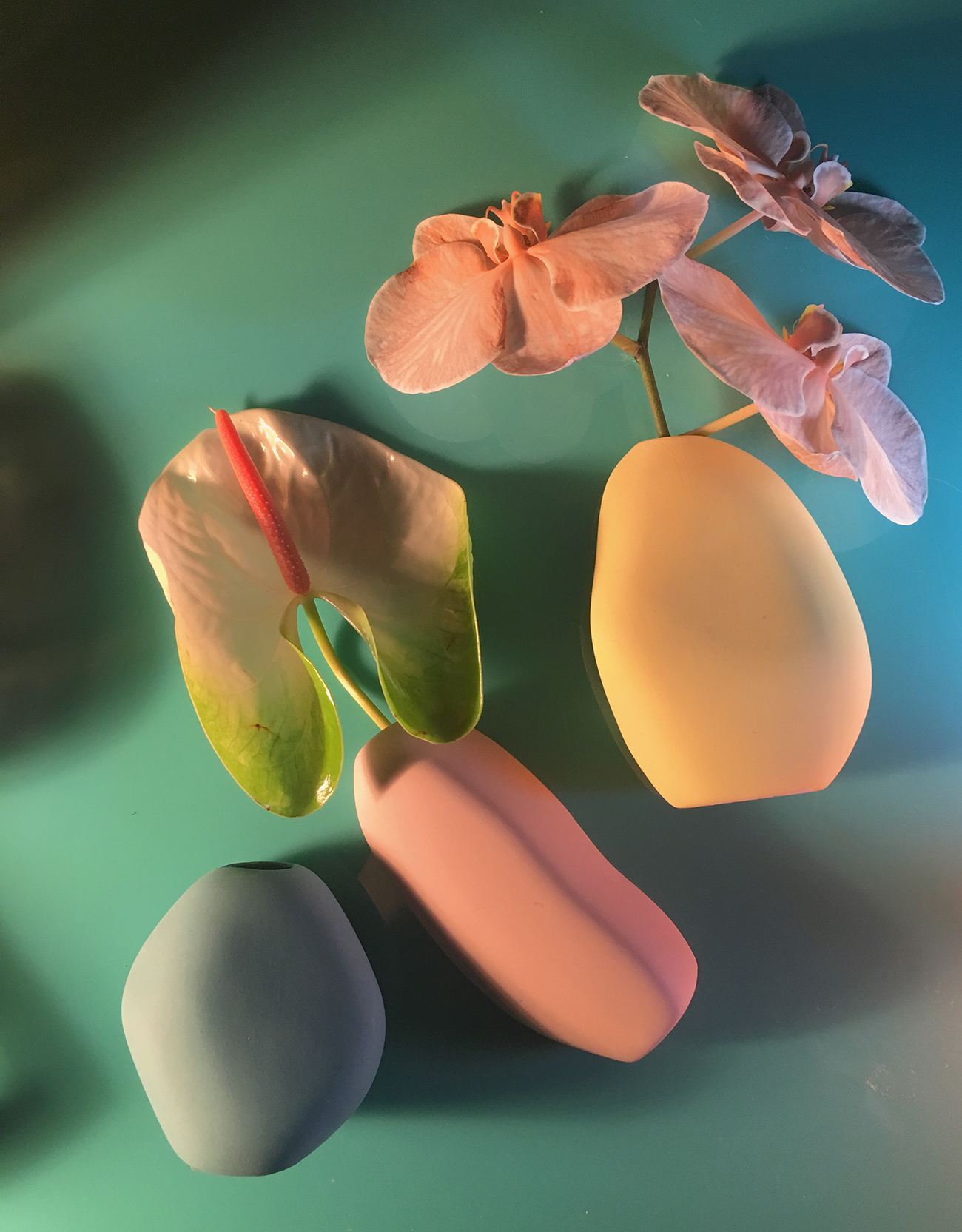 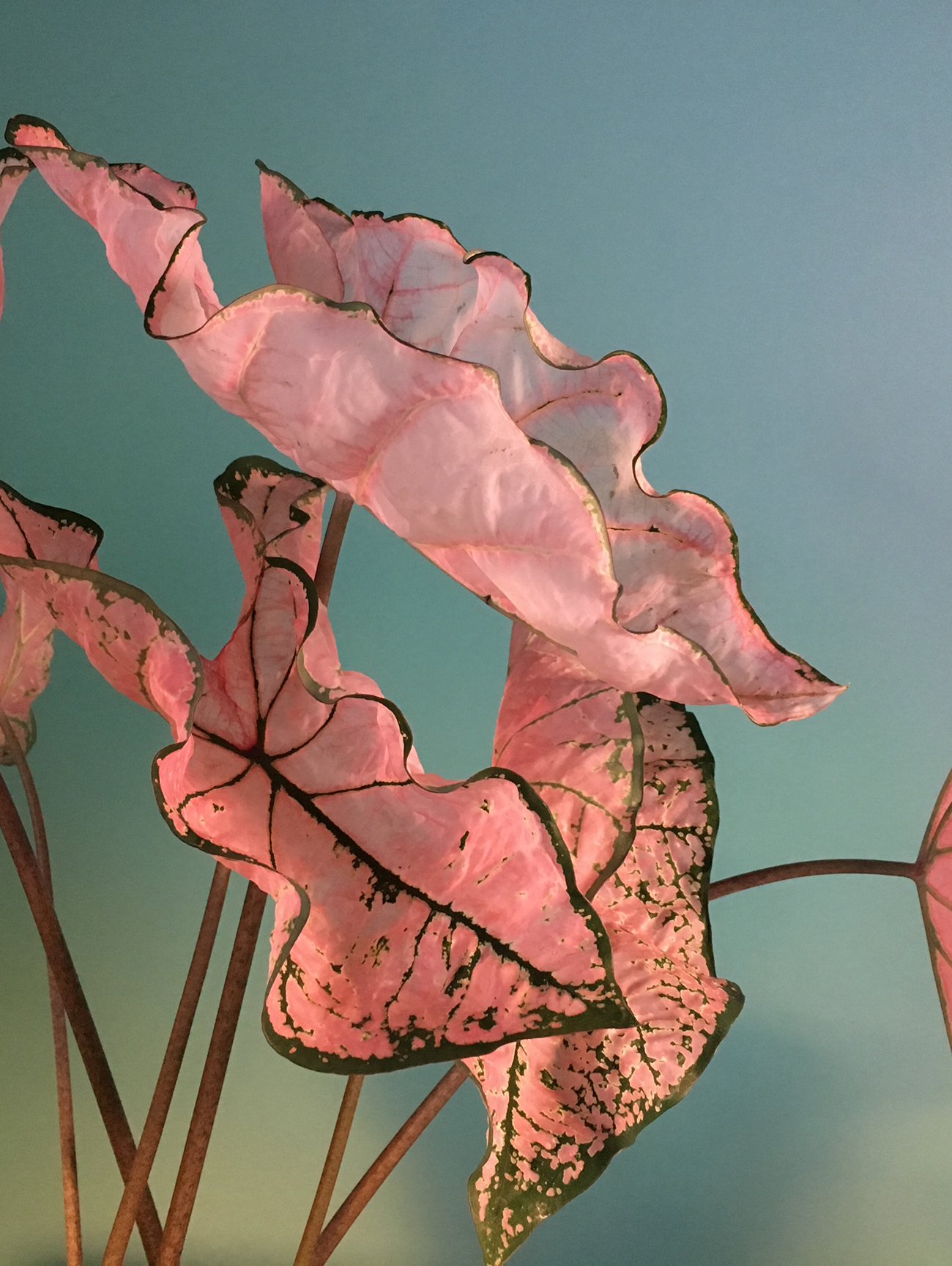 How easy or hard is it to switch gears in your brain between styling, photography, and florals?
Floral photography requires different styling than when I design for events. The camera sees flowers very differently than the eye. It sees negative space, shape, dimension, texture, and color differently than the actual flowers in front of you. It’s a whole other animal, and one that exists in the land of photographic make-believe. In my photography, I am both styling, shooting, and art directing, so for me, it’s one mechanism, all in the service of image-making.

Where did the name a.p. bio come from?
It’s meant to be a little cheeky/nerdy/sexual. And I wish I had a clear succinct explanation. It’s the idea that flowers are the sexual organs of the plant (biology), and we want to take floral design to a new, advanced level, but it’s also about advanced placement in a sexual way. Positions. Advanced placement biology. I’m a nerd, and though my images are feminine and floral, I was responding to the hyper-saccharine visual and linguistic context of wedding florals and how I couldn’t relate to that aesthetic. I see a lot of new designers now who have embraced an anti-fluff position to floral branding. The name is convoluted. Most people scratch their heads. To add another layer, it’s in small letters, no caps. 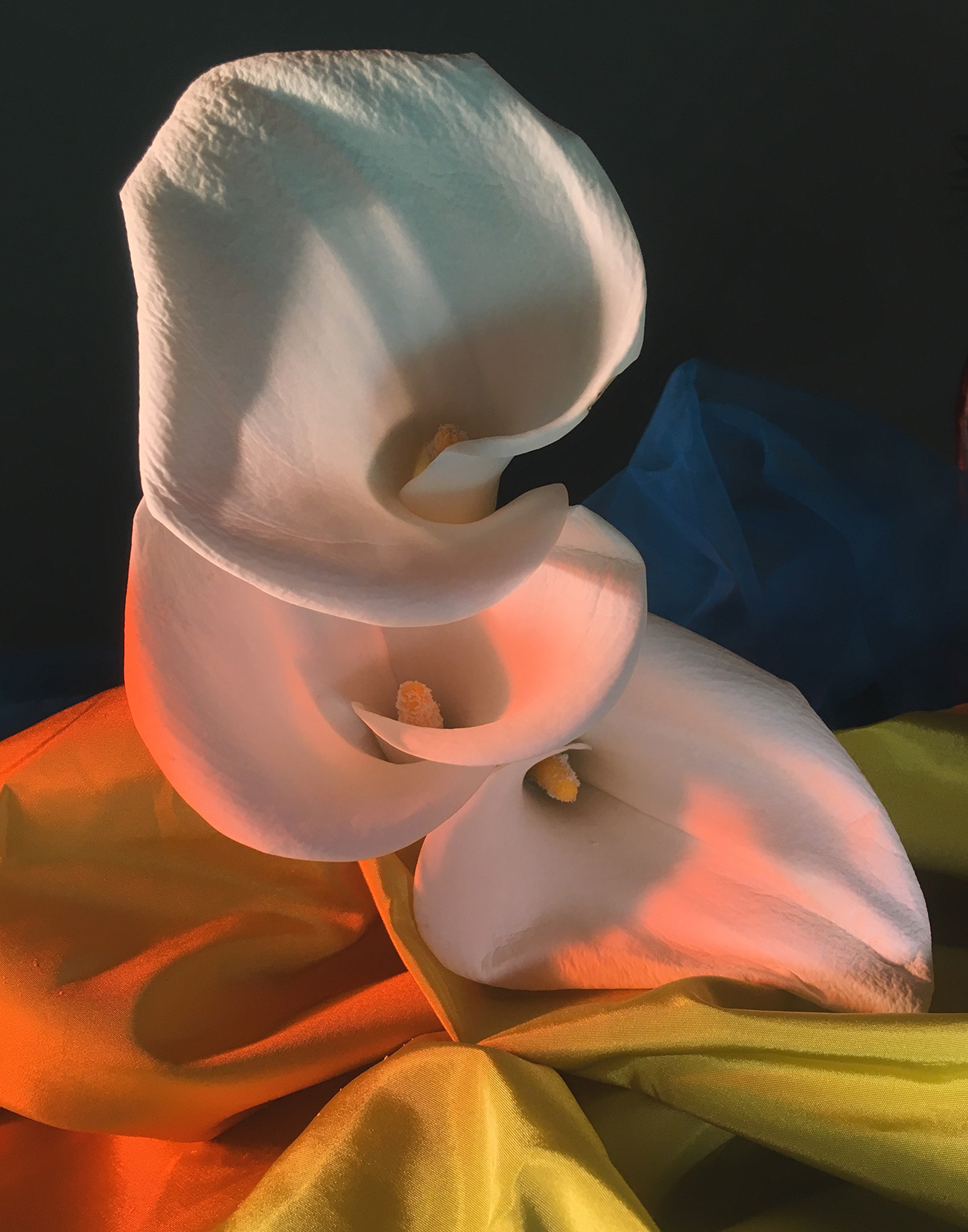 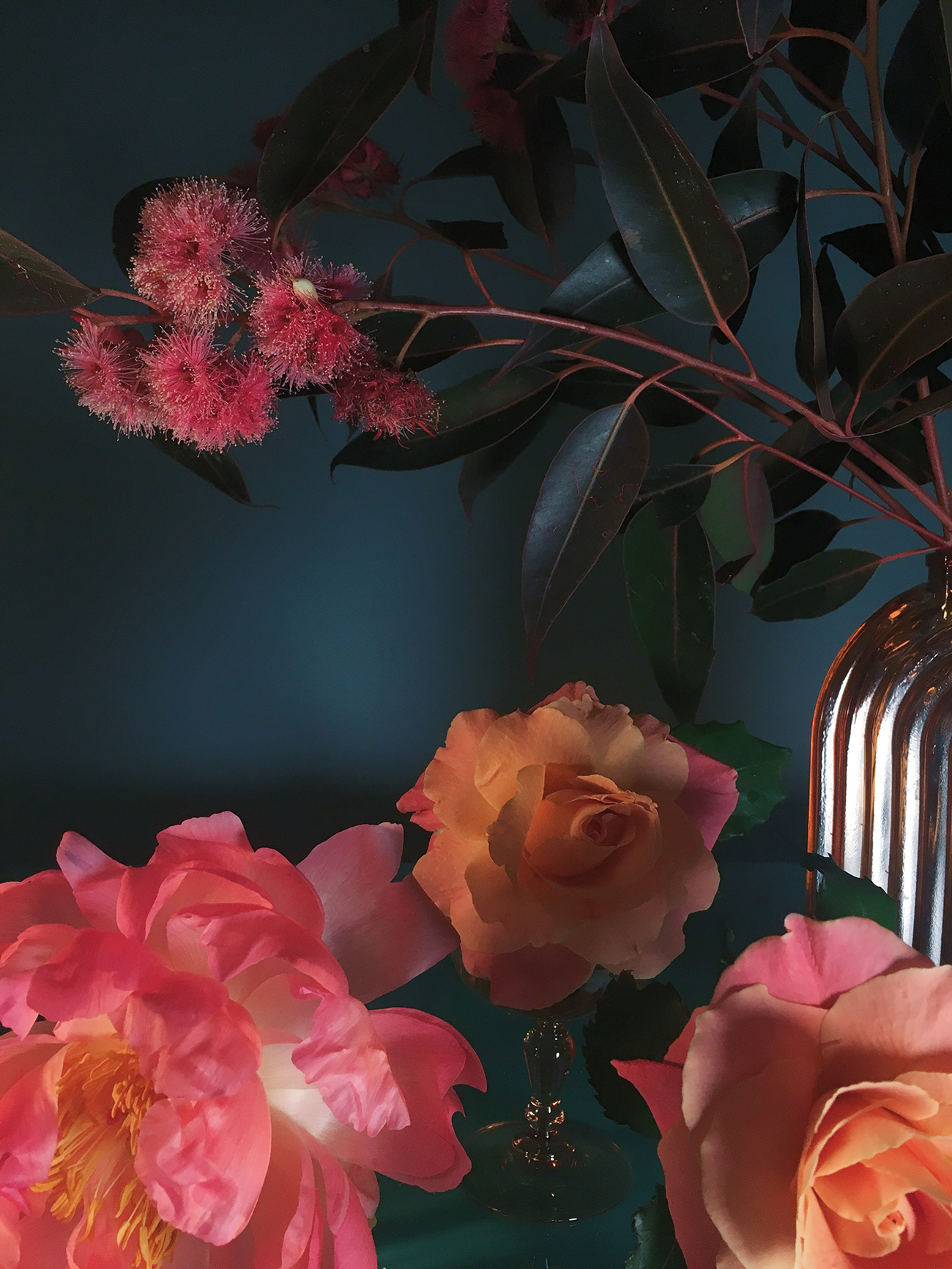 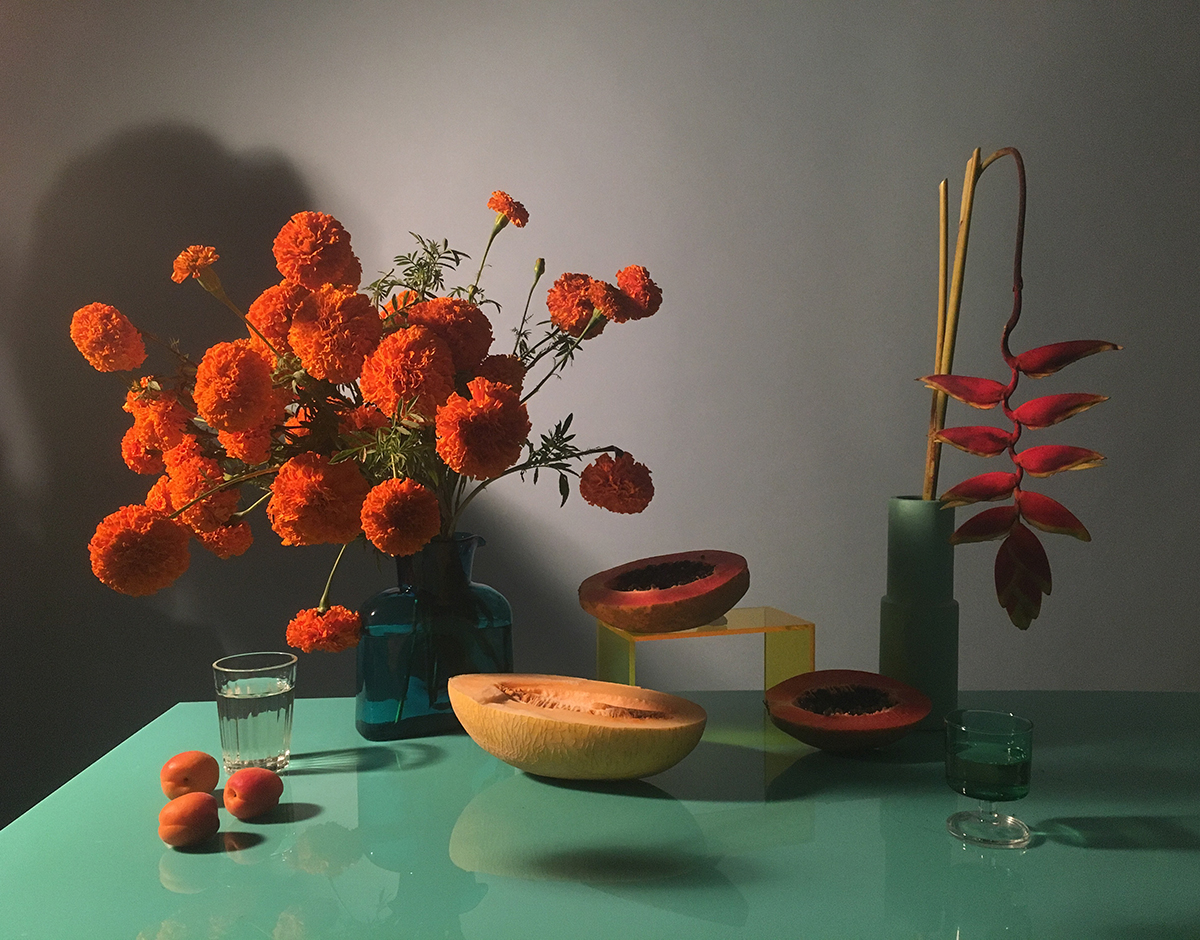 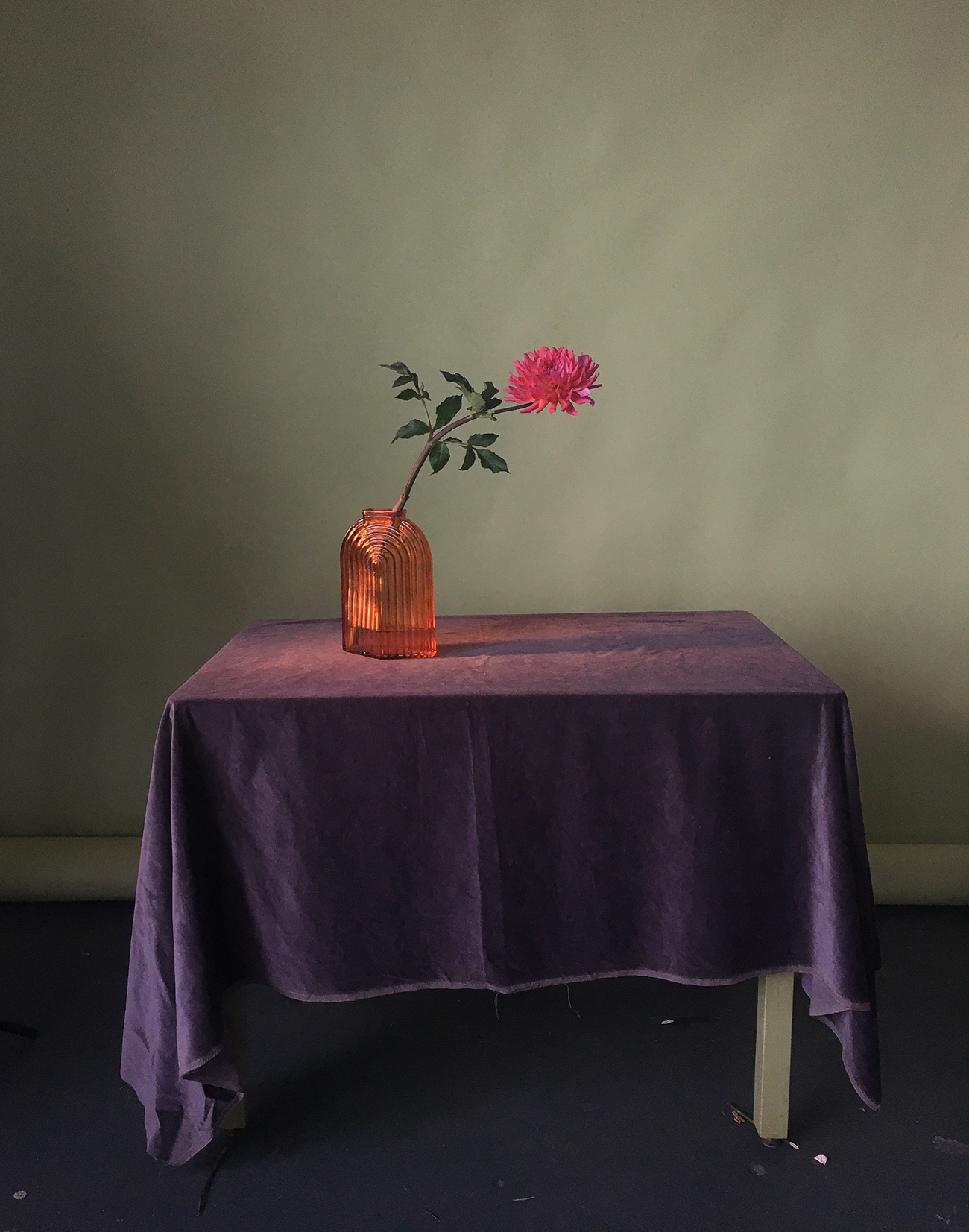 This will come as a shock to no one, but the Milan design scene can be a little insular. Some of the best things don’t make it past the border, or even beyond the chic artery of Via Solferino for that matter. And unless you speak a bit of Italian and are ordering the right magazines from abroad, it’s not always apparent who’s making waves in the city. Take, for example, up and coming Italian designer Elisa Ossino, an architect and stylist who, after more than a decade of working diligently within the Milan design scene, is finally charting international waters.
More 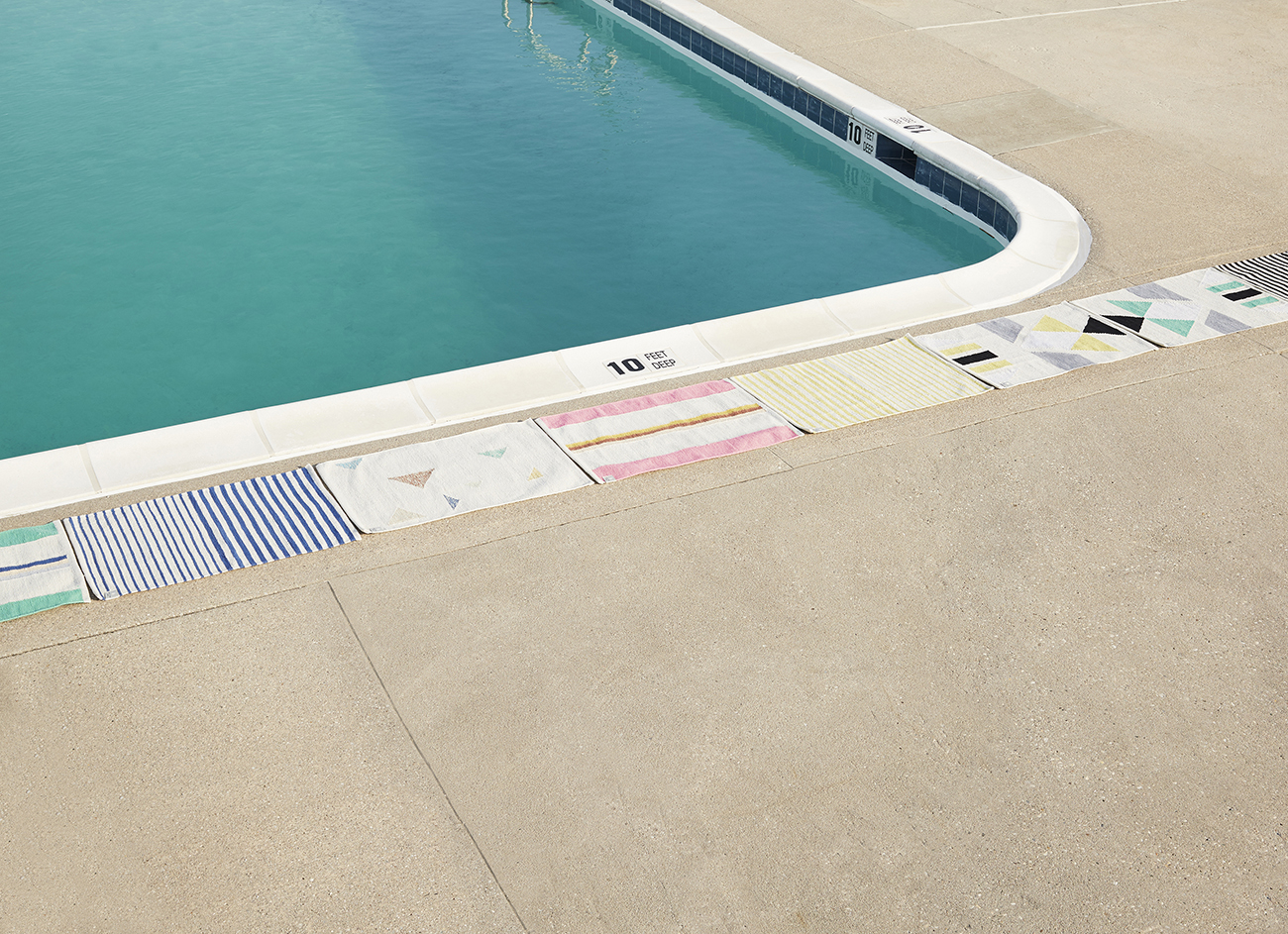 Call it what you will — wash room, water closet, commode, loo — the bathroom is nothing if not the unsung hero of many a home and apartment. It is a place of quiet refuge for space-deprived urbanites and, if Pinterest is any indication, an actual spa if you live outside New York City. No one knows this better than Lisa and Michael Fine, the founders of Quiet Town (she, a stylist, he, a photographer). They've taken their complementary skill sets and combined them to make a covetable line of bath essentials including shower curtains, rugs, and wall hooks that pleasingly upend convention while marrying (often geometric) form to function.
More 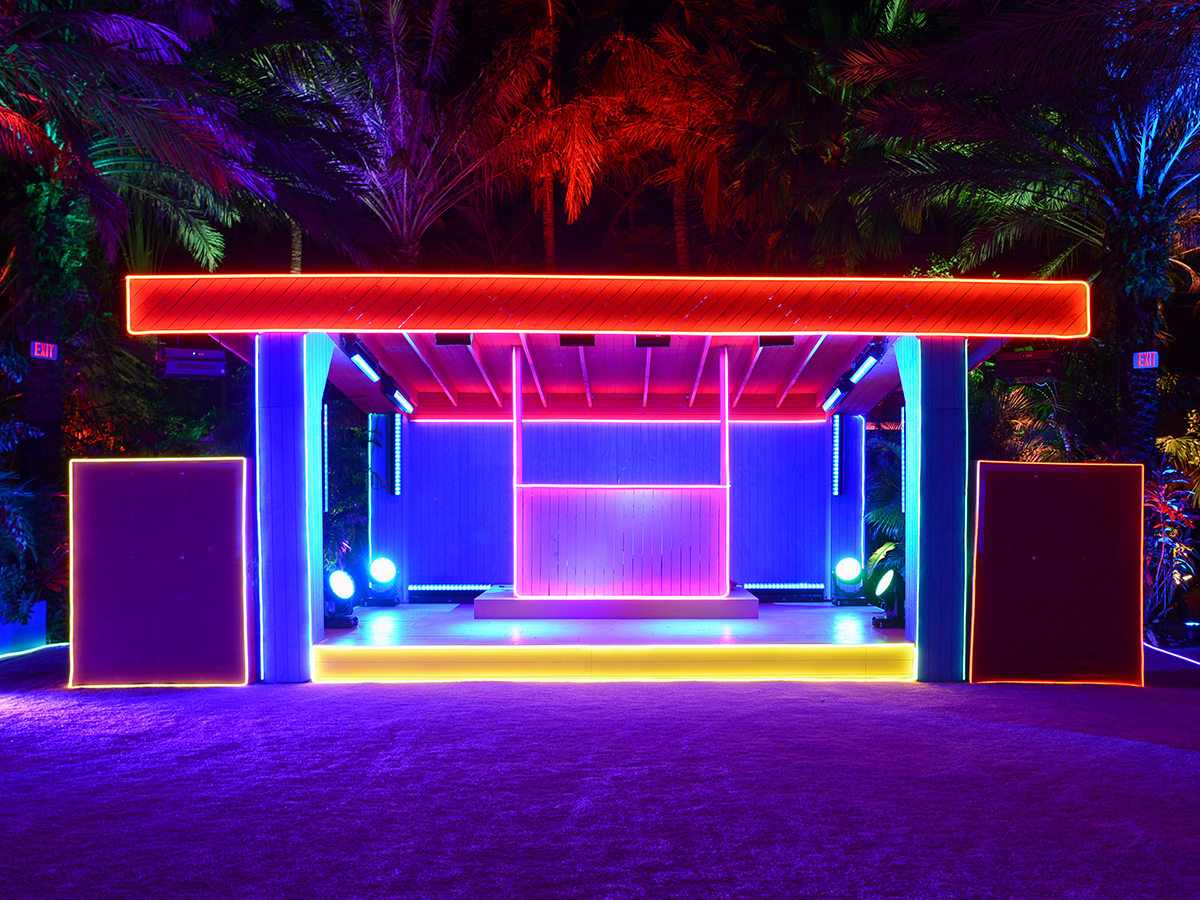