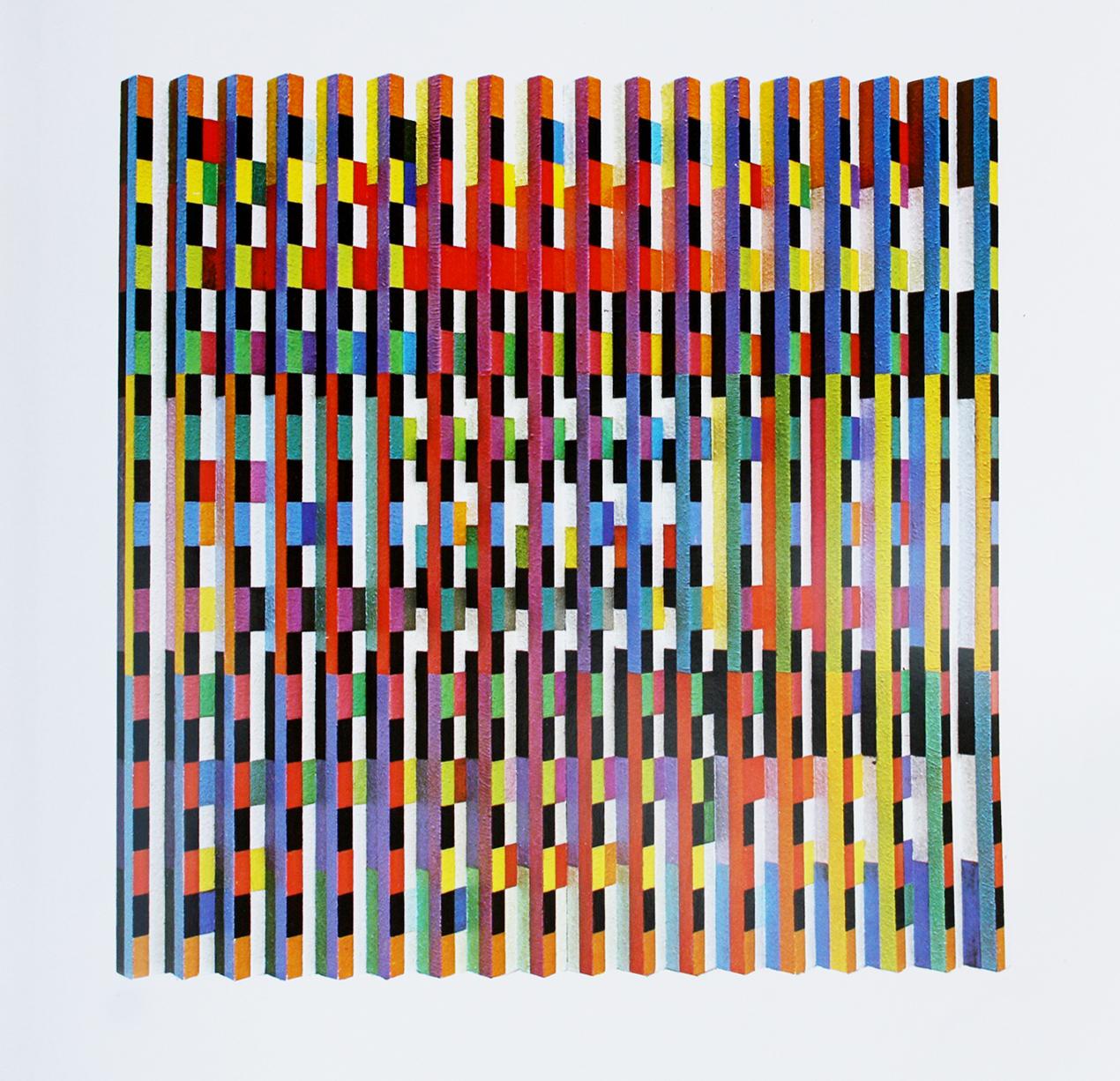 If there’s anyone who knows a little something about calibrating the perfect pattern, it’s Ellen Van Dusen. The D.C.-born fashion designer is Brooklyn’s reigning queen of prints, with nine seasons under her belt as Dusen Dusen, the line for which she creates flattering basics marked by colorful fruits, stripes, curves, dots, geometrics, and the like. So it made sense when we recently learned two things about Van Dusen: one, that she studied in college the psychology of design and the brain’s reaction to visual stimuli; and two, that she has a pretty incredible resource library to back that major up. On a recent visit to her Williamsburg studio, we perused her stacks, which included the massive, Todd Oldham–designed Alexander Girard

monograph from a few years back and some amazing old Esprit books that we already had planned to excerpt in the coming weeks. But it was this book on Yaacov Agam

, an Israeli sculptor and experimental artist known for his optical and kinetic work, that seemed to best represent Van Dusen’s joyful spirit. “As a textile designer, this is a huge source of inspiration,” Van Dusen admits. “I have named more than one print after Agam!” Here she tells the story of how she discovered Agam’s body of work and the long-lasting effect it has had on her own. 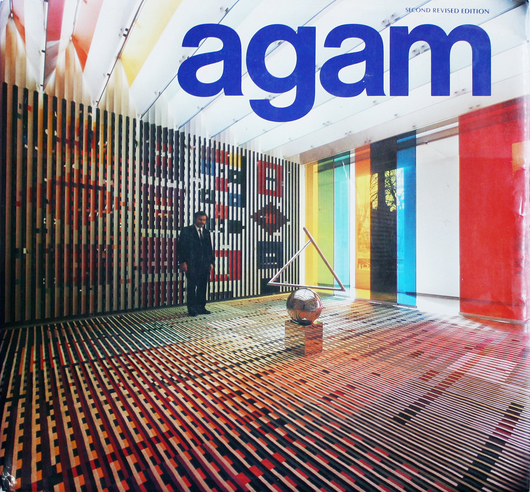 “I found out about Yaacov Agam during a trip to Paris for a trade show. He had an installation at the Centre Pompidou that’s on the cover of this book. It was so cool — a full room that looks different from every angle. In the cover photo, he is inside the room, but the lowly visitor could only approach from the outside, on the other side of the tinted Plexi panels. I would have loved to have seen it from inside!”

“He made pieces in the way a lenticular works. He would build a canvas out of aluminum to have a number of ridges, so that from different angles it looked completely different. He called these “Agamographs.” He was a kinetic artist, interested in art that appears as if it is moving even if it’s not (though sometimes it is!). In college, I studied the perception of color in art, so this stuff appeals to me in a very specific way. I have always been drawn to art that can trick the eye, and Agam is the master of this.”

“This specific book is a survey of his work through the mid-80s. What I really like is seeing his work evolve in a really clear progression. He has a specific vision and explores it in every possible medium (including bubbles!). I really appreciate his dedication to an idea and the diversity of approach.” 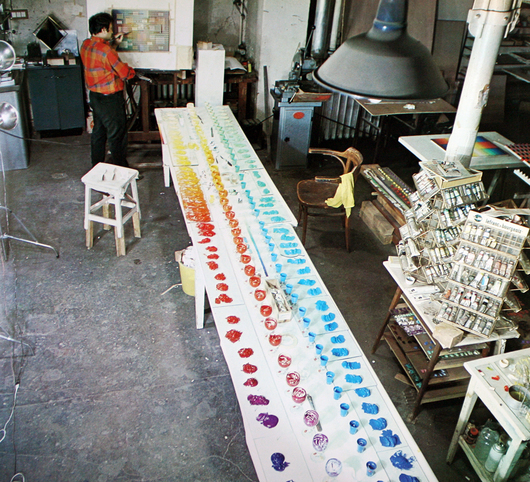 “I like this image because you can see how technical he is. He works with a palette of 180 colors. I am a color person and a numbers person, so this really appeals to me.” 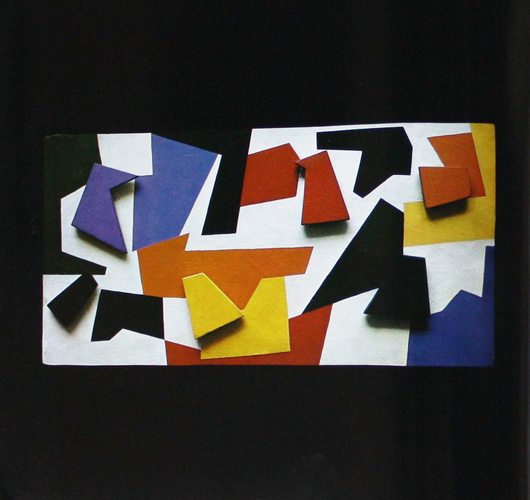 “This is some of Agam’s early work, when he was just starting to play with moveable parts within a image. The raised pieces can rotate. So if you’re like, ‘I don’t like this painting today,’ you can change it.” 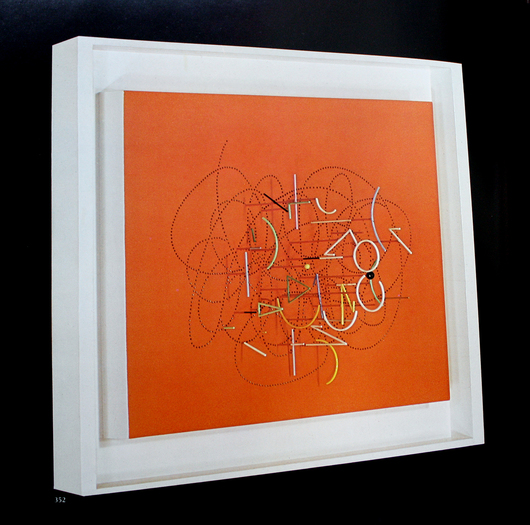 “This is similar to the last image, but slightly more next-level. Each of those pieces an be removed and placed into one of the holes in the orange background. I imagine this as a really good kids’ game, like Zolo but slightly older. I love the colors here, and I love the freedom he gives to whomever is handling it.” 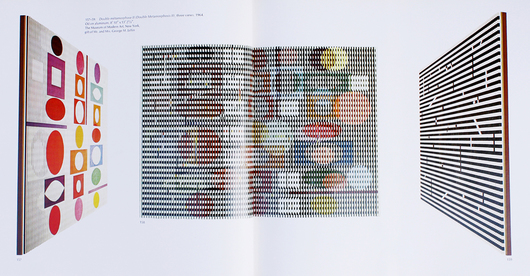 “Here is one of his early Agamographs. These three images are of a single piece. From straight on, it looks like the middle image. From the left it looks like the image on the left, and same for the right. What I love about these is that they create a successful image from every angle. I have a poster of his that he made for the 1988 Olympic Games in Seoul which is a straight-on view of a center image of one of these Agamographs. So good!” 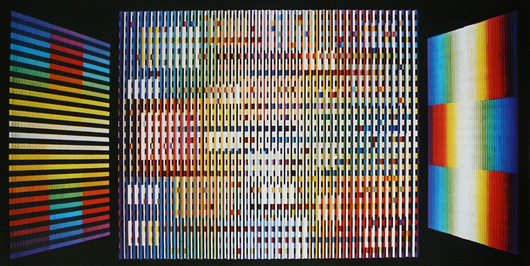 “This one is double-sided and it rotates.” 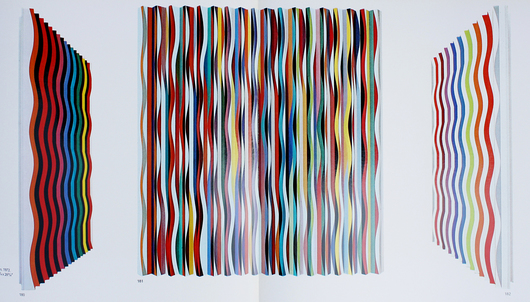 “This is similar to the previous one in that it uses a perfect balance of black and white. I am drawn to this one because I love wavy lines. This one reads to me as an homage to Sol Lewitt.” 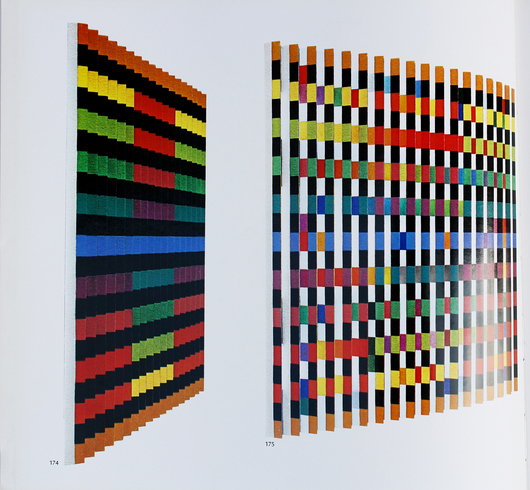 “This next set is one of his early five image Agamographs. I really wish I had the opportunity to see this in person!” 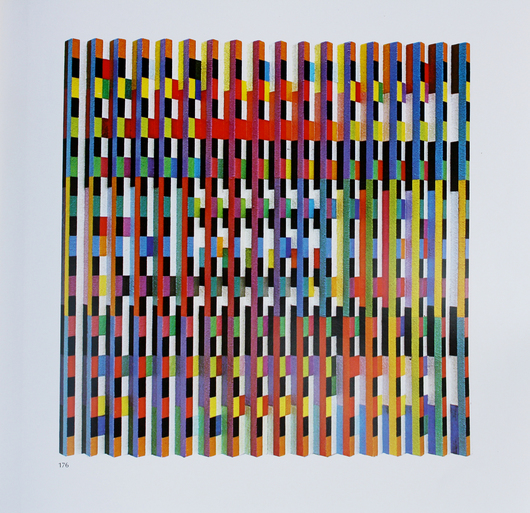 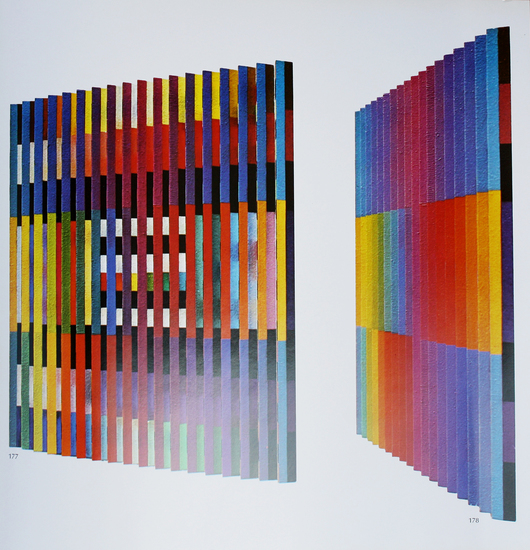 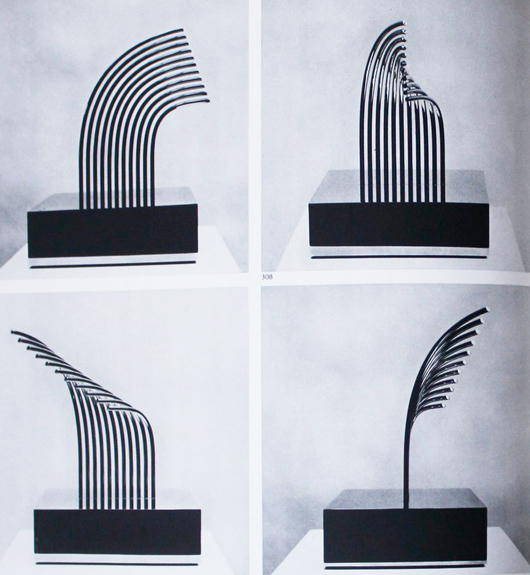 “Here is one of his sculptures. I think that even though he is designing something three dimensional, he is still looking at his sculptures as a flat images. This is four views of the same sculpture, which has a different personality at every angle.” 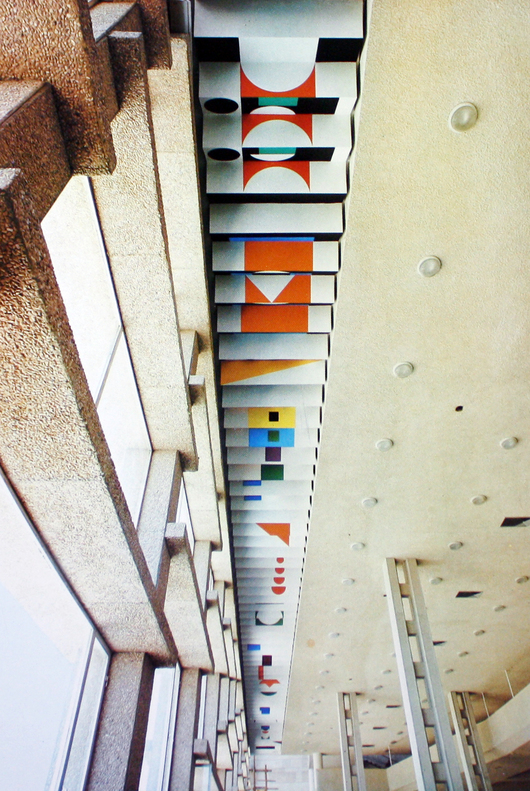 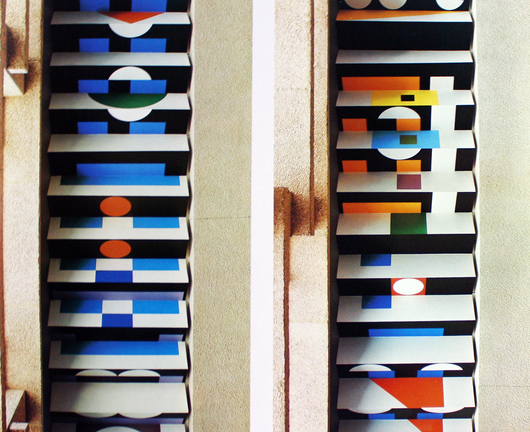 “This is an installation at the National Convention House in Jerusalem (He is Israeli living in Paris). This is just a two image design, but I love the way it looks like stairs on the ceiling. Here you can see the two views of the design. I think this could be great inspiration for someone that lives in a place with stairs. Wouldn’t it be nice to live in a place with stairs?” 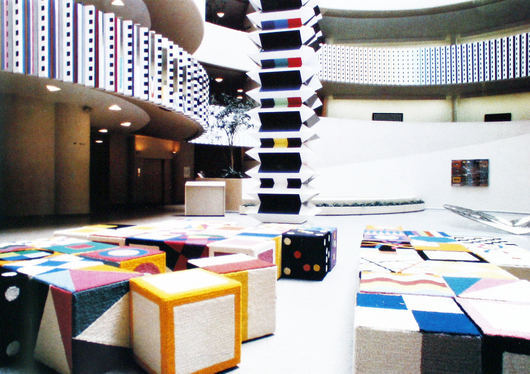 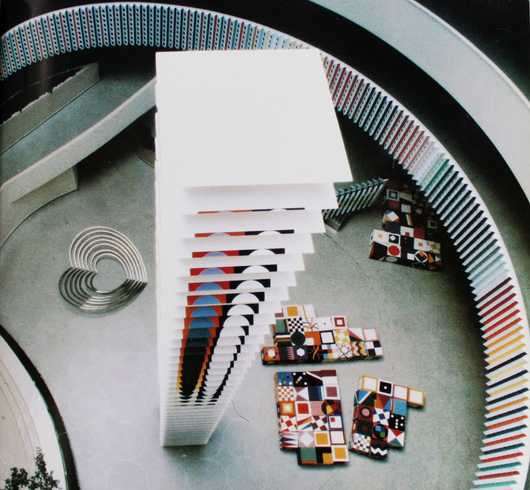 “These are from his show in 1980 at the Guggenheim. I would have loved to see this.” 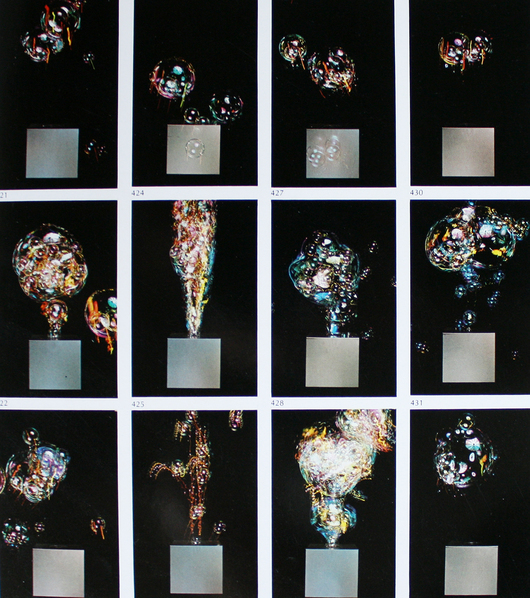 “In my mind, this was one of his weird, not-as-good, experimental phases. He waxes poetic about rejecting the fixed state of objects, and preferring to work with mediums that are temporary such as fire, water and bubbles. I don’t really buy it,  but I like this little set of images anyway. This piece is controlled by a remote, and the viewer can use it as they please.” 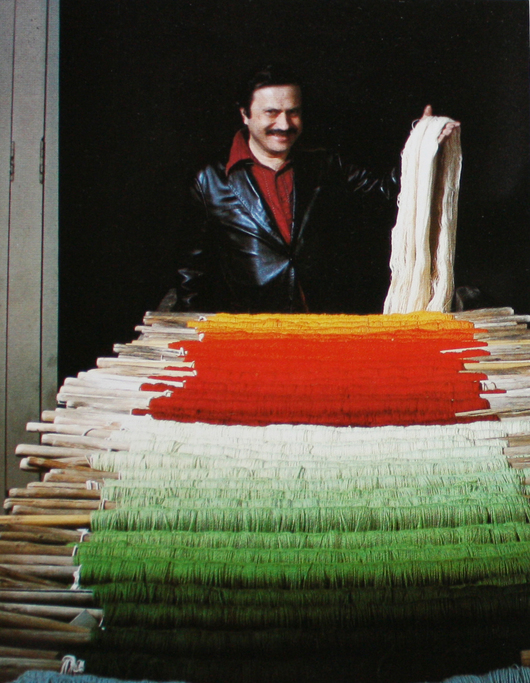 “The man himself! I love this photo of him.” 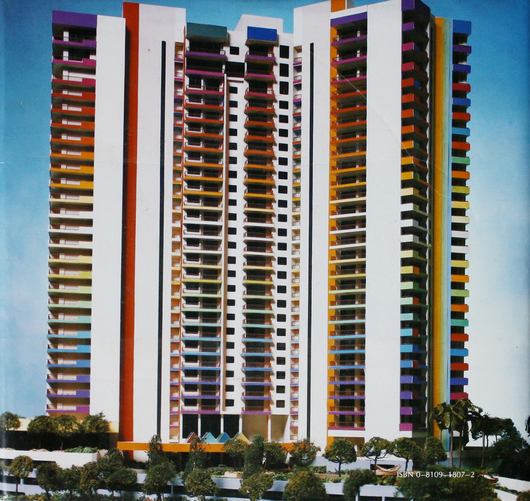 “This was his largest installation as of 1982 — don’t know if that is still the case. This is a luxury condo in Miami. It will be my first stop on my next trip down there!” 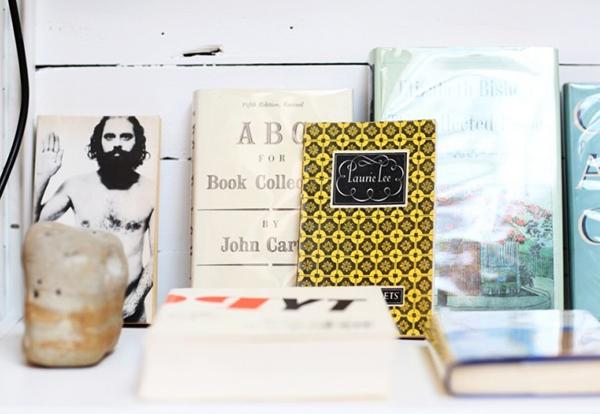 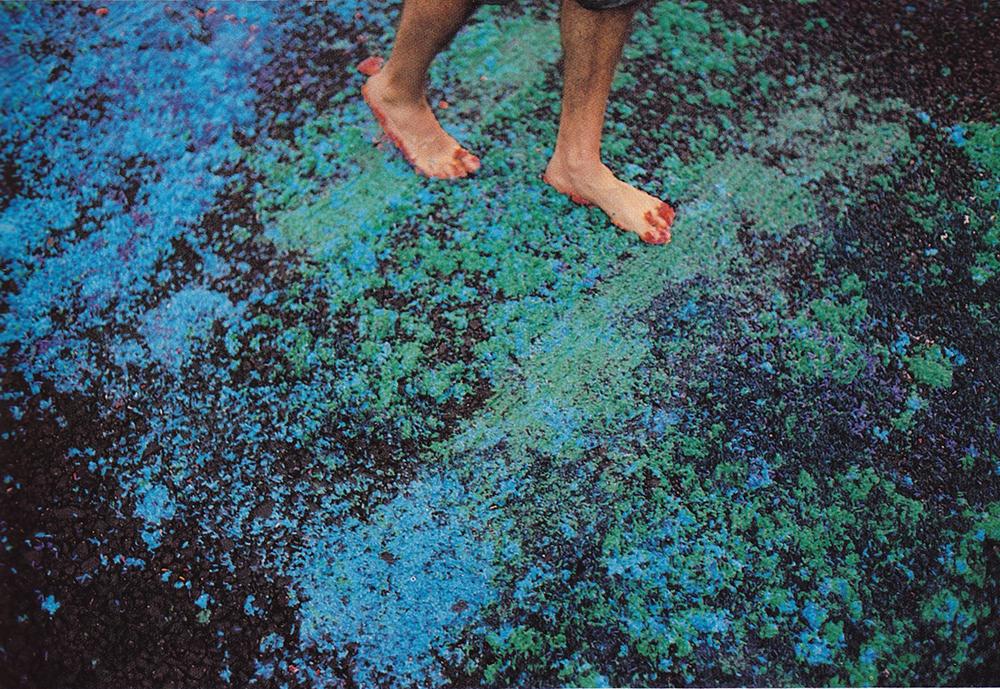 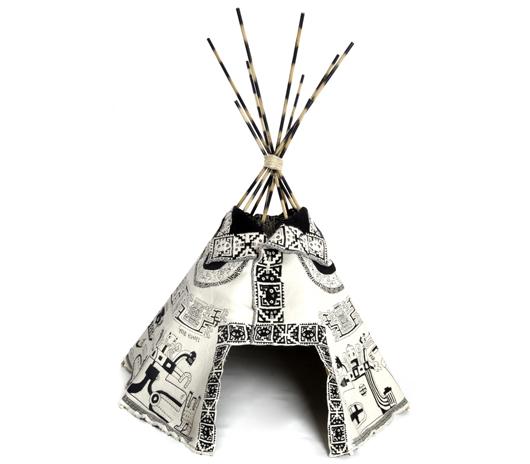