Hundreds of design lovers will find themselves in Provence this week on the occasion of the Villa Noailles Design Parade (on par with Dutch Design Week as our favorite design event we’ve never actually been to). But one of the coolest things can actually be found a scenic, 90-minute drive from Hyères in the small town of Grasse. There, in a 300-year-old farmhouse owned by design patron Silvia Fiorucci-Roman, is the 5Rooms project at Moulin Des Ribes, for which five design studios were each asked to create a bedroom with ensuite bathroom, where every detail was inspired by the colors, crafts, and traditions of the surrounding region.

Conceived in collaboration with Villa Noailles, the five participating studios include Joachim Jirou-Najou, Paul Brissonnet + Alexandre Benjamin Navet, Superpoly, Studio Quetzal, and Zanellato/Bortotto, all of whom are past winners of the Design Parade festival in Hyères. Going forward, 5Rooms will be part of an artists’ residency program, but until then it’s simply a place to revel in the fact that one region could give rise to so many vastly different interior schemes, from Superpoly’s ’80s brushstroke freakout to Studio Quetzal’s warm brick minimalism. Read on for a glimpse inside each studio’s process.

“‘We sought equilibrium between form and color, by uniting abstract painting with clean-lined furniture,’ the designers say. Inspiration is multiple and manifest: the interiors seen in paintings by Henri Matisse, the intensity of Cy Twombly, the minimalism of Gerrit Rietveld and Donald Judd. Conceptually, this room is one big polychromic painting in which guests are the only figurative subjects. All the pieces were custom-built at the Superpoly atelier in Hyères, where Dufour and Grulier were assisted by specialized artisans. The tiles were modeled one by one from blocks of wet clay. The typical imperfections of handicraft, along with the effects of glazing by hand, make each tile unique. This turns the bathroom surfaces into a ceramic fresco, functional and fantastic at the same time, whose pattern is deliberately recomposed in an irregular fashion.” 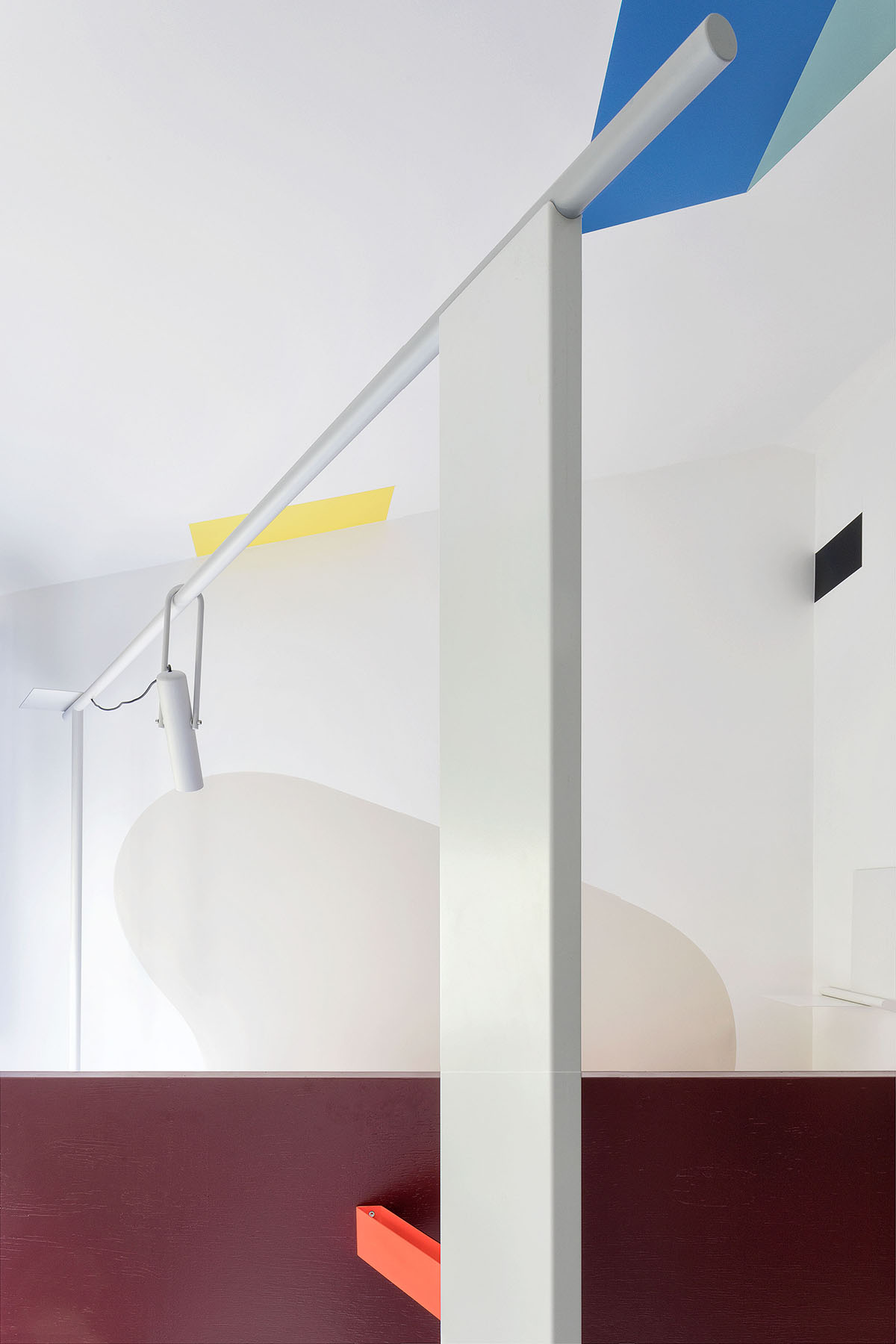 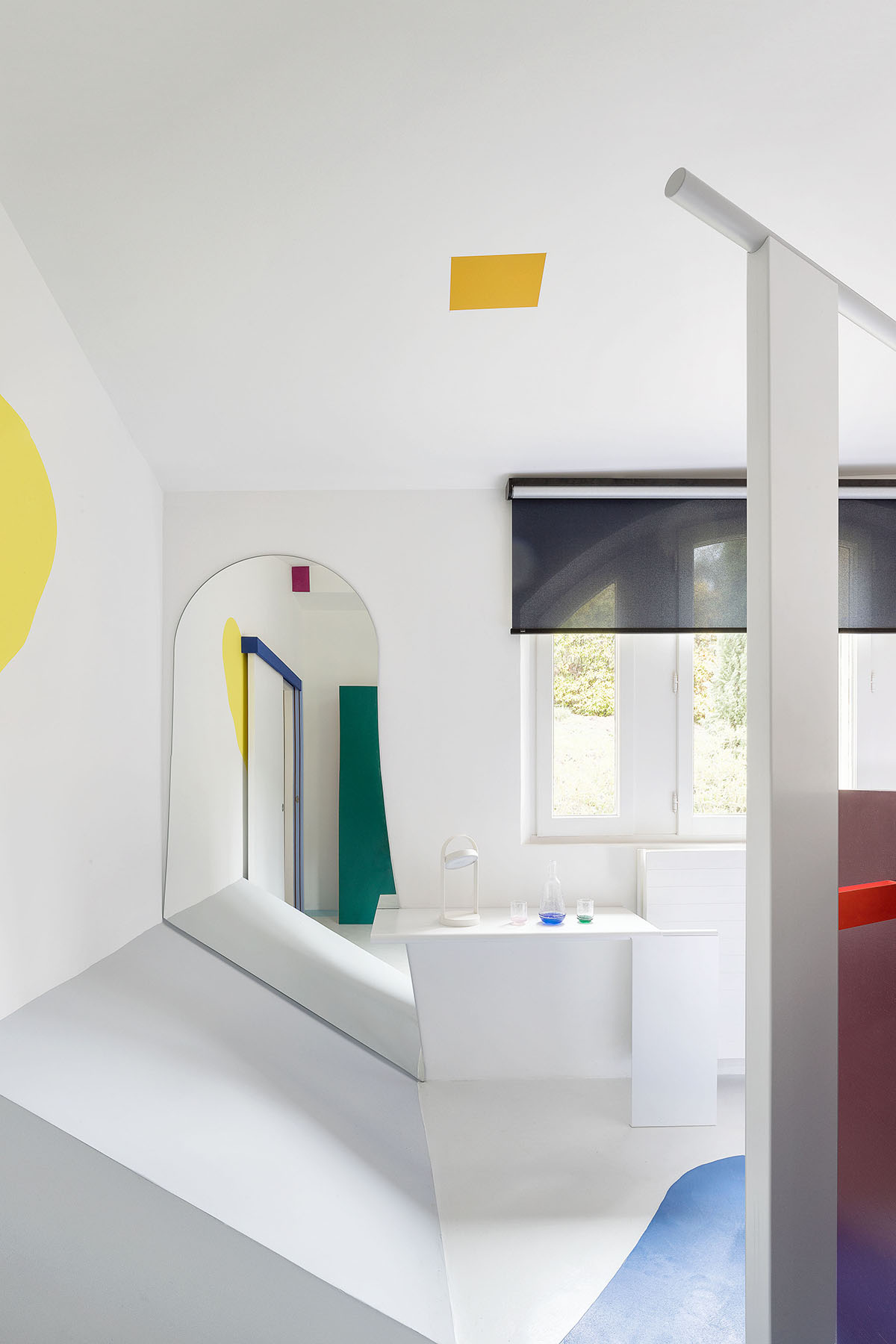 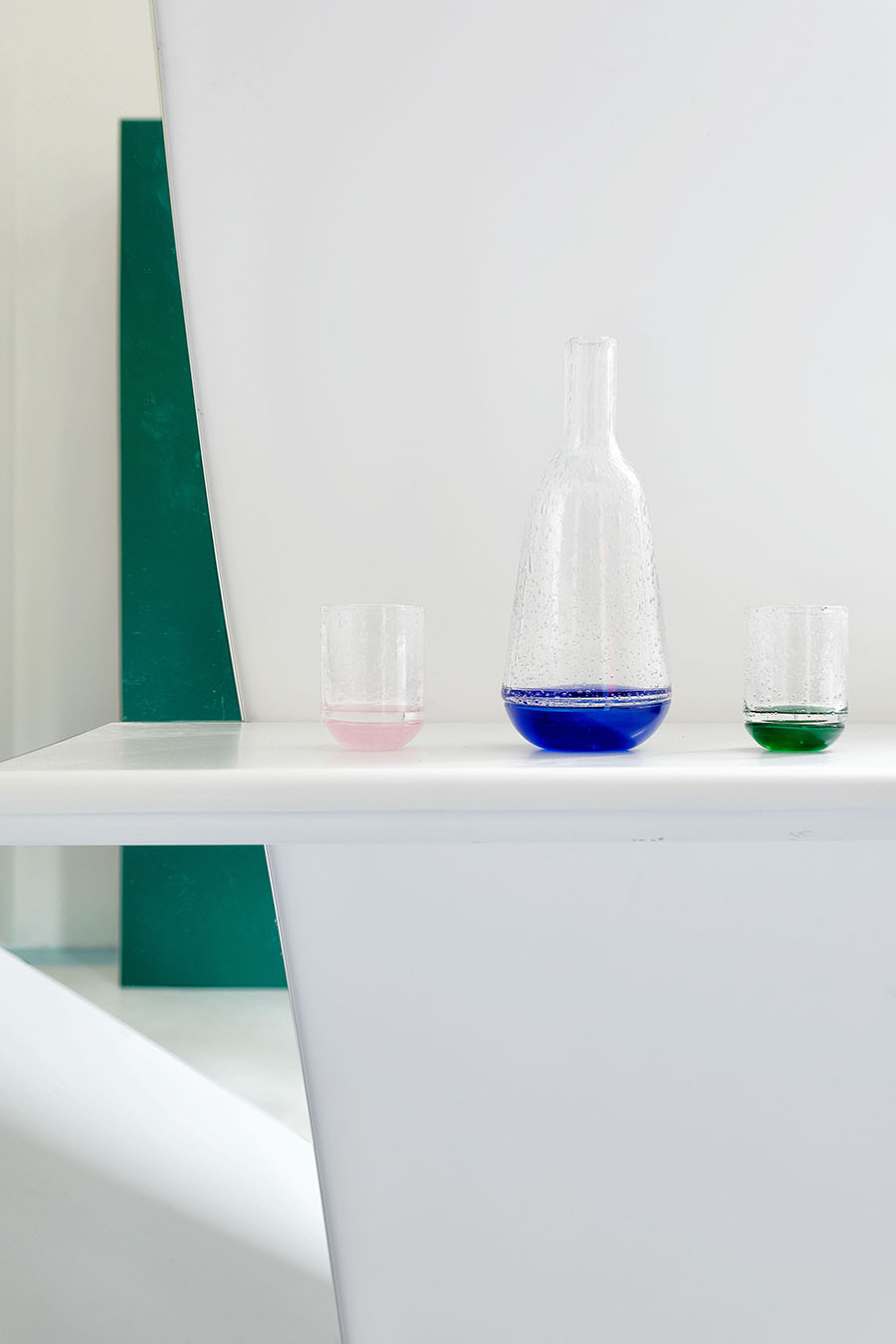 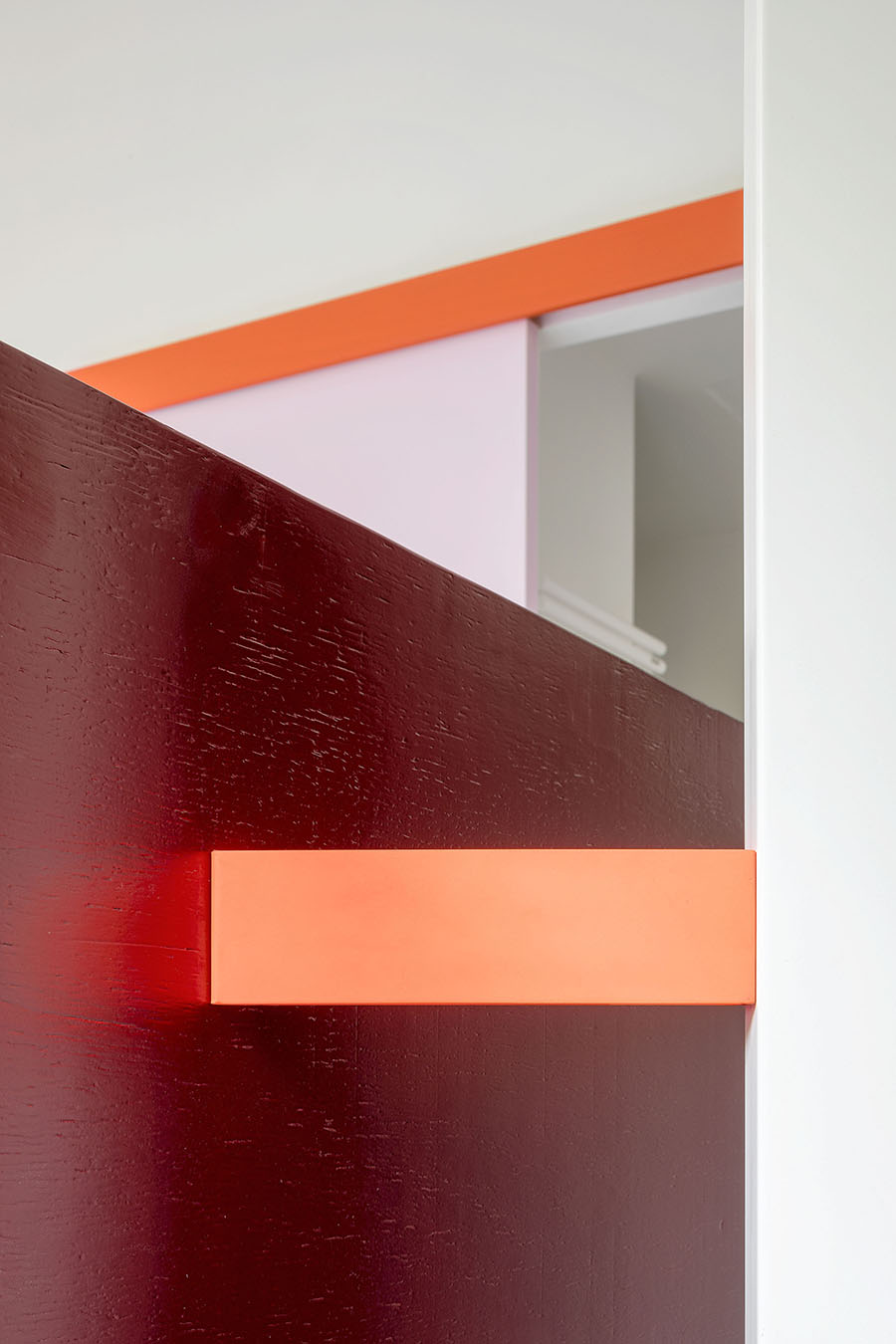 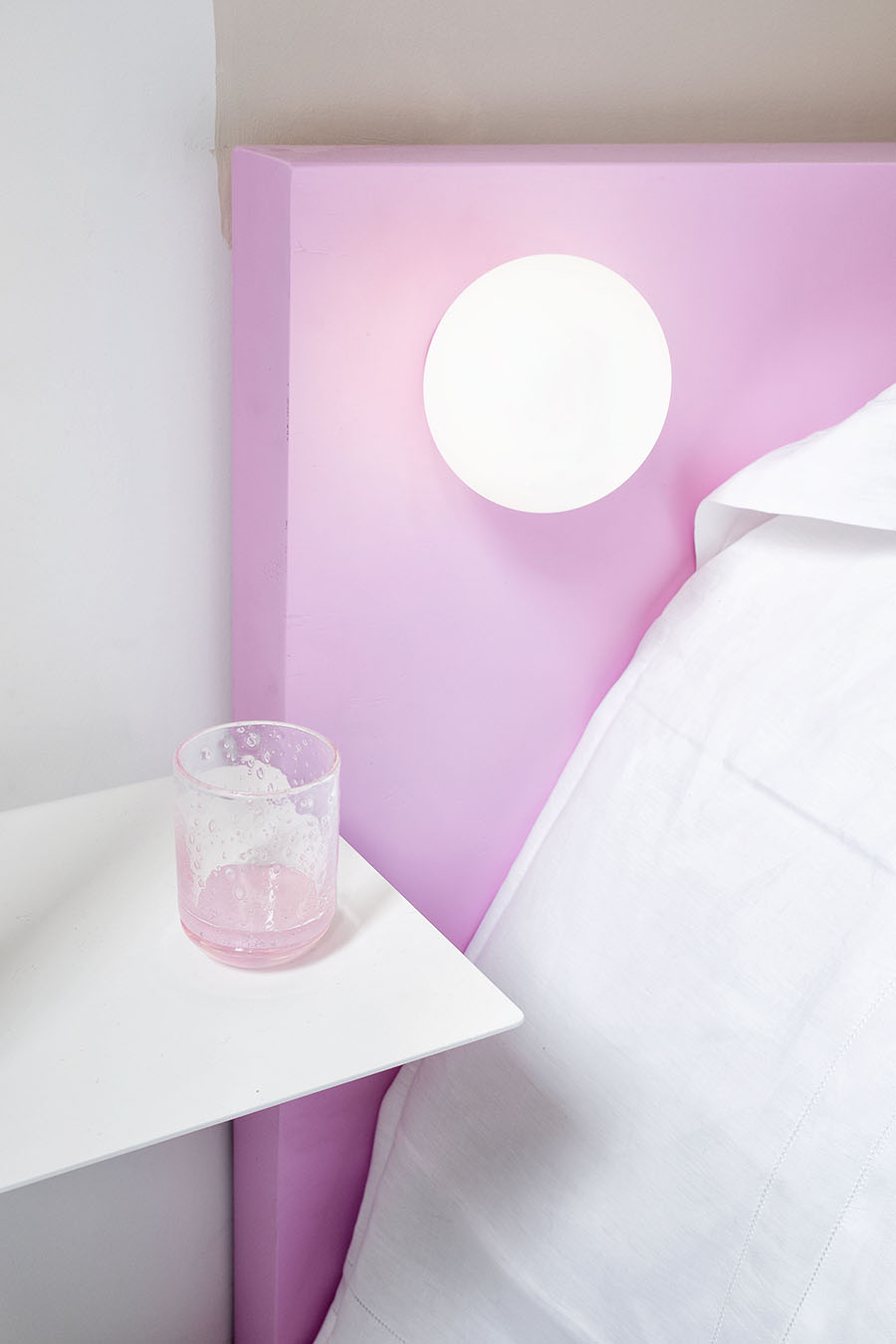 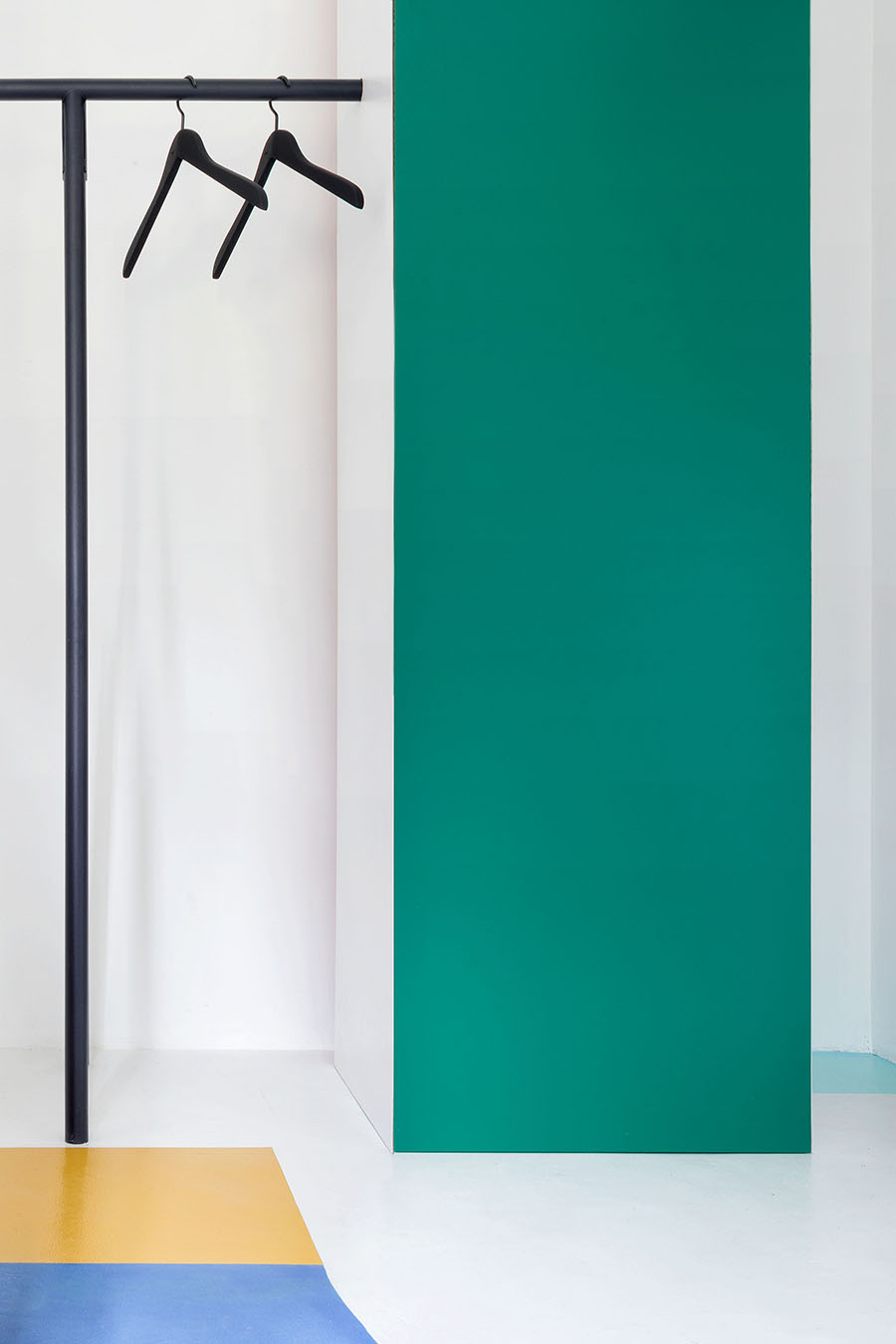 “Around Moulin des Ribes, the gentle Mediterranean landscape is lush with trees; there is a garden, a pool, a vegetable patch, and hills. The project reflects this succession of layers and various elements, diversifying the room in different spaces. Just as conceived in the original abstract drawing, the splashes of color, the simple lines, and the variation of sizes are juxtaposed with naturalness, or sometimes layered, to match the visual sensation of depth found in the landscape. Joachim designed colored shapes on the floor and walls to delimit the areas and mark their function: study, rest, play, relax, etcetera.” 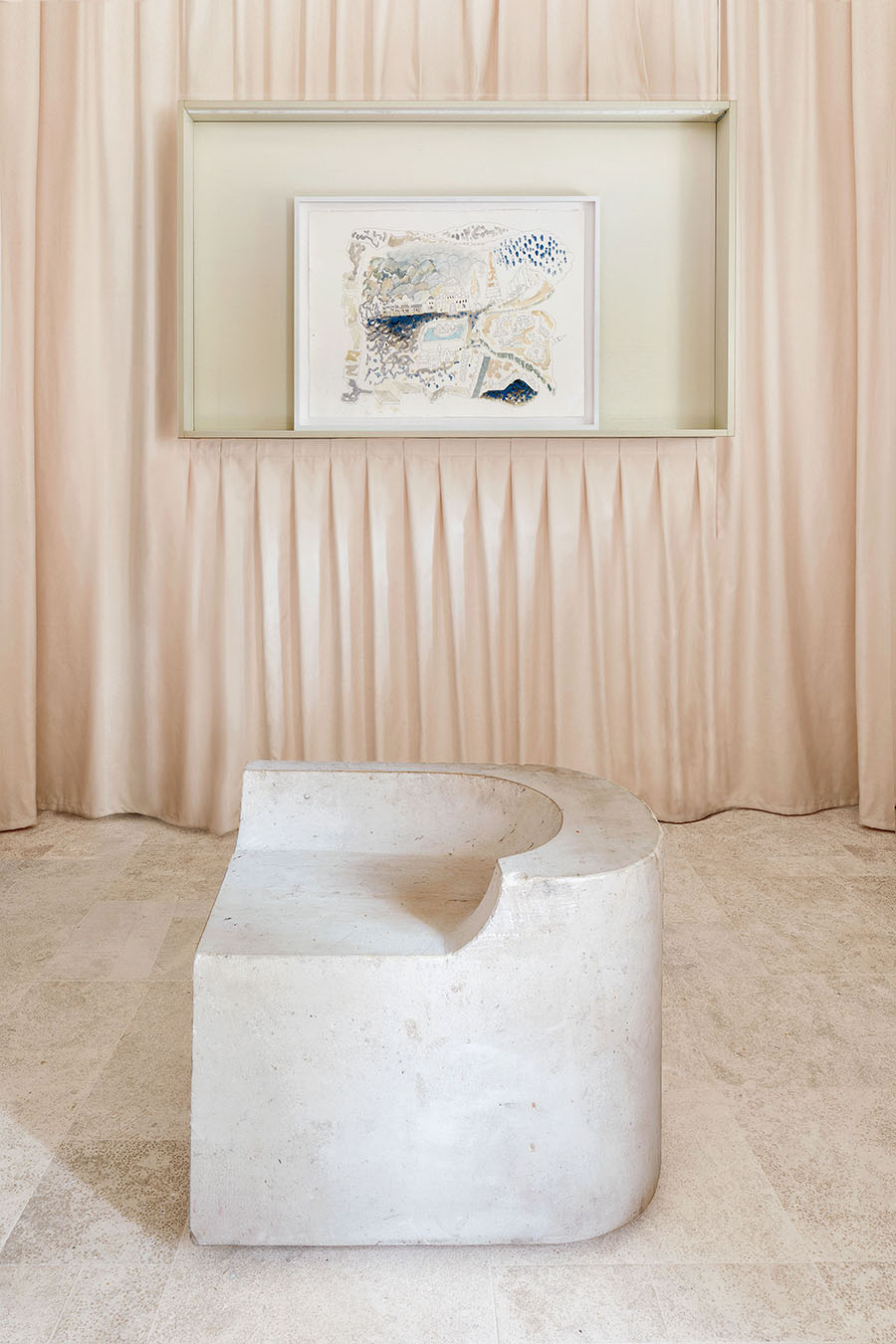 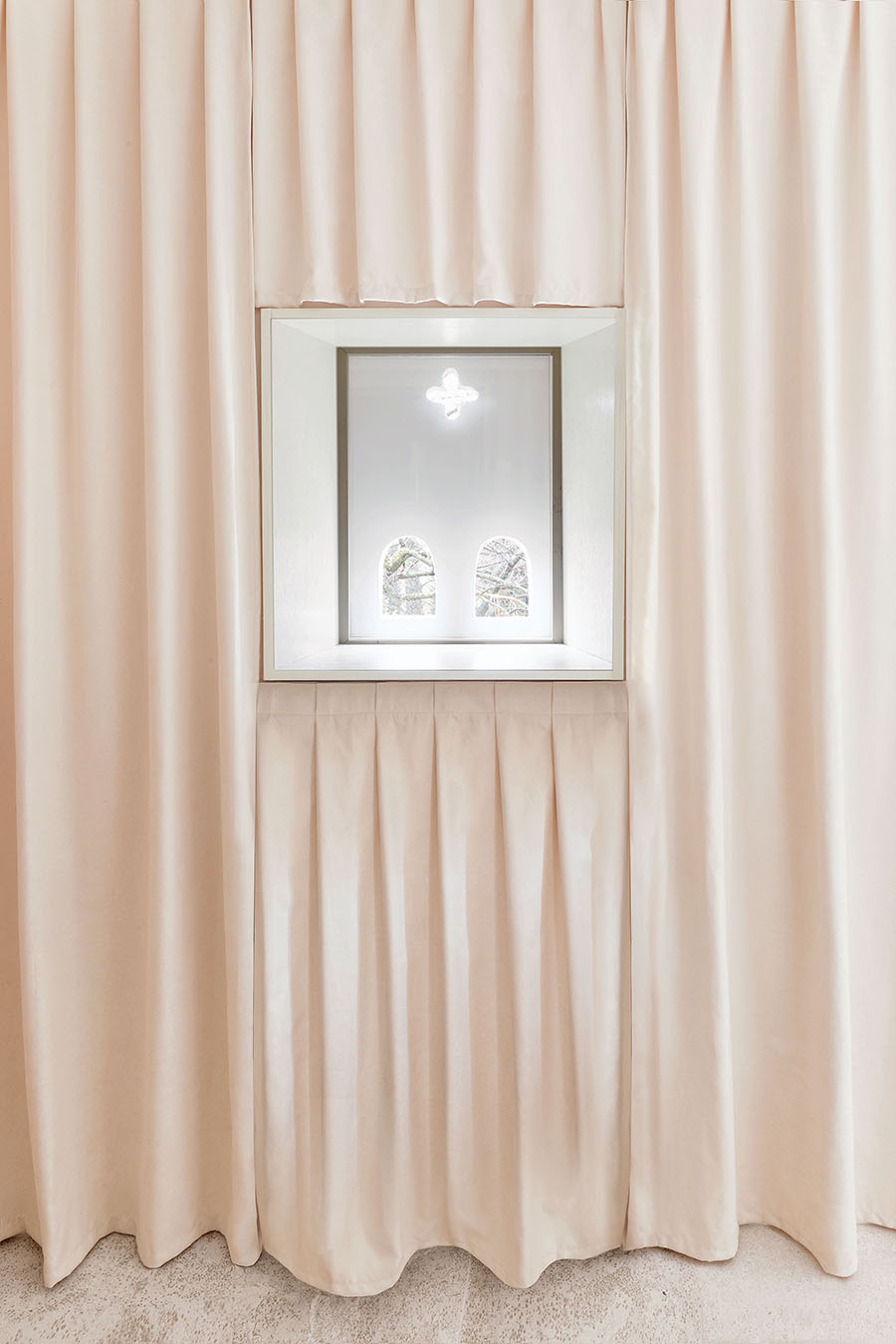 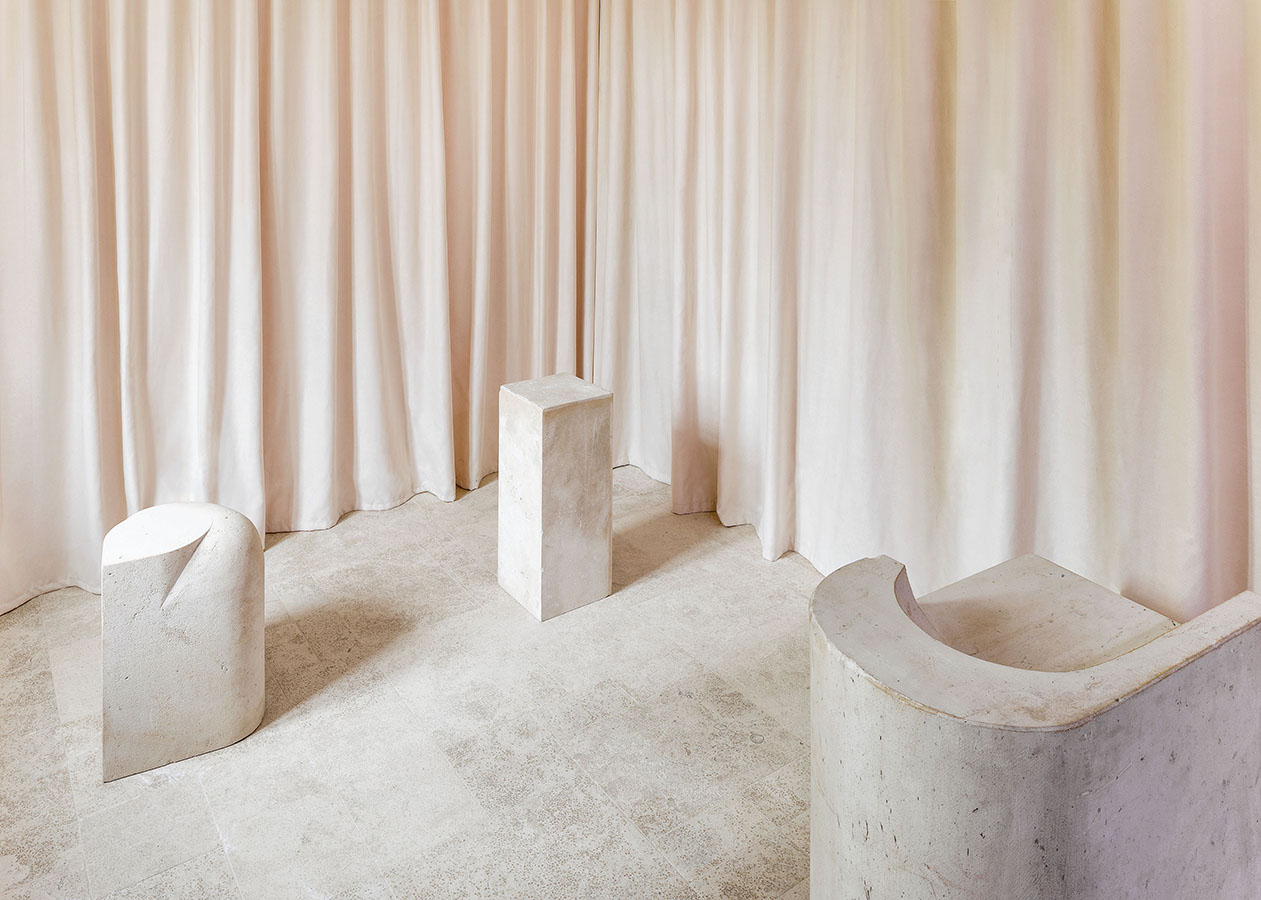 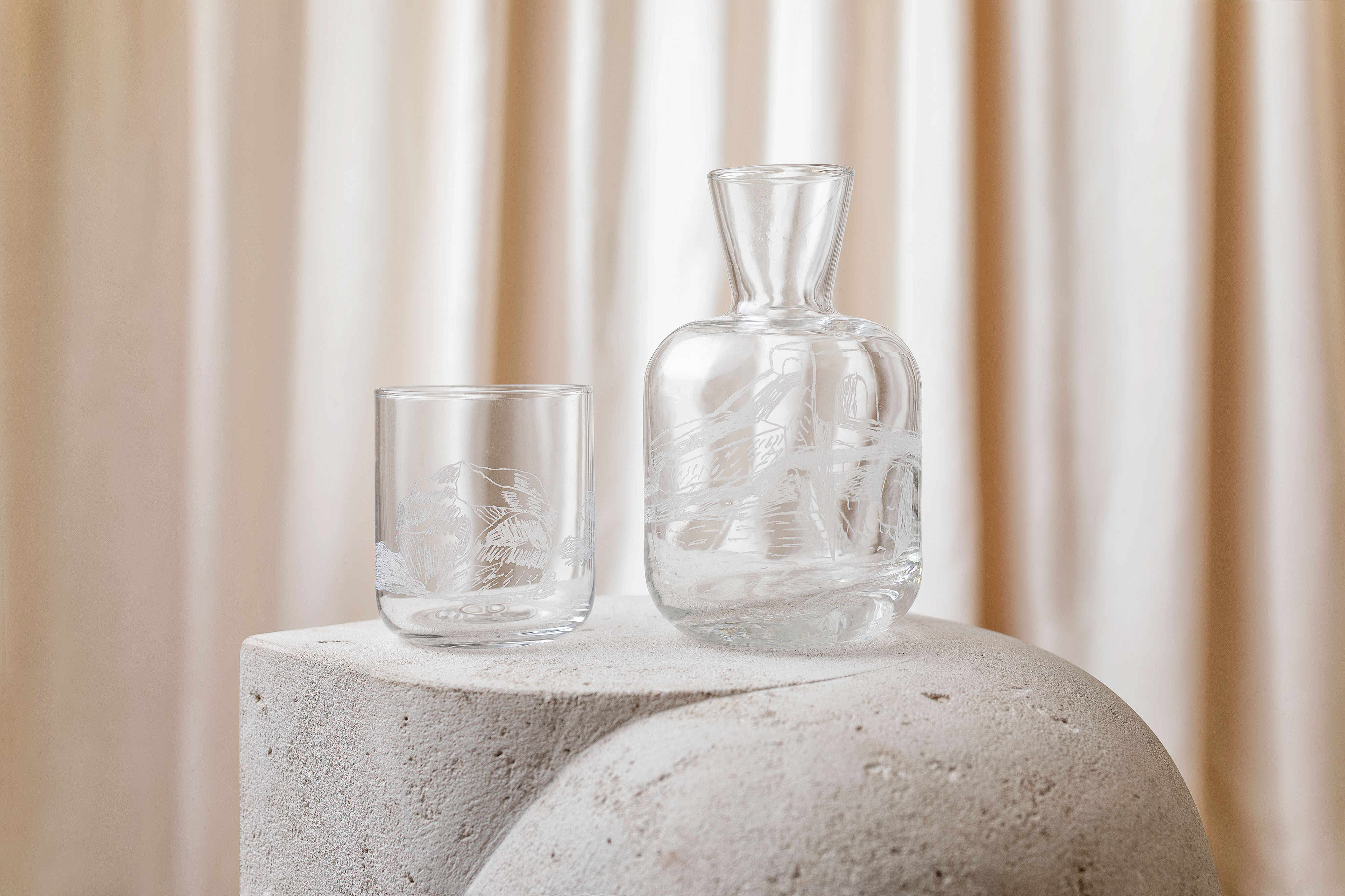 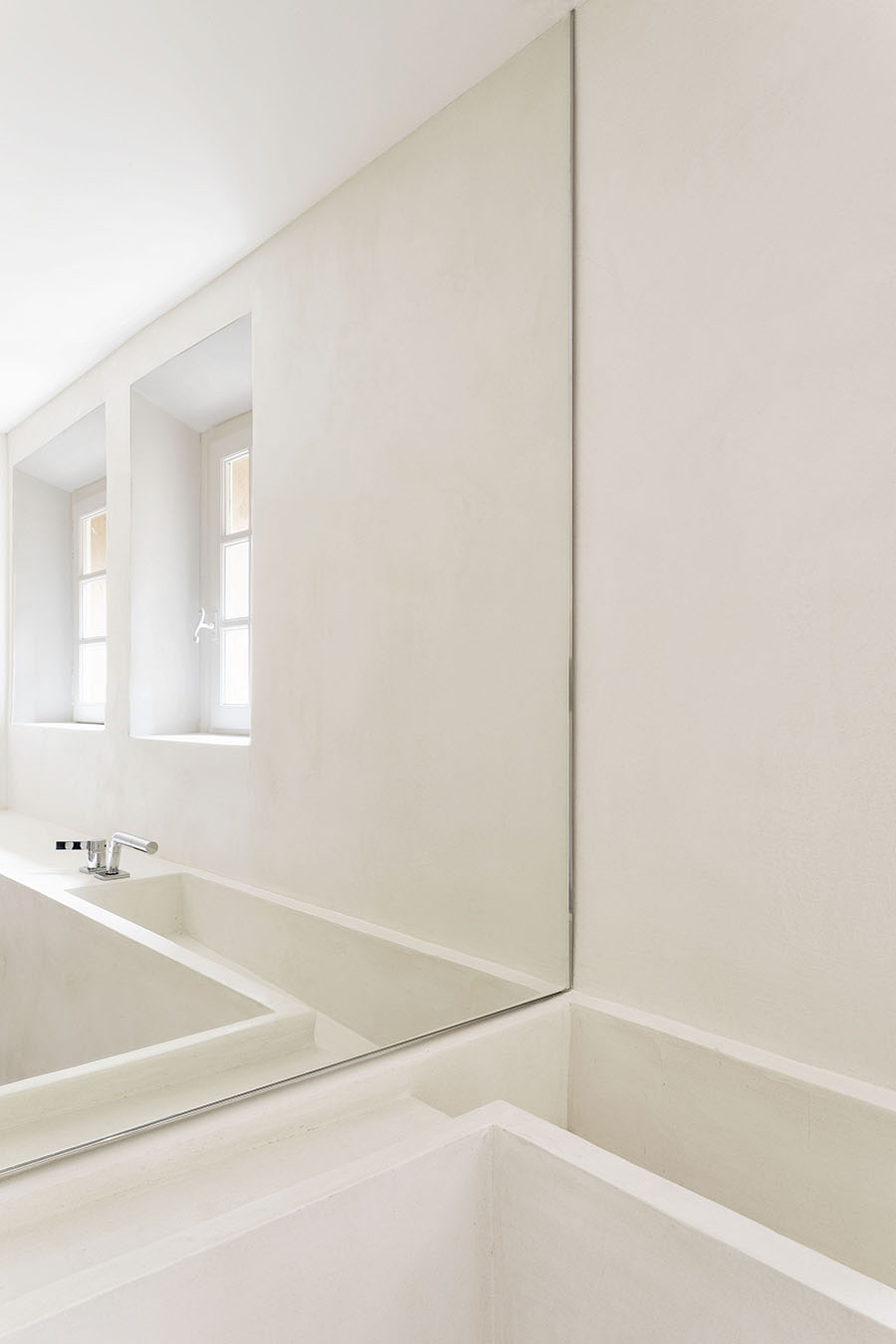 “In Japanese, a karesansui is a dry landscape garden, often called a Zen garden. Inspired by the vegetation surrounding Moulin des Ribes, Paul Brissonnet and Alexandre Benjamin Navet designed a contemplative interior in which natural stone is the predominant material. “We wanted to alter the classic canons of living,” they say. Each room is marked by a transcendent element: in the small antechamber, it is an illuminating mirror produced by Blackbody from a design by Paul and Alexandre, made especially for this project. It lights up as guests enter, brightening a sparse room that frames a column of Saint-Leu limestone topped by an ikebana arrangement of plants from the garden. In the bathroom, water from the shower runs into a fissure in the floor reminiscent of the ancient irrigation canals still in use in the Moulin’s land, making the same relaxing sound. Finally, in the bedroom, every functional element folds away—the desk, bed, and closet—in favor of a rarefied atmosphere.” 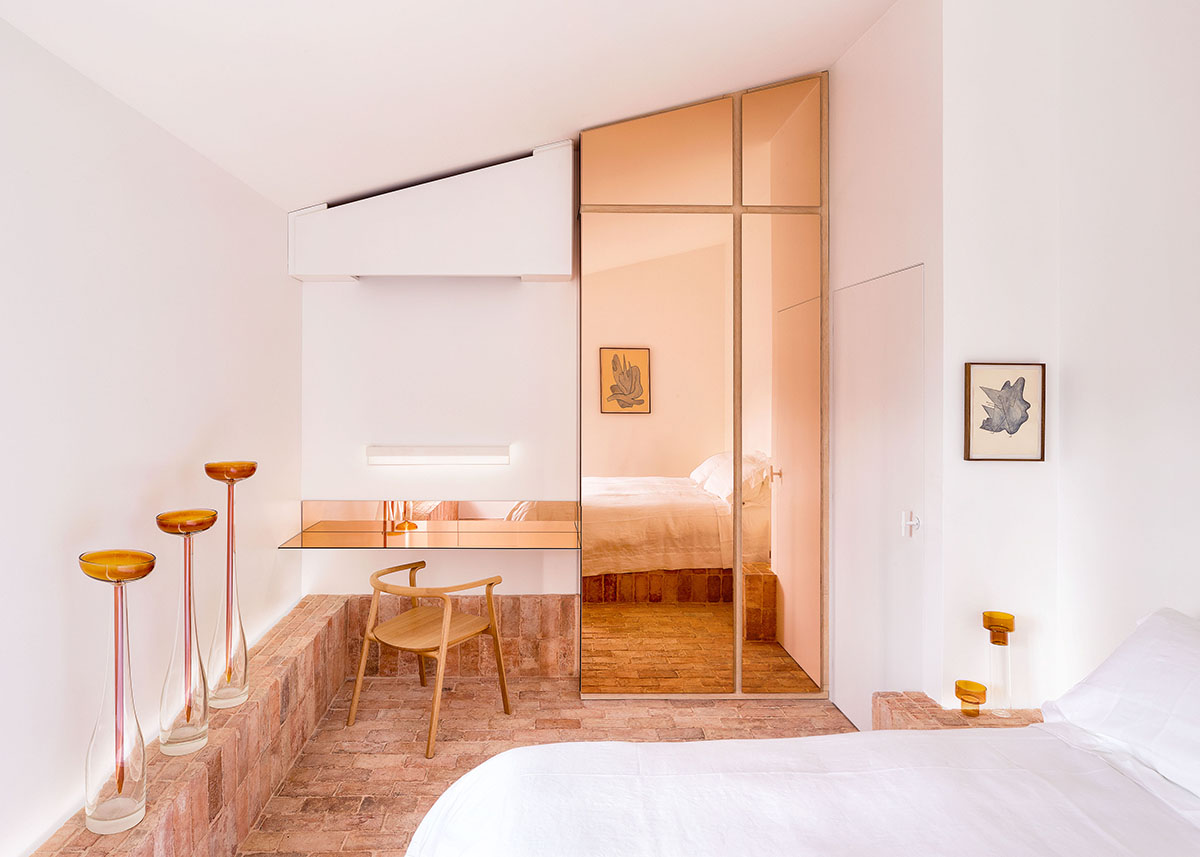 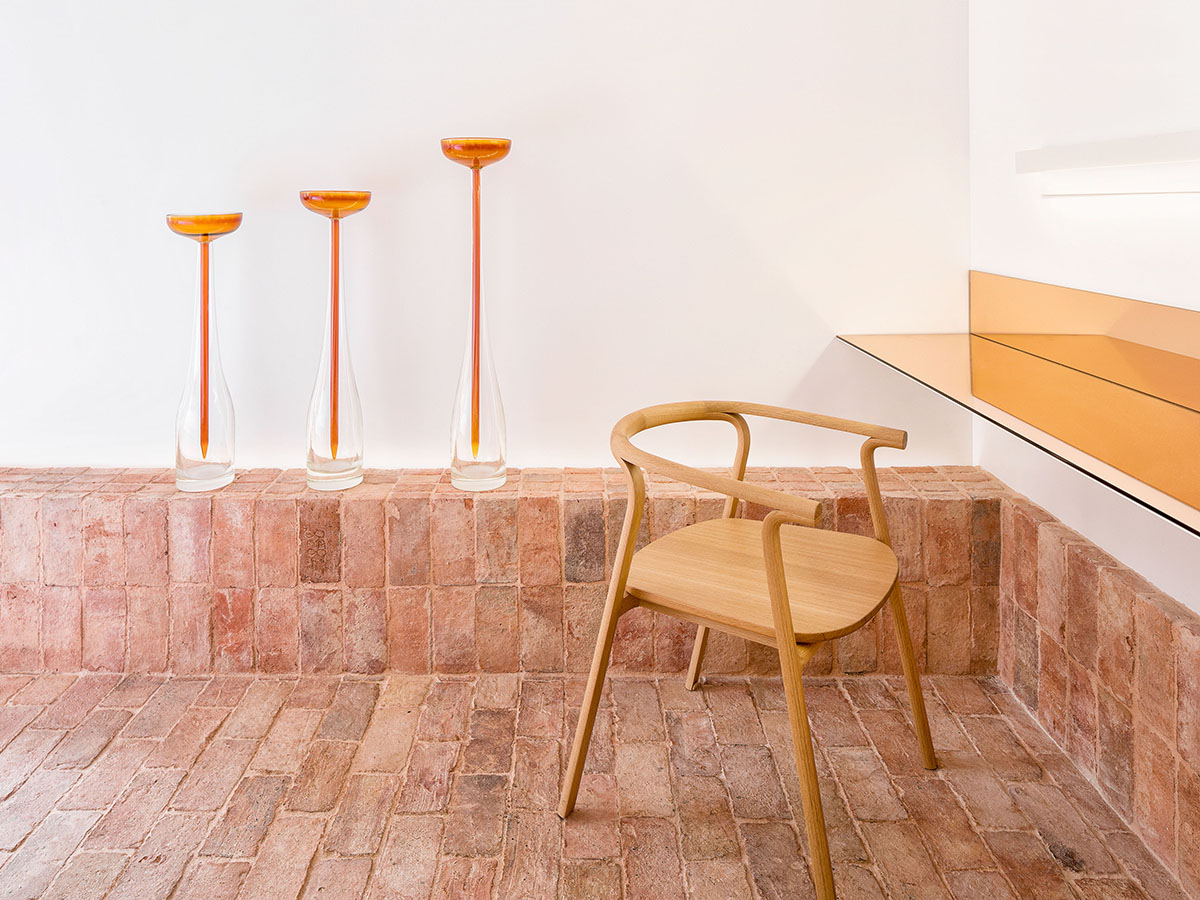 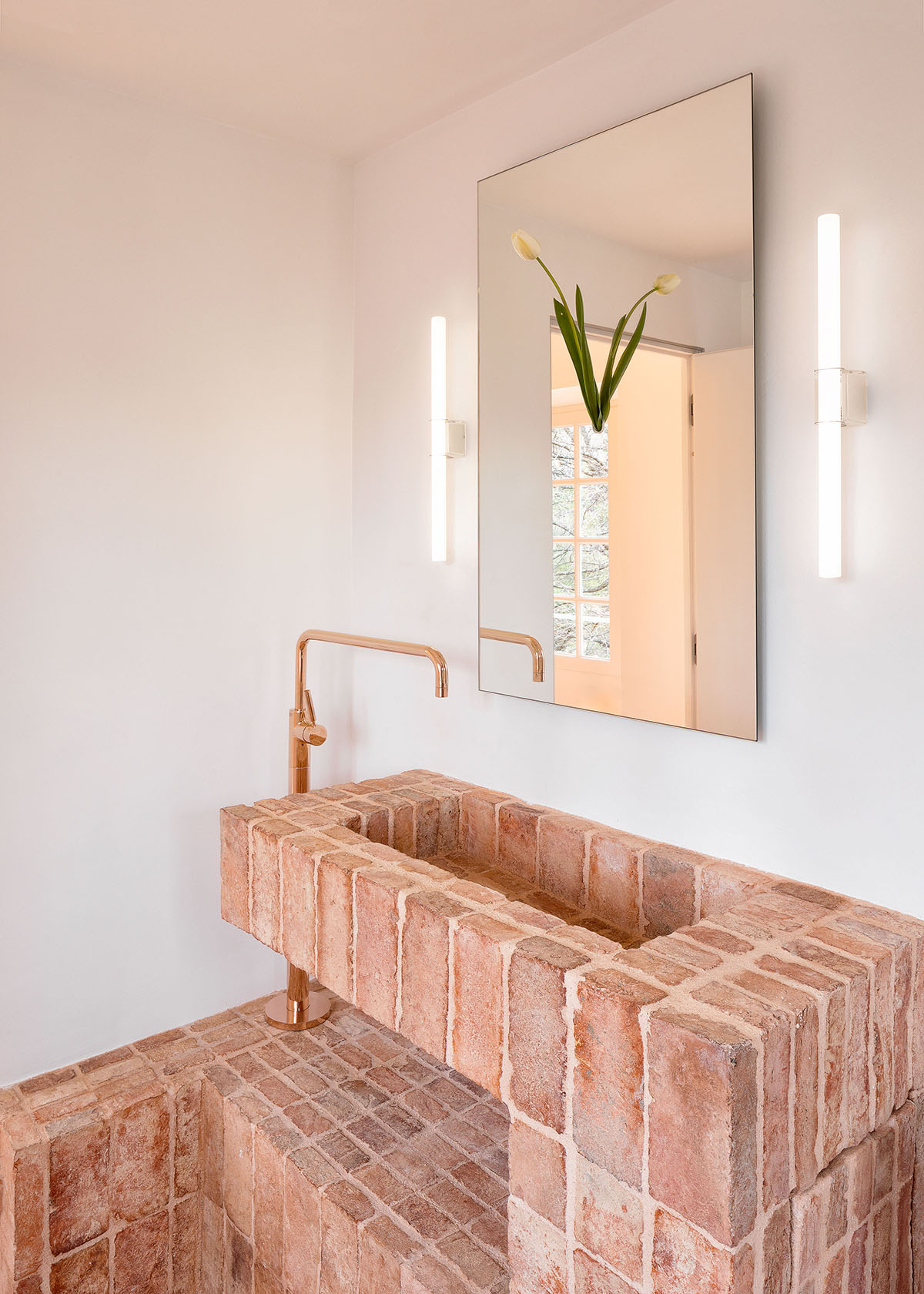 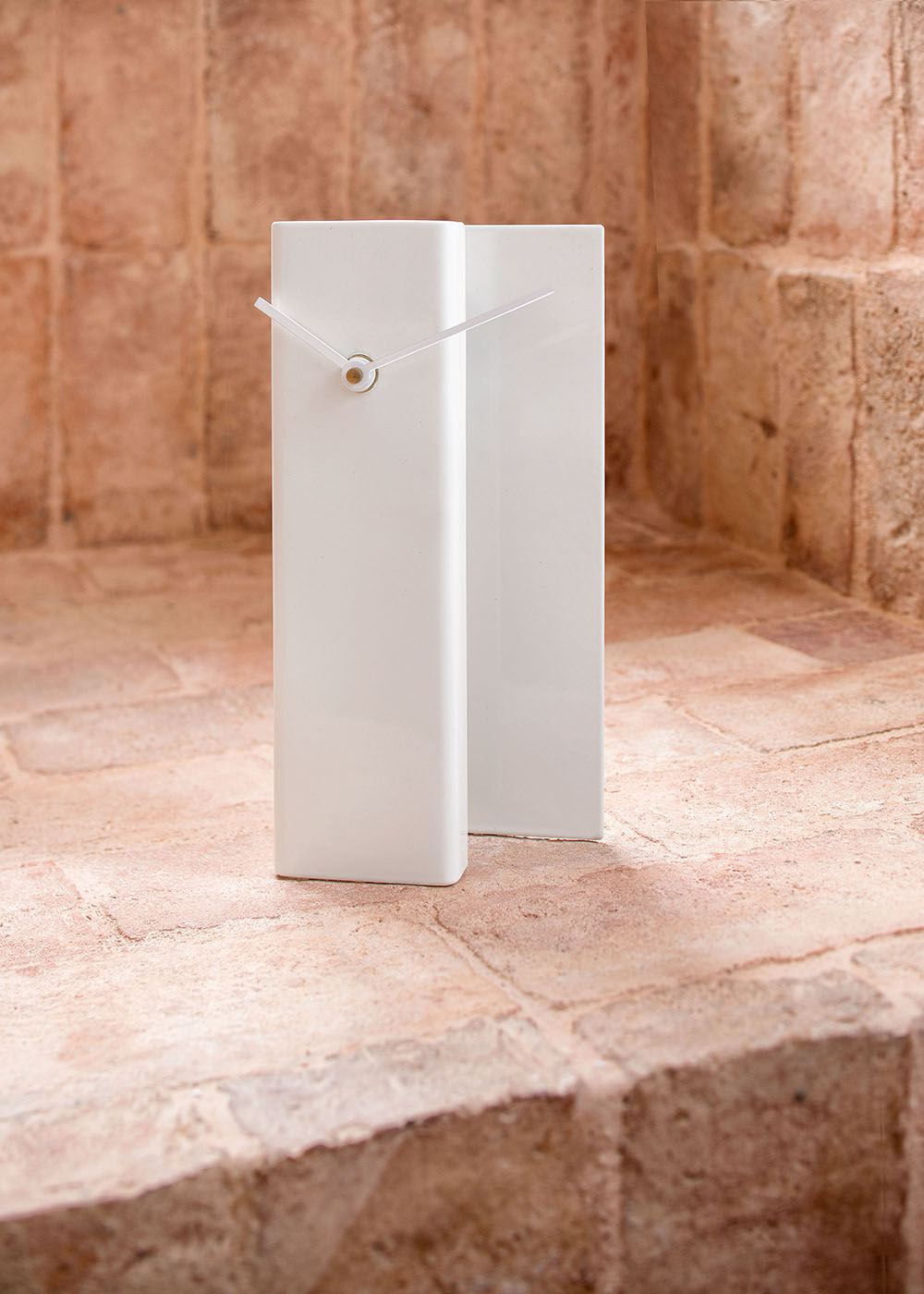 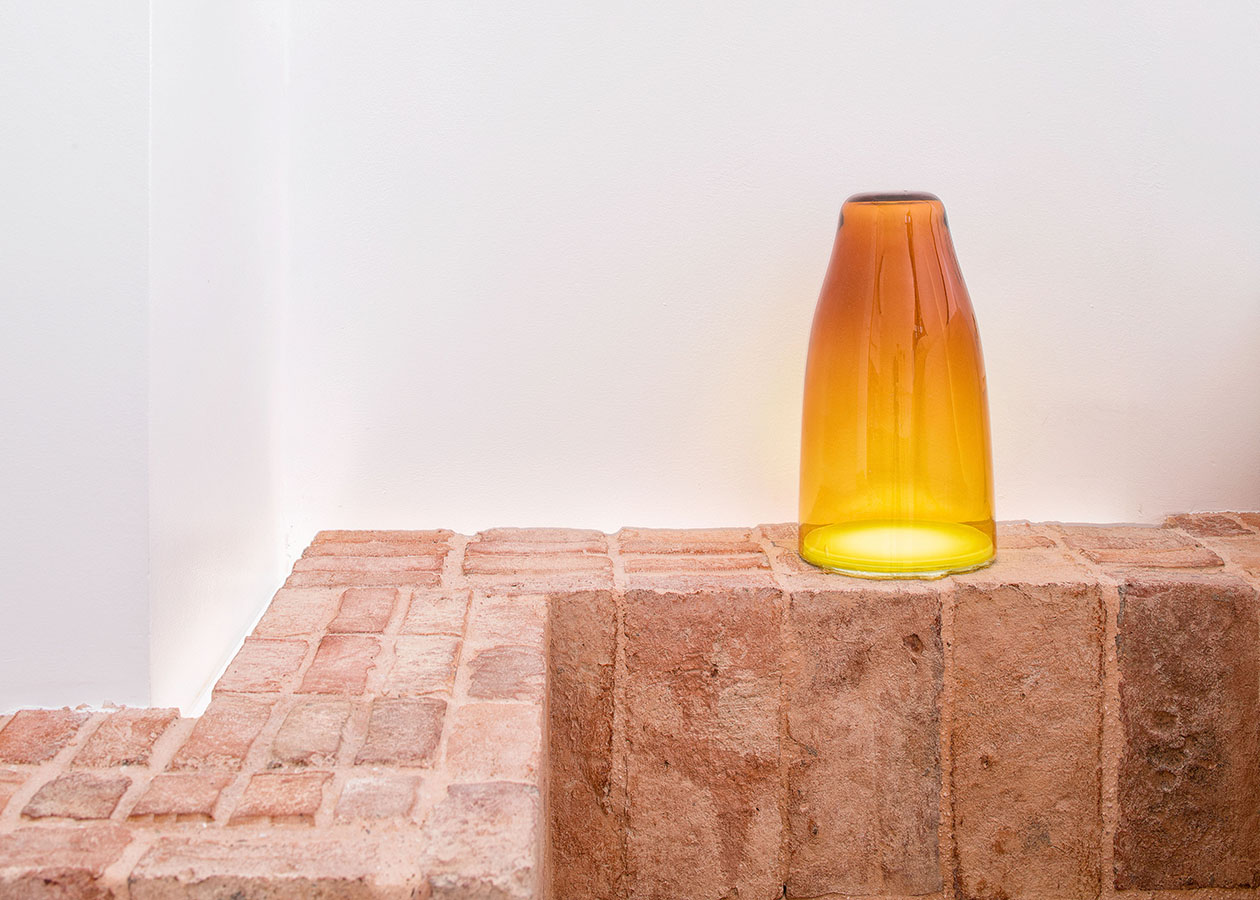 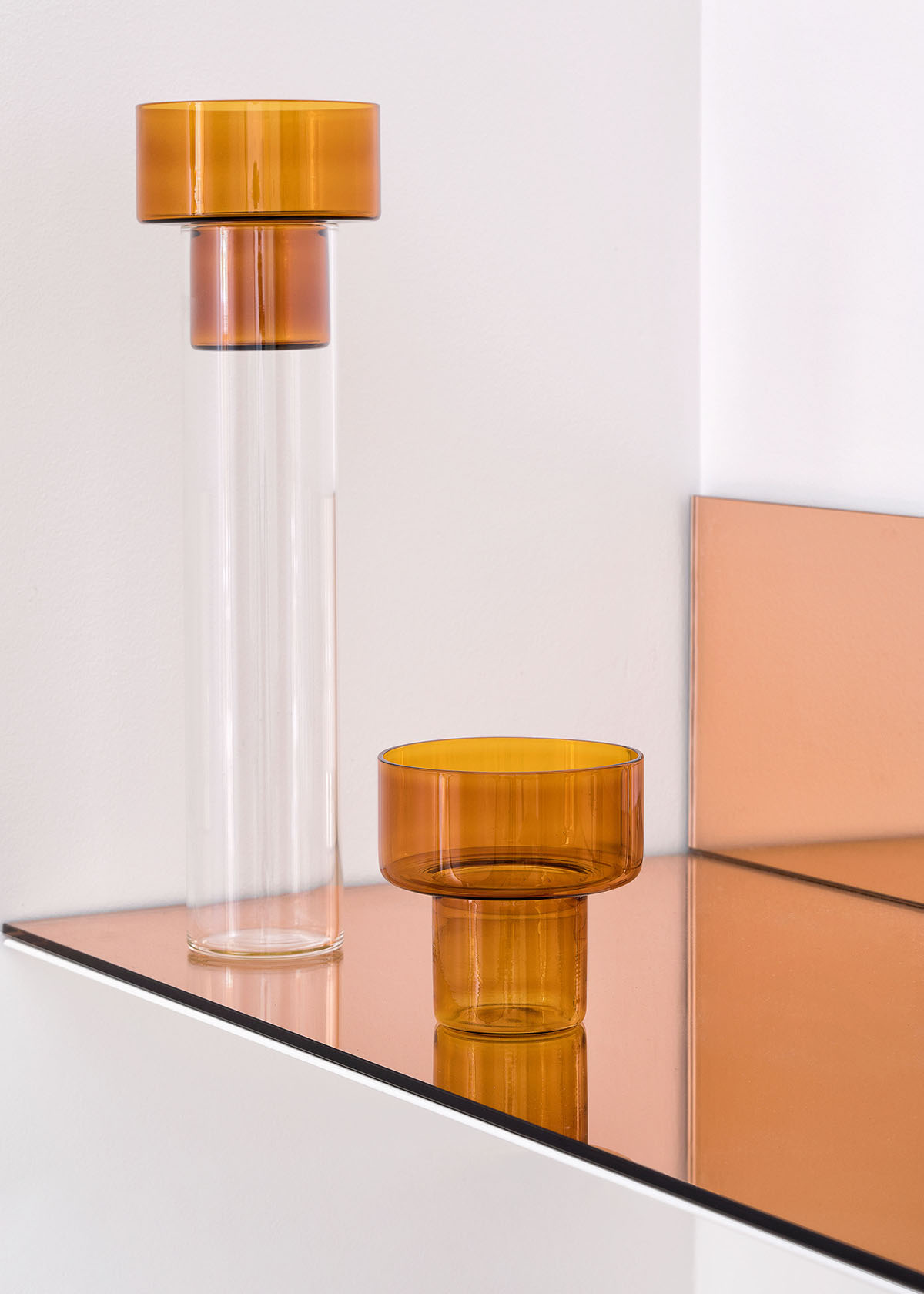 “‘For this project, we delved into the nostalgic overtones of the Provence region,’ Louise Naegelen, Adrien Gadet, and Benjamin Lina say. ‘Inspiration came from our memories of the scents, light, and weathered materials.’ Studio Quetzal has elaborated a lucid and penetrating synthesis of the atmosphere at Moulin des Ribes, resulting in an original and effective interpretation. The bedroom was transformed by the substantial introduction of terracotta brick from Salernes, a place in the nearby region of Var. The entire floor surface of the bedroom was covered with this rough, intense material. Blocks of brick rise up along the walls to structure the room like a shallow basin, the edges of which are a combination of seating, a shelf for objects, and a base for the bed. The perimeter is fitted with a slim gap separating the brick from the white walls. Inserted here is a strip of cool white LEDs that wash the wall with faint, raking light up until the ceiling, similar to the impalpable vapor of aromas in Grasse.” 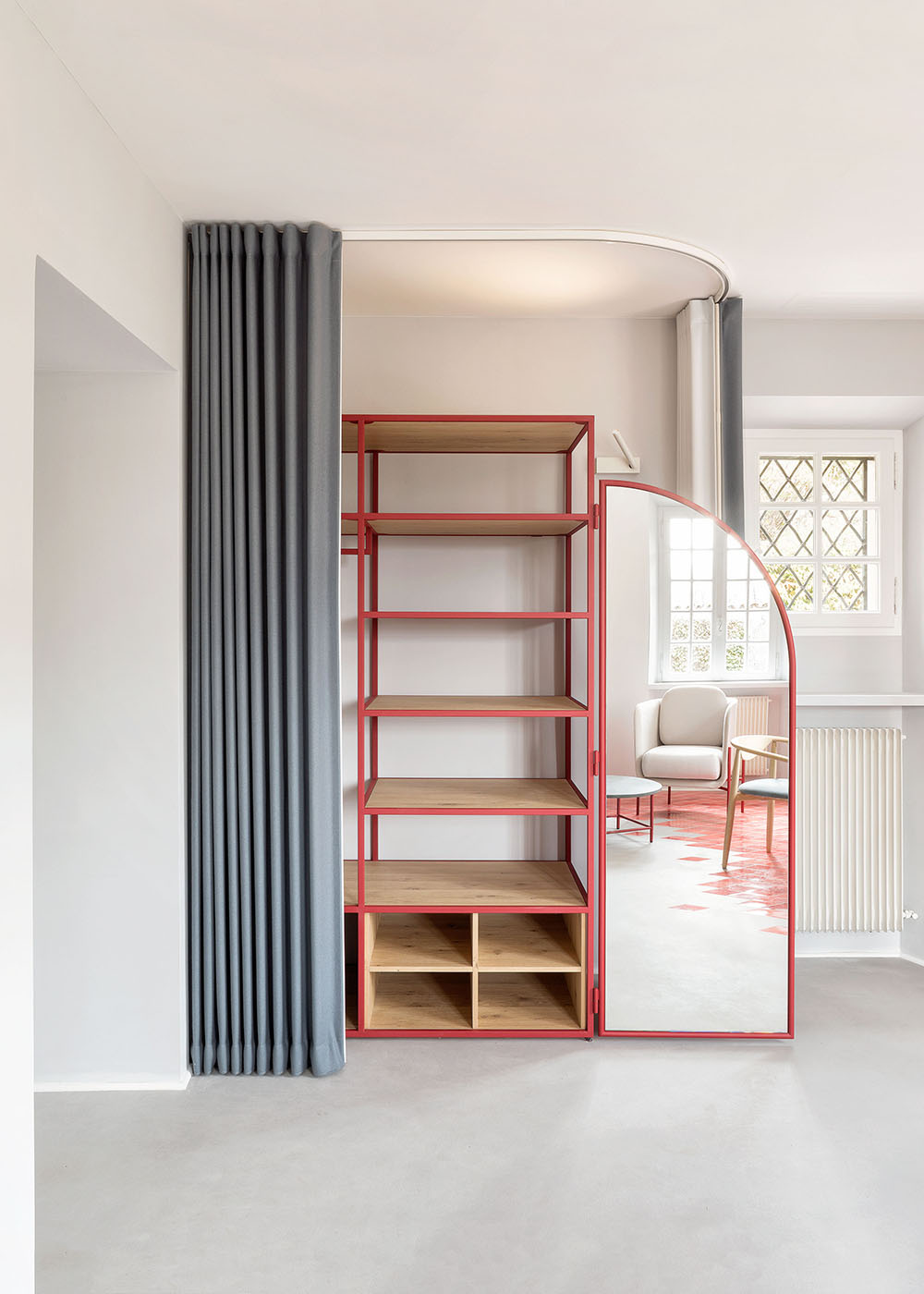 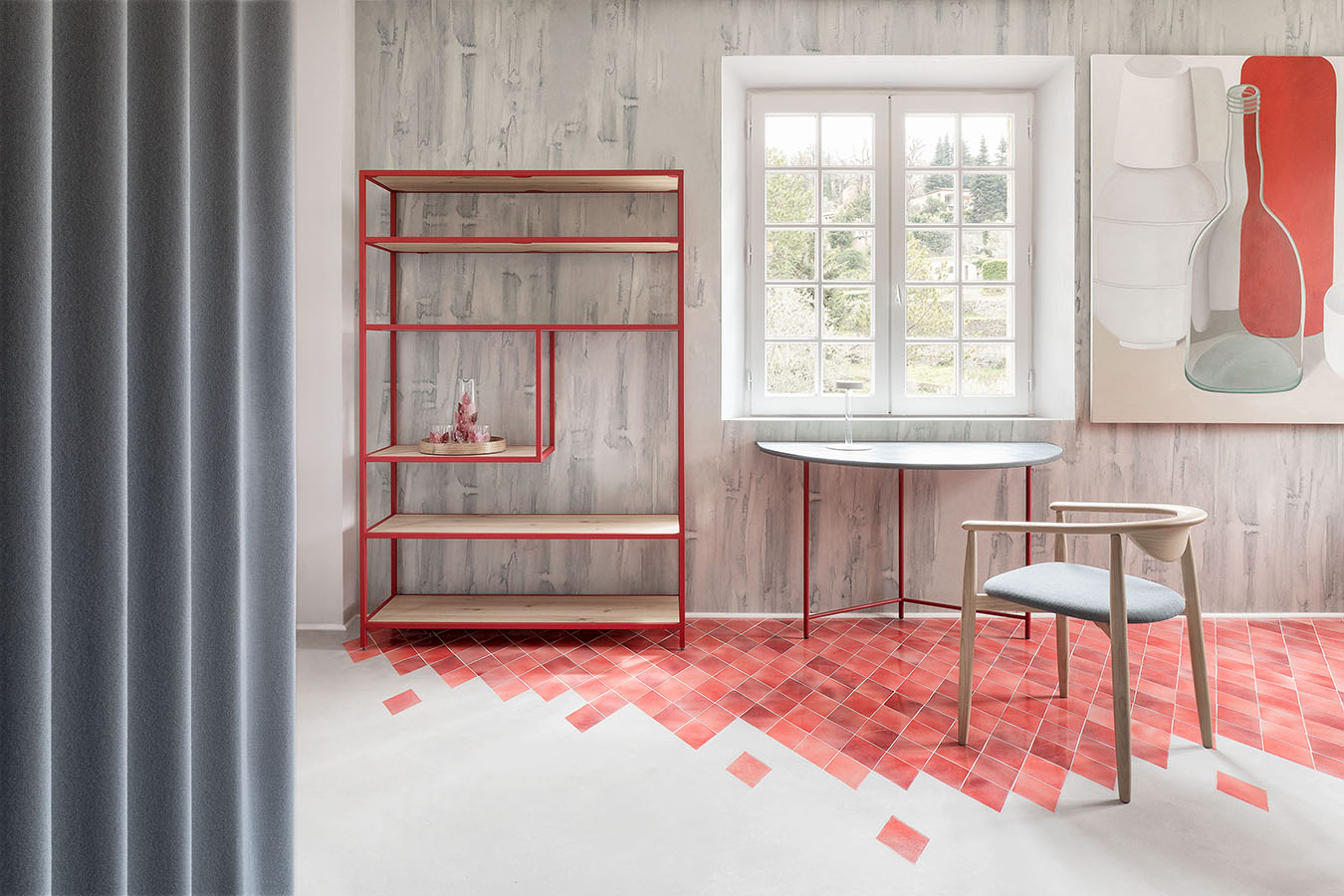 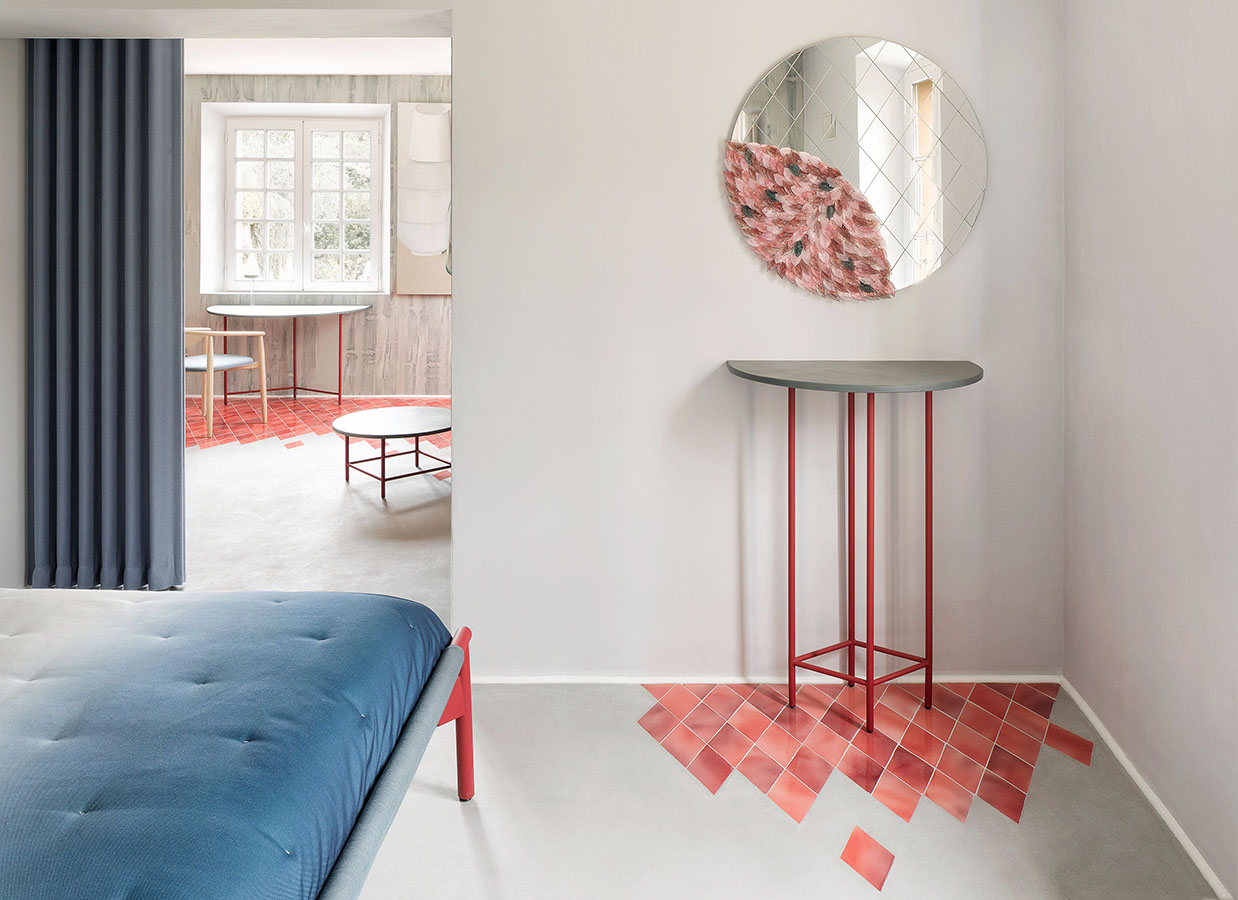 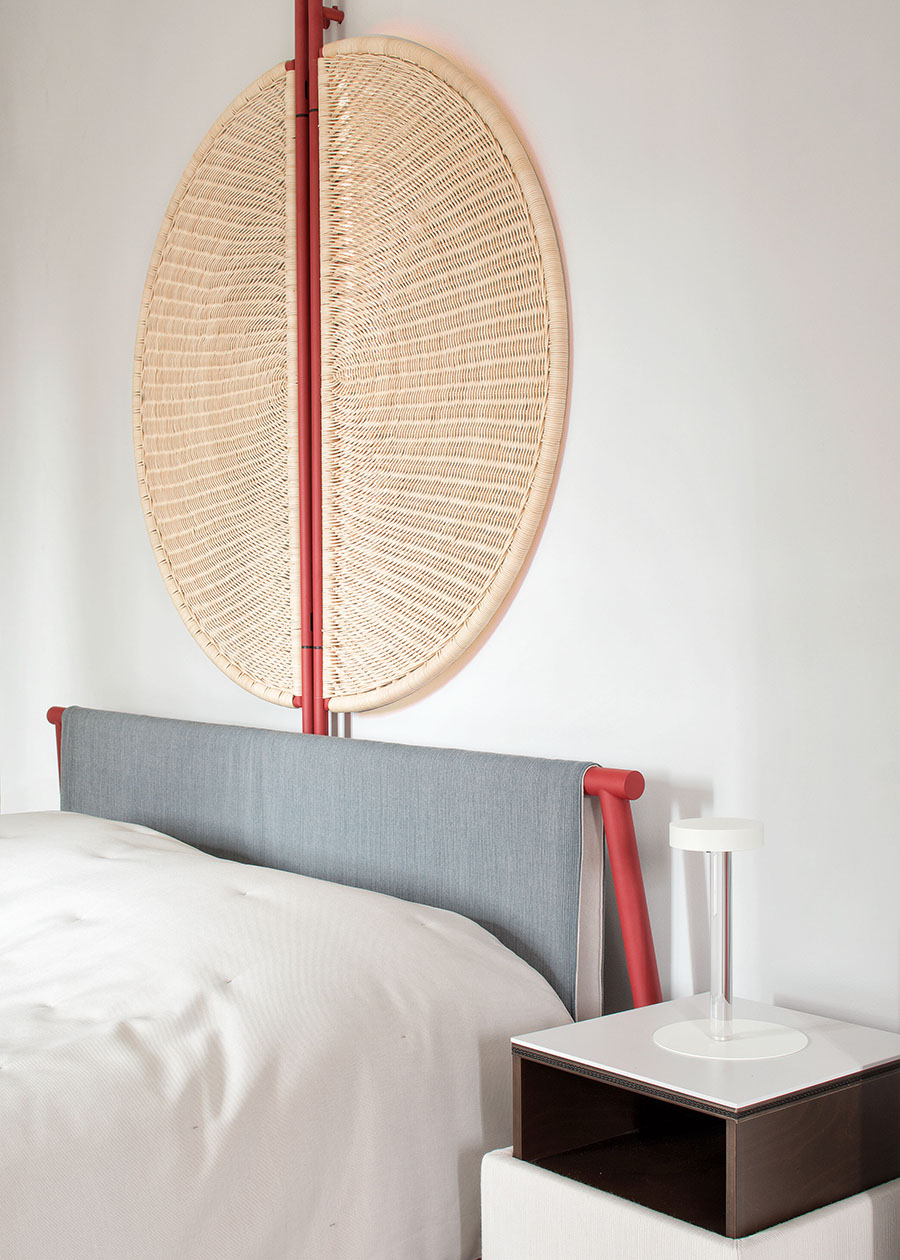 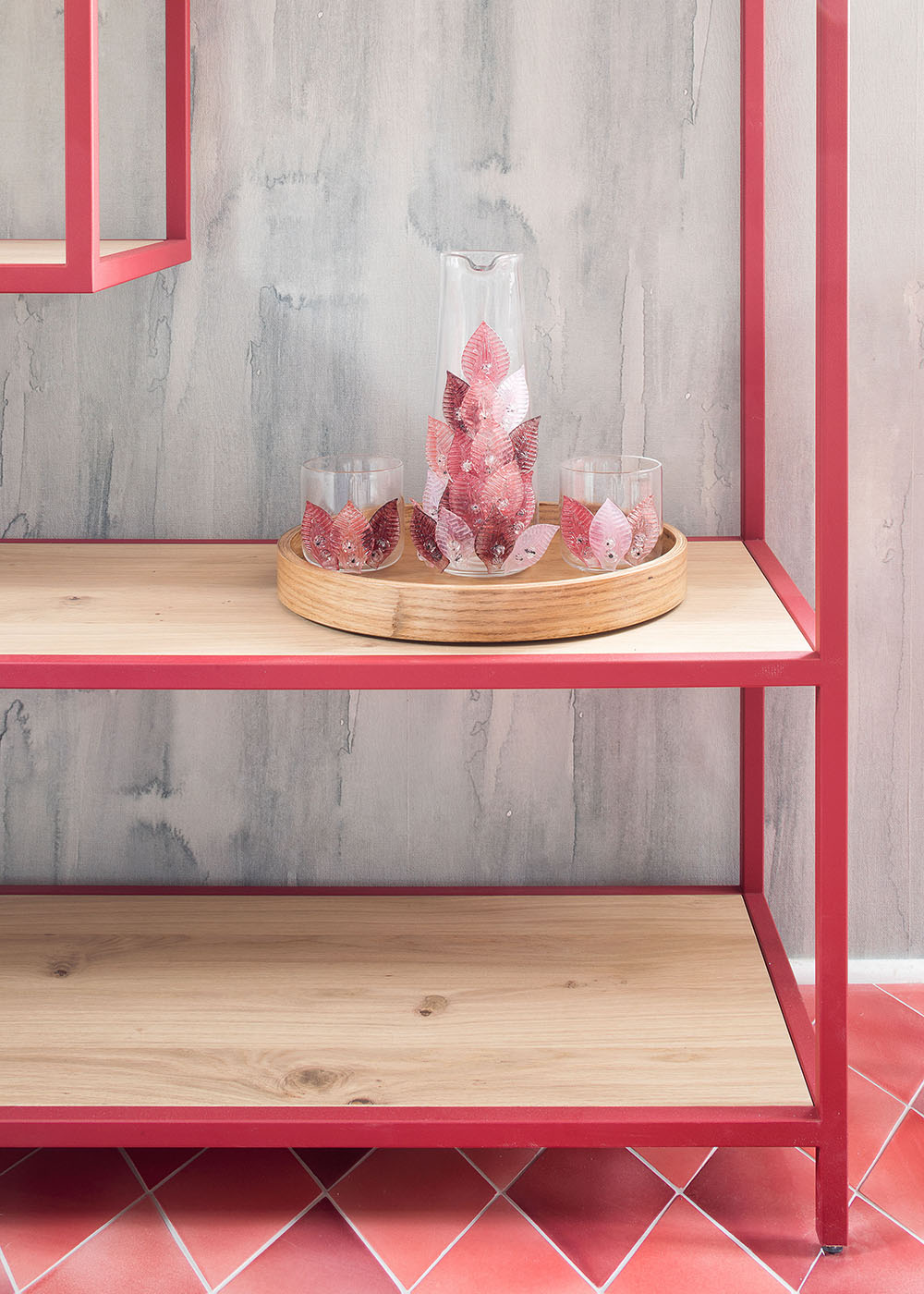 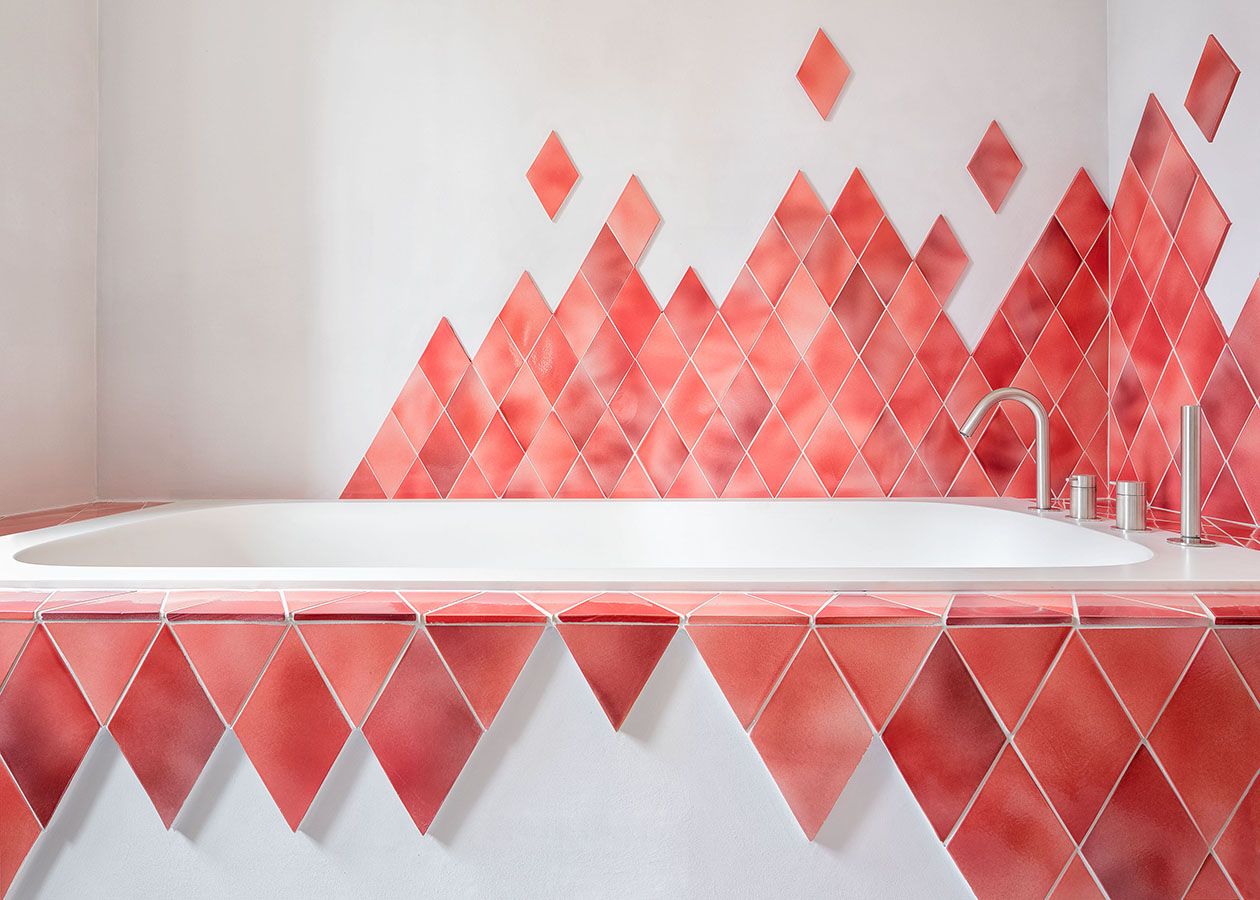 “The traditional gathering of flowers in the hills of Grasse, with its warm palette of colors, gave rise to the glazed, diamond-shape tiles covering portions of the floors and walls. The tiles were specifically produced for this location after an attentive experimentation at Botteganove, a long-standing ceramics company in Vicenza, in the Veneto region of Italy. Craftspeople there painted the tiles individually by hand with streaked, luminous strokes, whose combined effect is similar to a carpet of petals. Giorgia and Daniele spent time at the Moulin des Ribes during different seasons in order to take in all its particularities—the nature, colors and scents. ‘The interiors we imagined are a personal, intimate diary of the way we experienced this place,’ they say. ‘The chromatic and formal content of our design is an homage to Grasse.'” 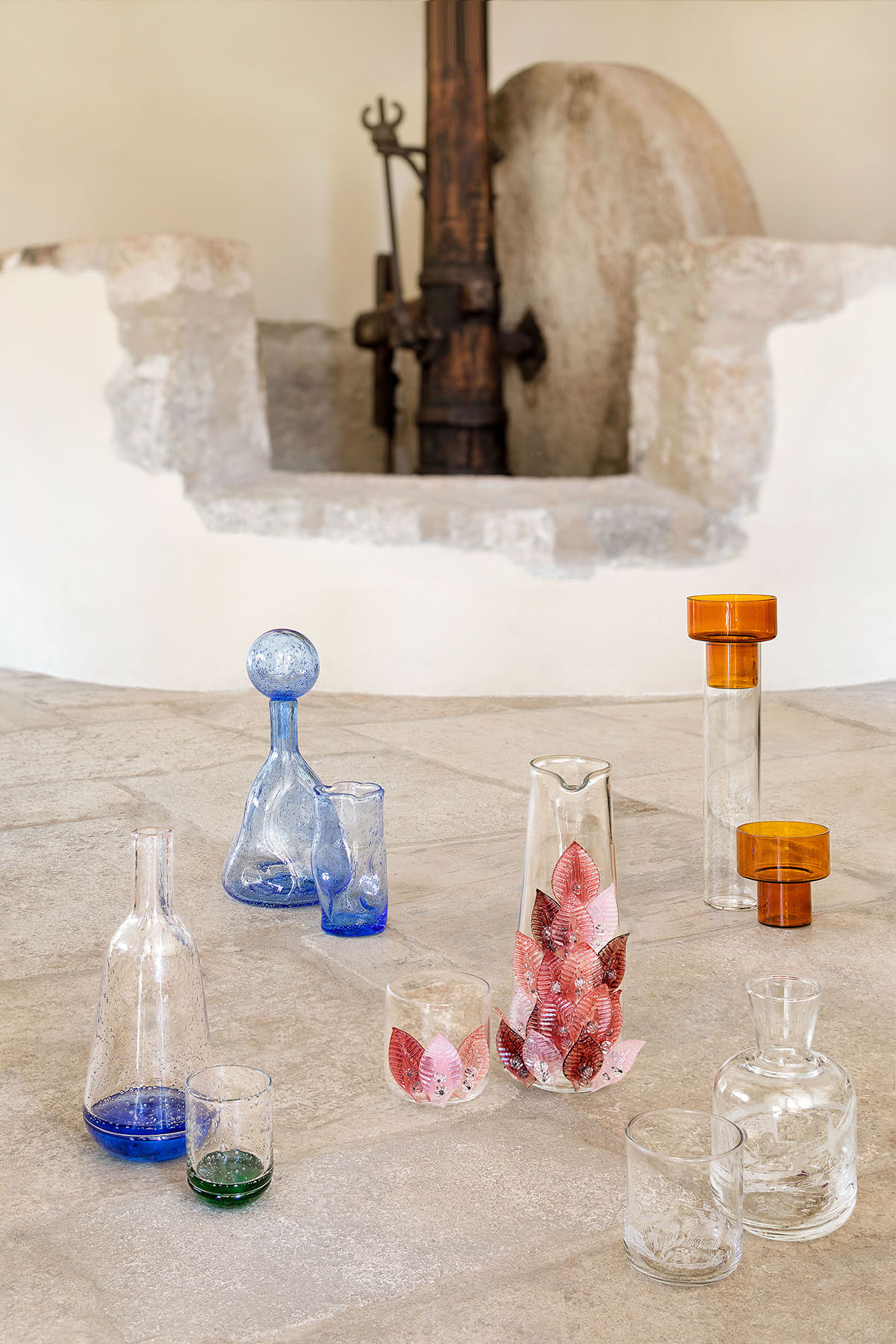 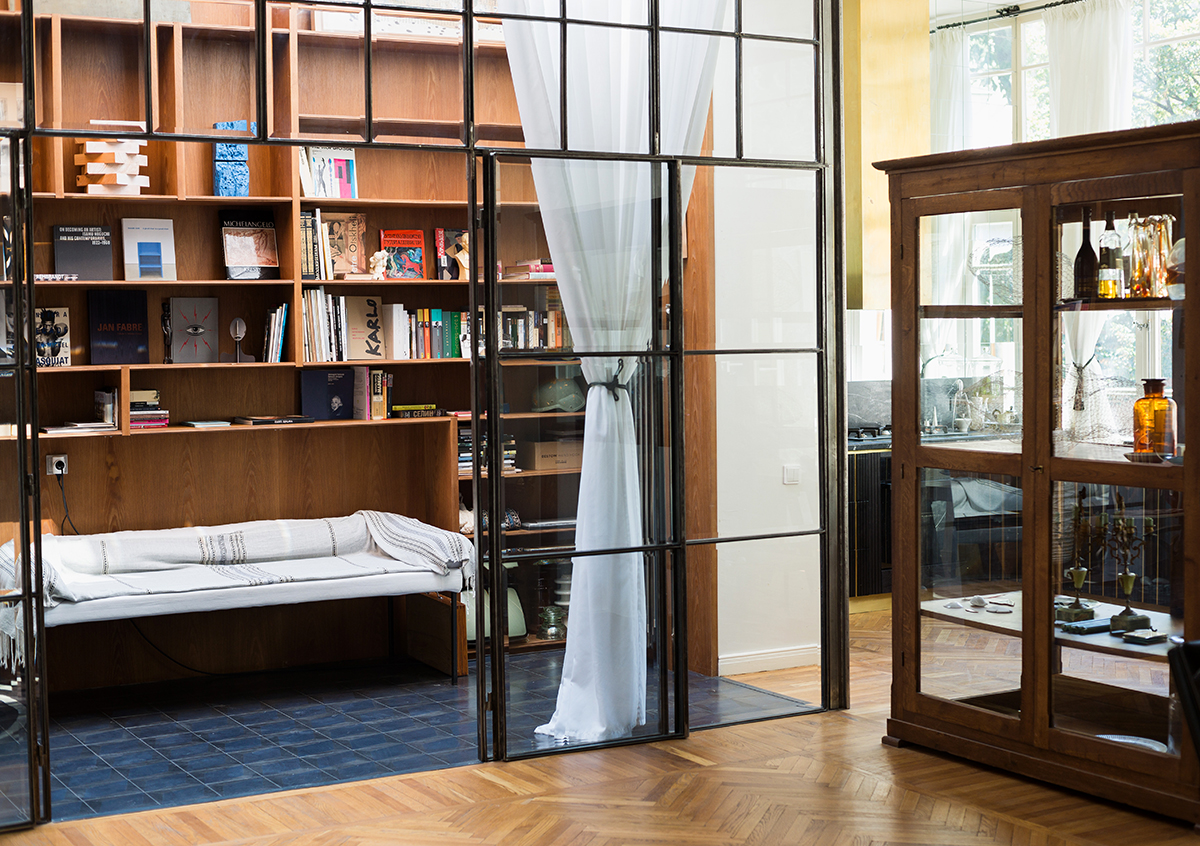 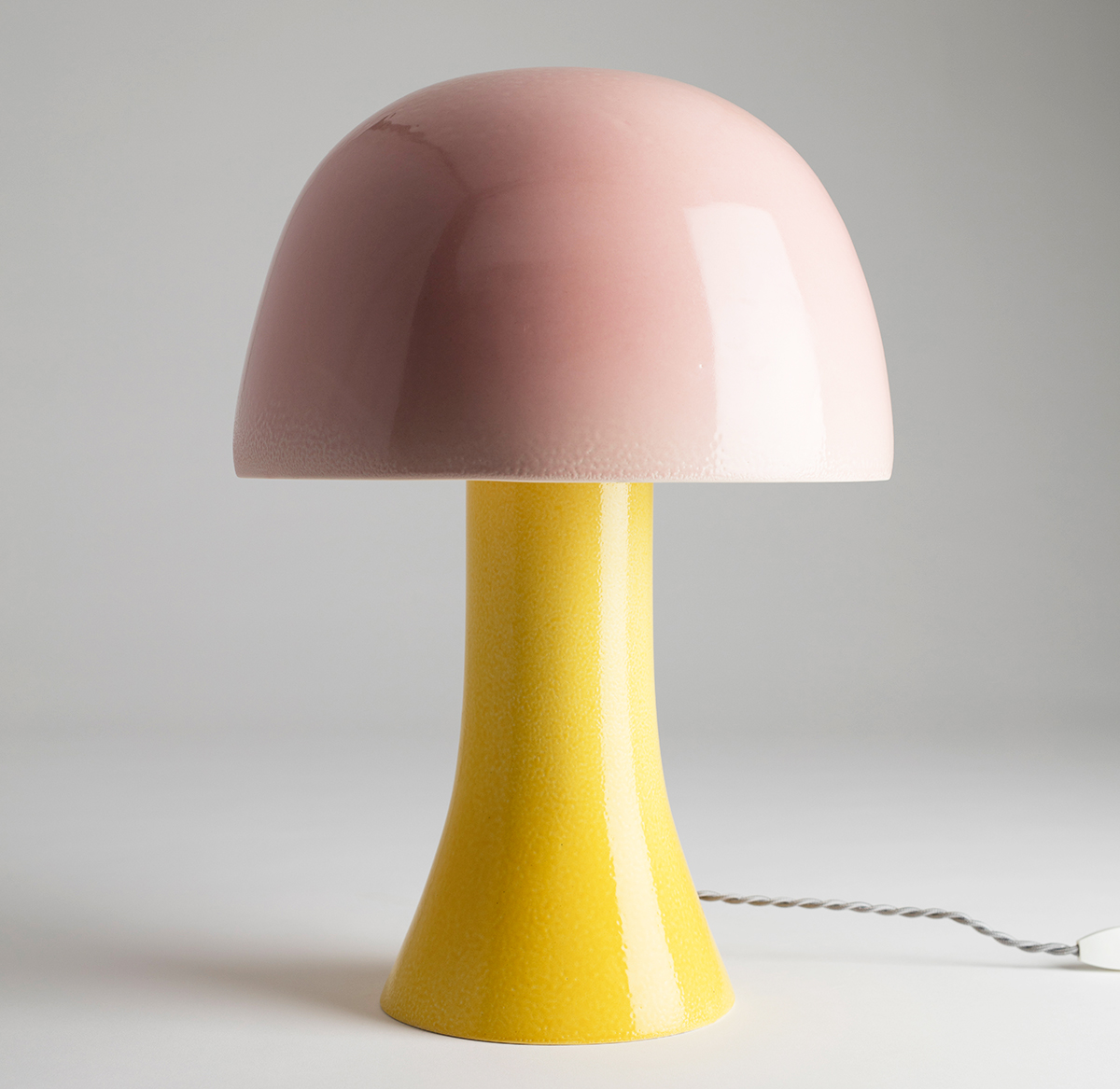 A Belgian Sculptor on the Perils of Minimalism

Last Thursday, the New York design gallery Demisch Danant opened “I am I,” an exhibition that presents more than 90 handcrafted lamps, vessels and objects from Jos Devriendt's 20-year career. Devriendt, 53, is known for espousing minimalism, though he stops short of defending minimalism for its own sake. It’s simple to make a minimalist object, the shaggy-haired artist explains, “but in the end it’s like so straight,” or fine-tuned to perfection, “that you don’t have an excitement about the forms.” And when that happens, he warns, it becomes boring.
More 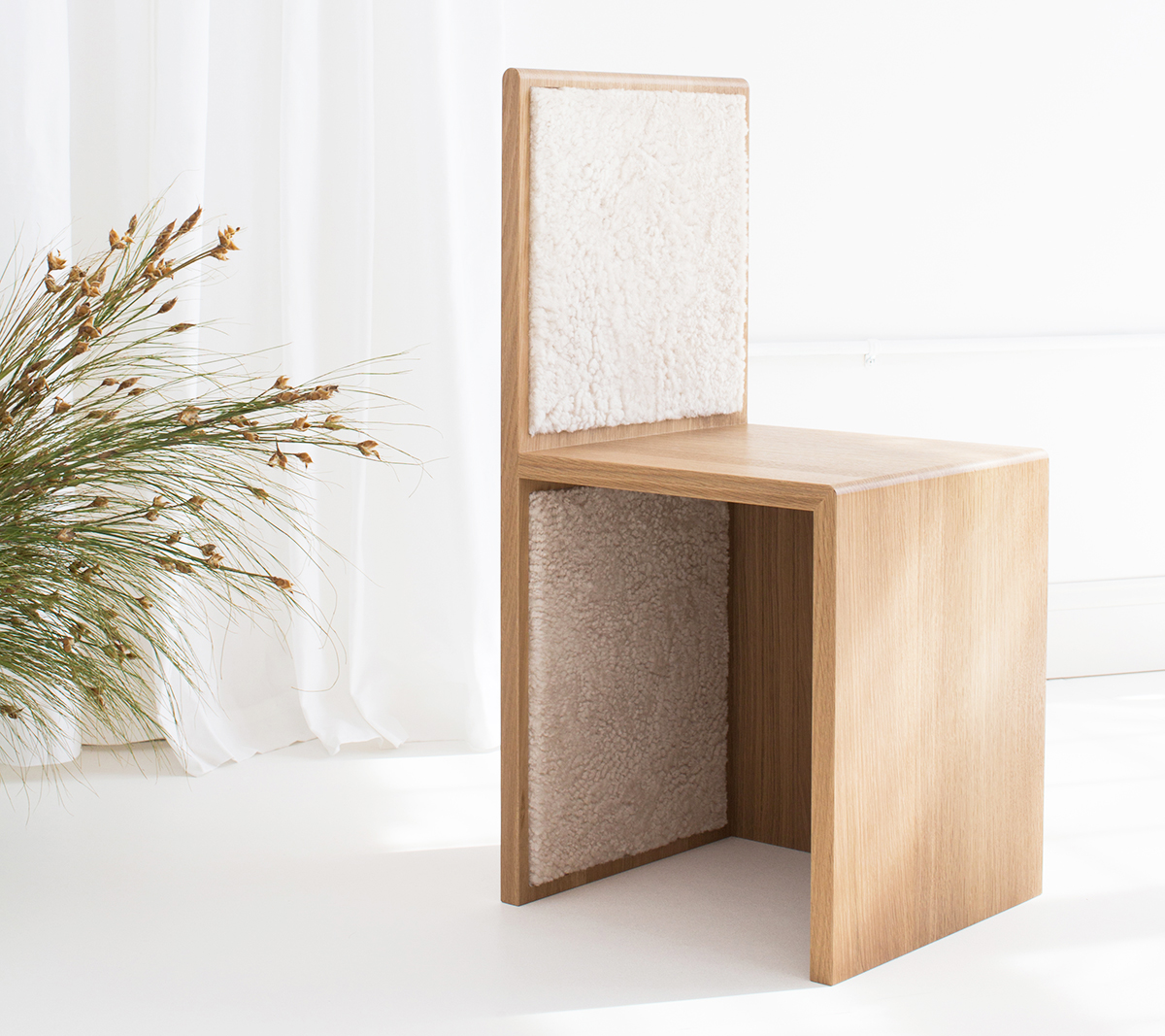 It’s easy to see parallels between the work of Ben and Aja Blanc and that of fashion designer Phillip Lim, in whose NoHo shop they’re installing their full new collection — the Judd-inspired Marfa chair, a companion side table, layered “mirror collages” in peach and antique tones, and large-scale wood-turned vessels — during Sight Unseen OFFSITE.
More