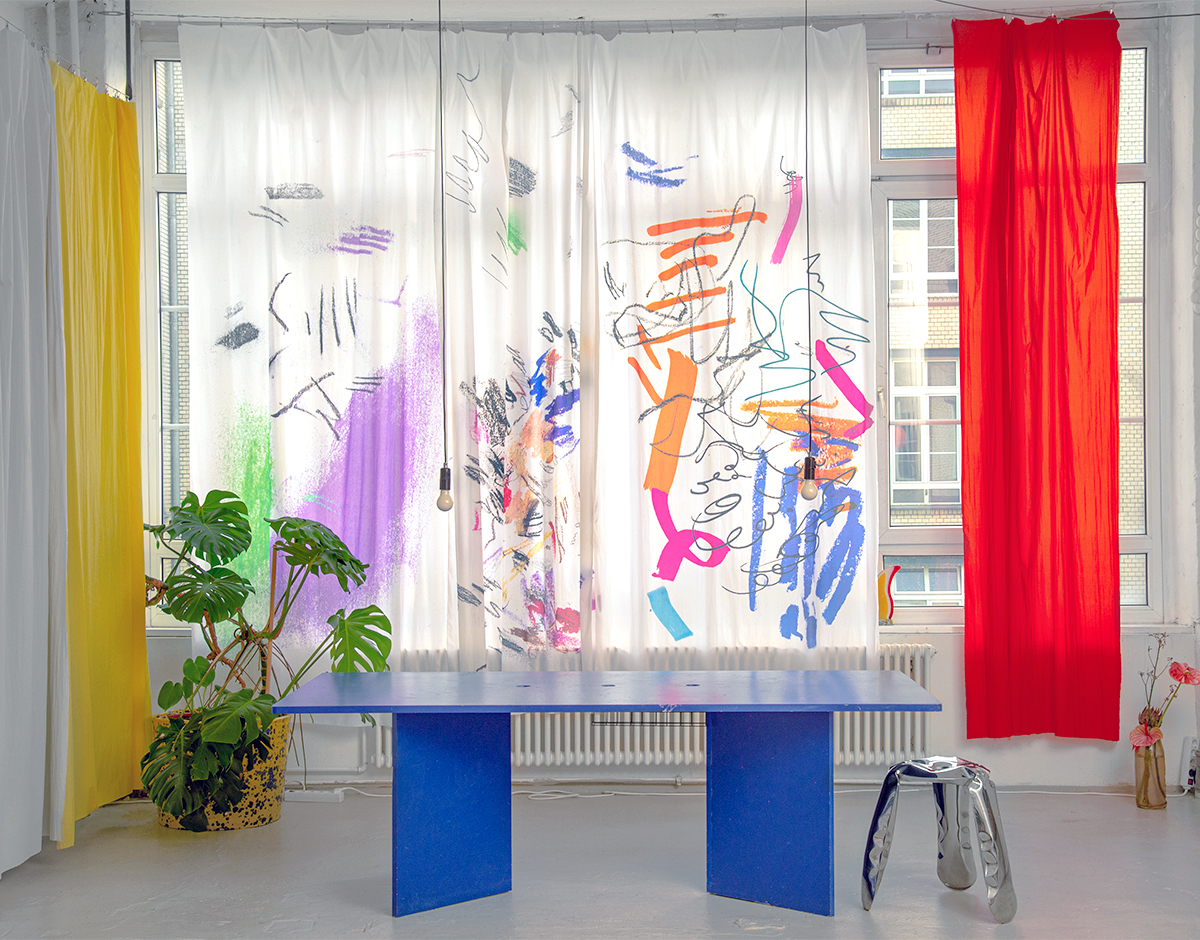 With Prints Inspired By Art-Store Pen-Test Doodles, These Curtains Are ‘Free and Wild’

I tend to think about Sarah Illenberger‘s photographs in the same way I think about avant-garde minimalist art — when she replaces a dart flight with a butterfly wing, or a saw blade with a pointy cactus paddle, the effect is not unlike when someone stands in front of a Lucio Fontana slash painting and says, “I could have made this!” and someone else answers, “Sure, but you didn’t.” The Berlin-based artist and illustrator has a talent for recontextualizing everyday items in ways that are deceptively simple, yet at the same time so clever that there’s an irresistible kind of magic in it. The same is true for her new collaboration with Danish textile purveyor Kvadrat, a limited-edition series of three vibrant curtain panels created by scanning the little pads of paper that people test pens on in stationery stores — the unremarkable made remarkable, through little more than a flash of creative inspiration and a change in scale.

Illenberger created the collection, called Unscripted, by scanning a bunch of those pen tests and digitally manipulating them until she found compositions that were balanced and colorful enough to function almost like vibrant paintings in a room. She’d been casually collecting the anonymous doodles for awhile before Kvadrat approached her about a collaboration for its Kvadrat Lab series (formerly known as Kinnasand Lab), drawn to them in part because “stationery and art supply shops have always been special places for me,” she says. “I just love the banality of the materials you find there, like card and paper.” (She also paid homage to those materials in a second, ancillary part of the project: a new palette of solid textile colors, created in conjunction with Kvadrat’s latest core collection release Storylines, that have names like Cardboard, Wet Ink, and Faded Ink.)

The name Unscripted has its own significance, referencing not only the unselfconsciously spontaneous nature of how people use pen-test pads, but also the fact that Illenberger characterizes both the final curtain designs as well as the overall aim of her design practice in similar terms. We spoke to Illenberger about those ideas and more in the interview below. 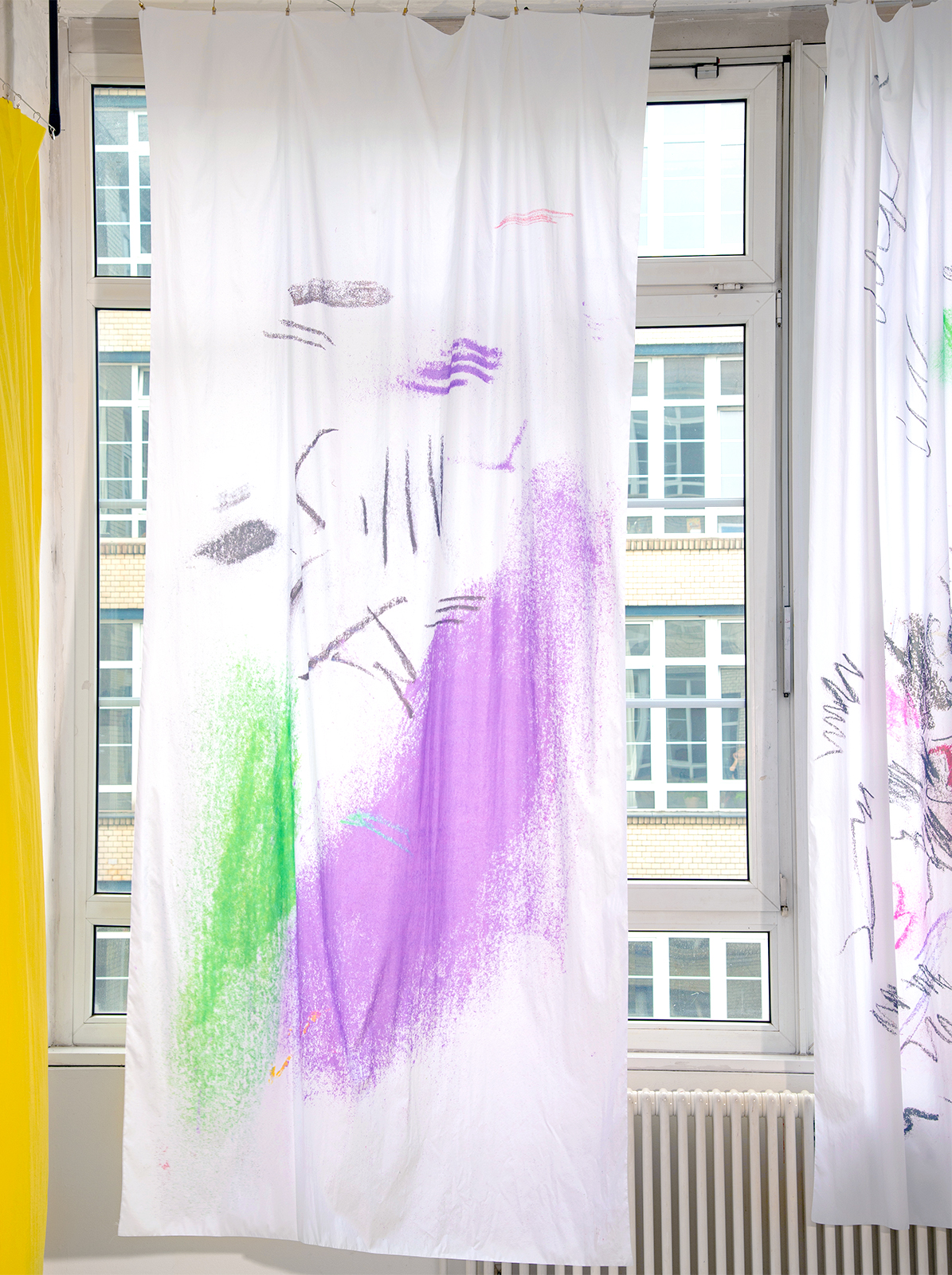 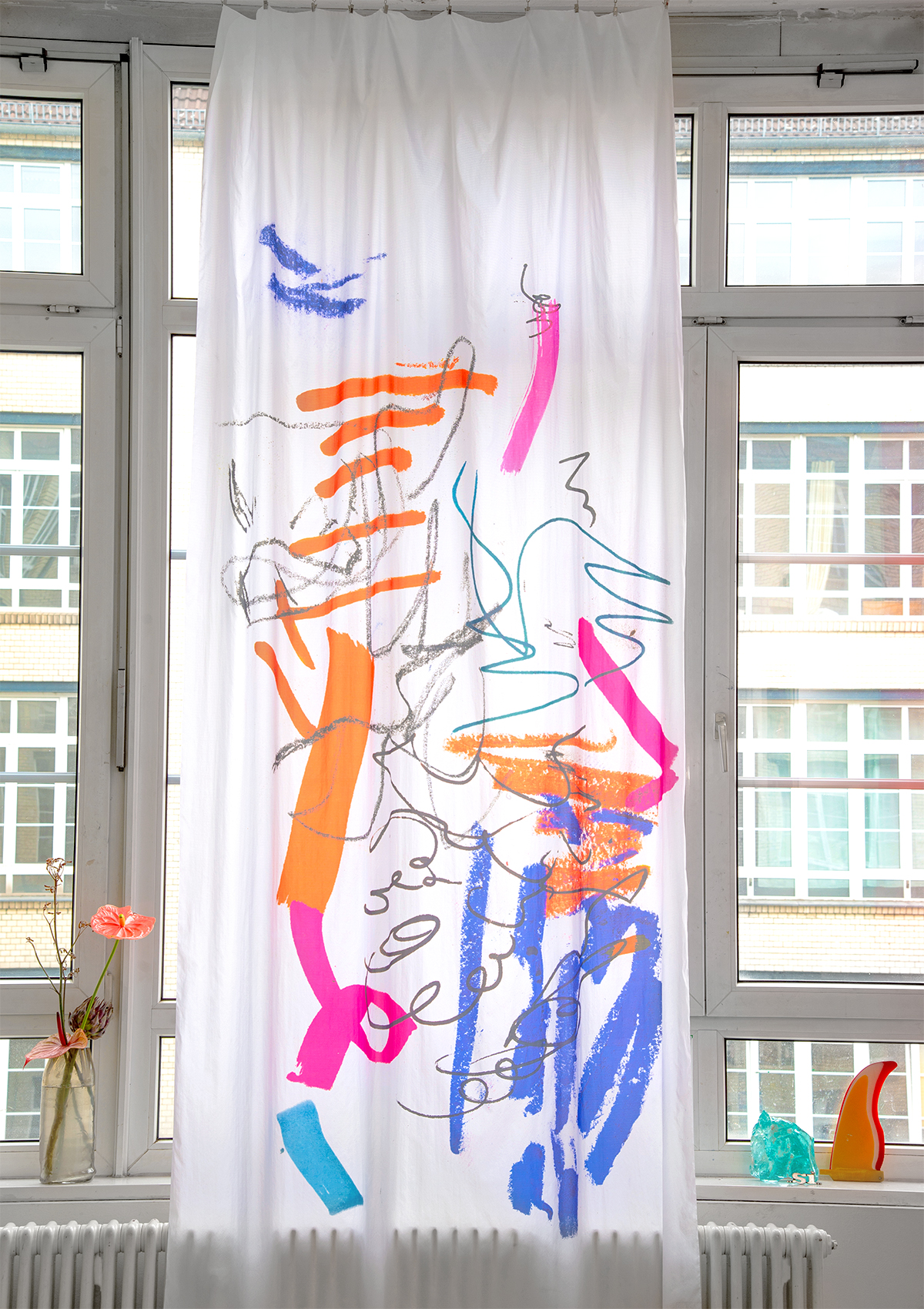 This is your first textile-design project — how did it come about?

Kvadrat said do what you want to do, and here are some new technical innovations that you could use, but I was more interested in doing something that wasn’t so technical. Instead of going into fabric weaving, I just really wanted to make something bold and graphic. I had this collection of test papers, so I went back and picked the best and scanned them and recomposed them and made new designs from them — overlapping two or three designs, combining different papers, and cropping and turning them. We had ten panels, and in the end we picked the three strongest ones.

Where did the inspiration to base it on test papers come from? You been collecting them, but what did you find so intriguing about them?

I love collecting things generally. I had a few test papers before; I had been sticking them in my sketchbook thinking they could become something at some point. I went back and collected more and more for this project, and I also had a guy in a local stationery shop who collected them for me as well. What’s so great about them is that they’re so free, and so undesigned. There’s no concept behind it, and no one is trying to create something beautiful or lovely. It’s an anti-design. It’s got effortless beauty. Test papers represent this moment when your subconscious takes over, and no one’s watching you, and you’re not intending to do something great. There’s something so authentic about it, kind of like children have — something just raw and wild.

When you were digitally remixing the designs, what were you looking for exactly, compositionally speaking?

A lot was about negative space, to have some sort of contrast or a nice balance, and to work with the vertical and the horizontal of such a long panel. I was trying to play with the proportions and mix the colors nicely. Also, the three panels are quite divided in terms of their materiality: One’s more graphite and one’s more marker and the other’s more pastels. Having one that’s really bold and one that’s quite fine and one that’s quite expressionistic — that was interesting to me, to have three different styles next to each other. 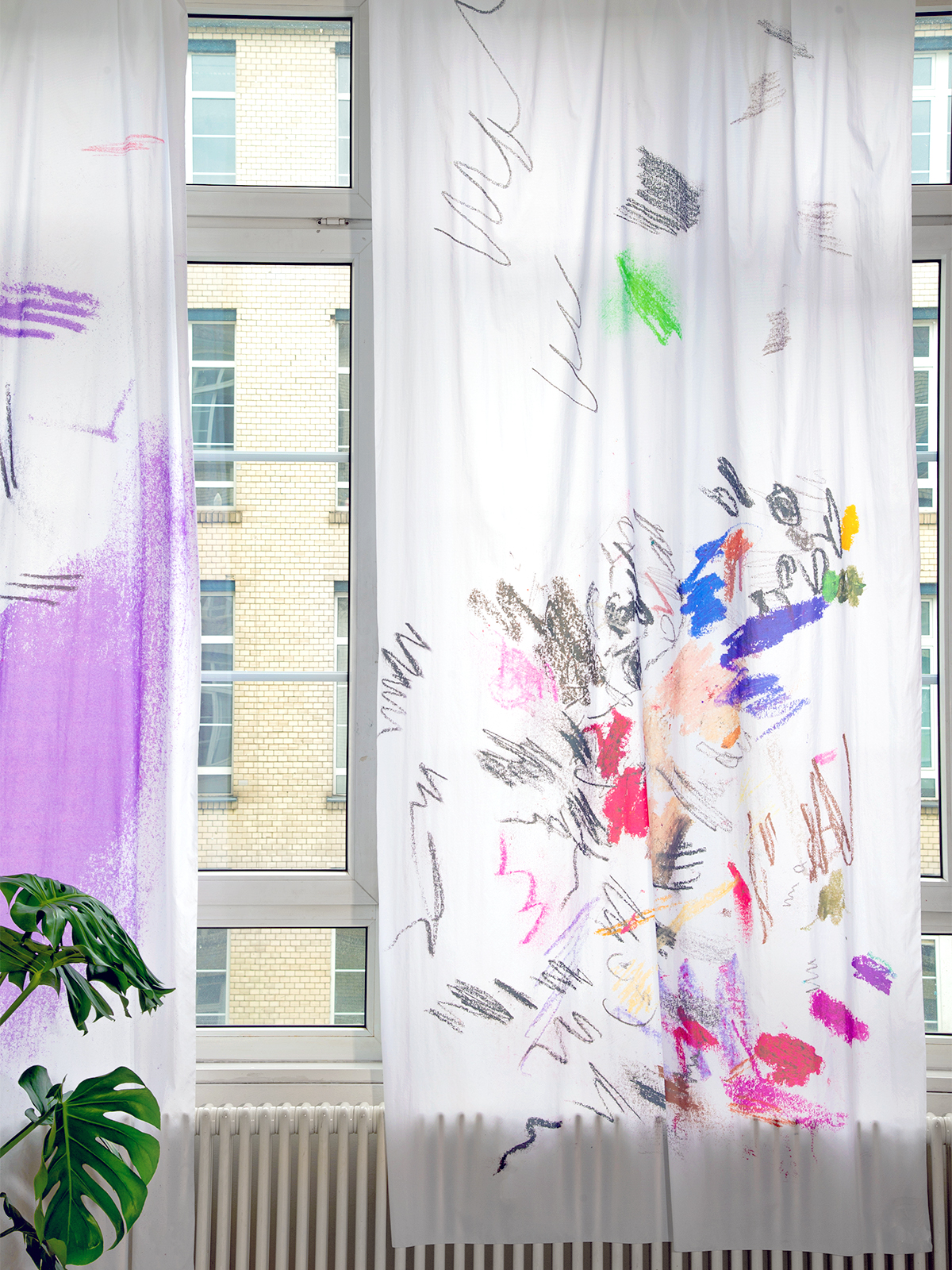 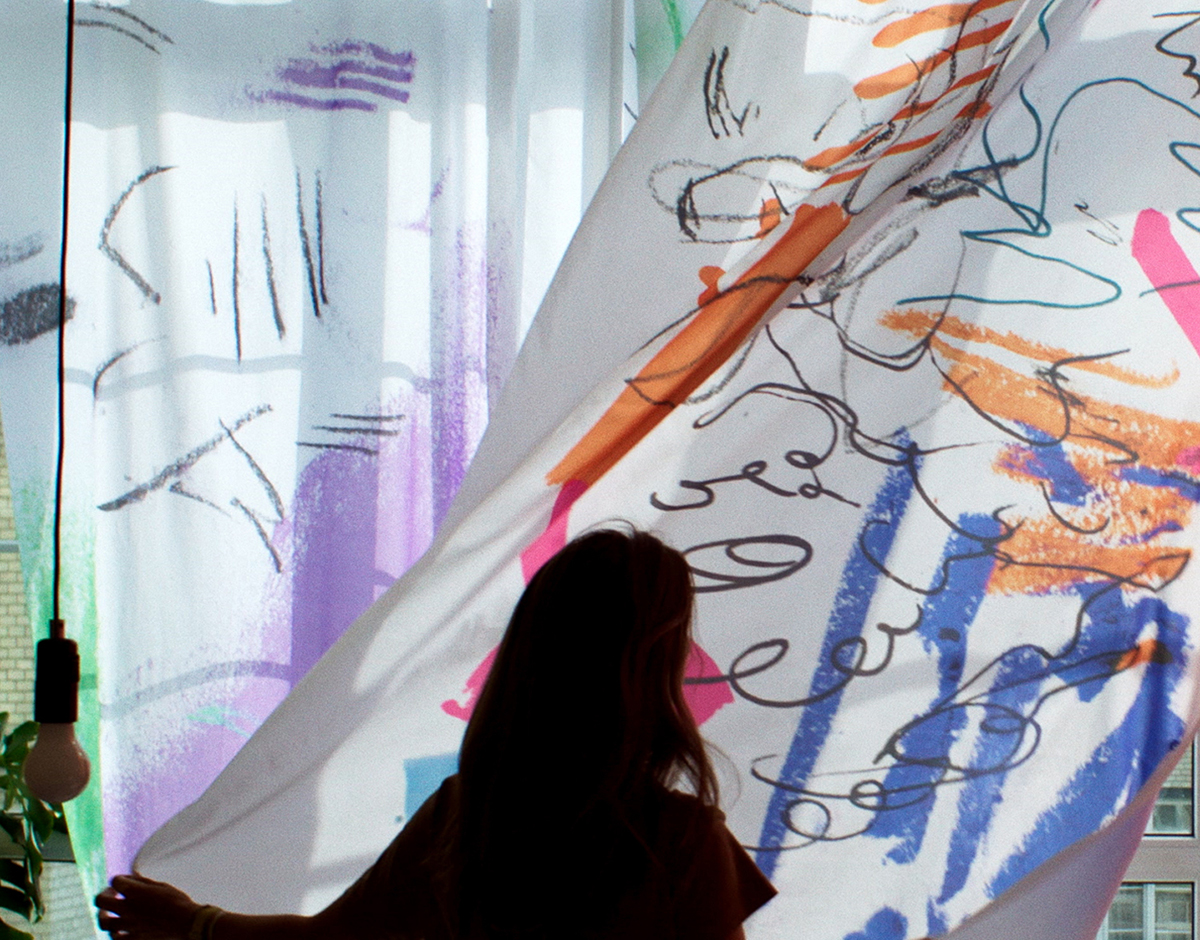 How would you describe the way the final panels work in a space?

After hanging the test prints in my home, in between rooms and spaces, I thought it was nice how easy and light they were. The Blow fabric is very fine and light, almost like airmail paper, in a way. I liked that you could put them anywhere, and they’re quite uncomplicated. You can just hang them over a stick in the window — they don’t need a lot of work in order to be placed in your space. It was quite surprising that once they were hung, the light coming through them was so beautiful that they started to shine, almost like glass, due to the transparency. The panels work so nicely in a room — they’re free and wild. It looks so good in the way it totally messes things up. It plays with all the straight lines in a room. In my studio, all the shelves and tables and lines that go up and down, it totally knocks them apart; it’s like an explosion.

At the start of this project I looked at all these existing interior textiles, and saw that you always have to do this repetition thing, with a pattern and repeat. That’s the tricky part in this whole business, so I tried to find a way around it. In the end we left a bit of a white border around the prints, so you could hang them more like paintings rather than a uniform pattern, which is nice. It’s breaking this system of symmetry in home textiles.

How would you describe the connection between Unscripted at the rest of your practice?

I think the spontaneity and the lightness pull throughout my work — when things look like they’ve been thrown out there. It’s something that becomes harder in life, to keep this airy lightness; as transgressive designers, our luggage gets heavier, we make more mistakes and are more conscious of the things we’re throwing out there. Social media has contributed to making us feel quite conscious about our work, and what to show and not to show. I think it’s nice to copy that into our space, and make it feel like it’s nonchalant and anti-design and not so planned.

I also often work with everyday objects, something ephemeral that people can relate to in their own lives. A lot of people came up to me and said ‘I love this! I always play around with pens and pencils in shops.’ It’s an act that draws you in — it’s free, and you can doddle around and waste time and not even buy anything. It’s a bit like on Facebook, the wall where you leave your messages, but an analog version. People write little messages on the test papers hoping someone will read it. This relating your own moment or experience with something is present in all of my projects.

Do you usually work spontaneously? Do you go out and buy a cabbage and then at home think, what can I do right now with this cabbage?

The initial moment is spontaneous, and sometimes I go back and refine it two or three times, and try to keep the initial spontaneity in it while I technically perfect it. Usually it’s going out and getting certain materials, and thinking oh this watermelon, let me slice it up and take the seeds out and turn them into rain. Here in my garden in Italy, I’ll forage leaves and make a bucket hat out of them. Or I’m at a party and making a seahorse out of the golden wrapper from a champagne bottle. I’m always trying to find a parallel between the real world and an imaginary world. Like oh, that looks like the tail of seahorse, and then I pull it and glue it and that’s what it becomes.

My favorite work is spontaneous, but of course the bigger projects go through a lot of thinking and process and mood boards and design stages. I think it would be nice to keep that spontaneous spirit in my work, and to be even more free than I am now. But at the same time it’s important to always have these ideas and these projects in stock, so I can make some wild shit and then if someone comes along and needs something, I can pull out my sketch book. It’s challenging to repeat the magic again, but in the end it usually works. 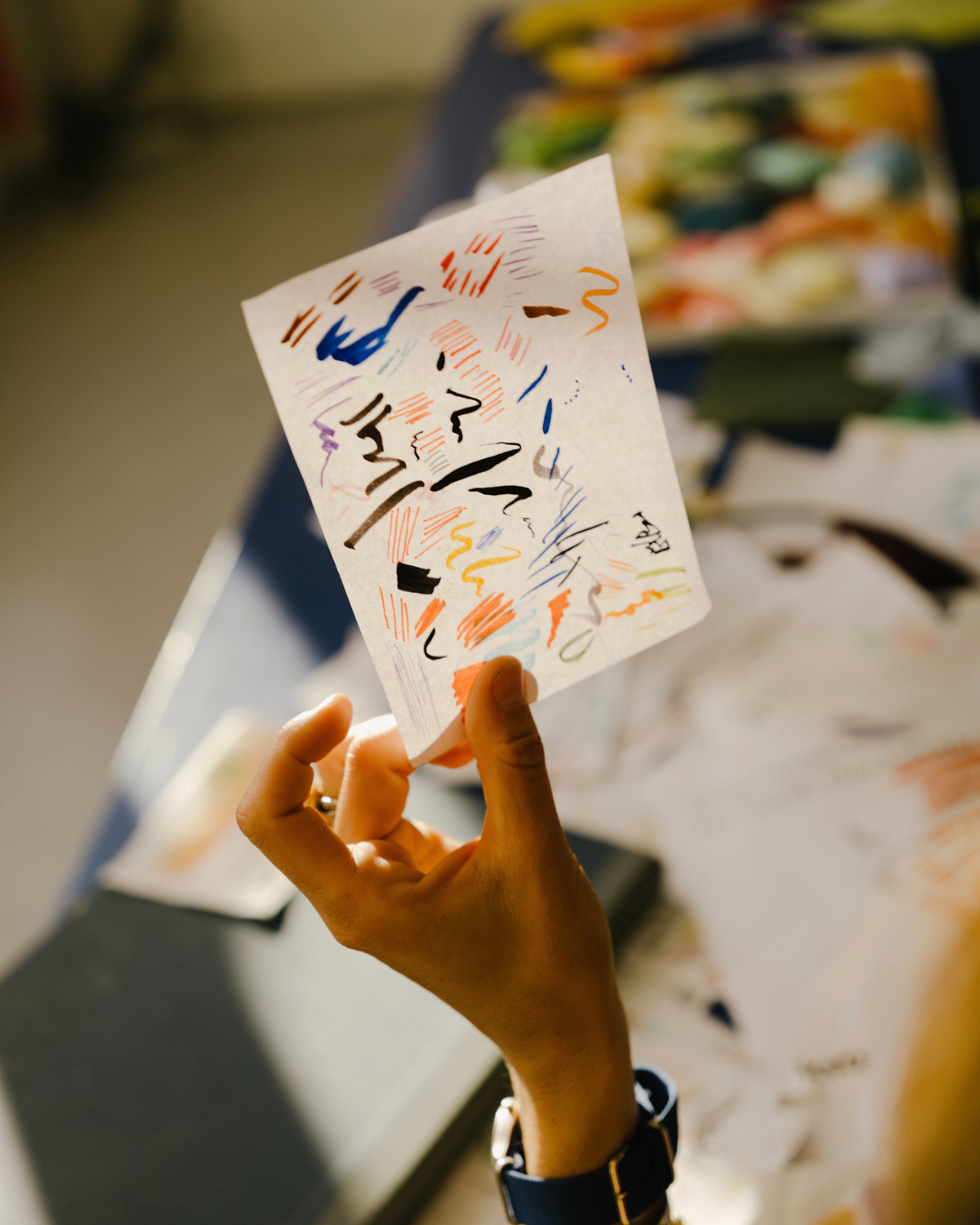 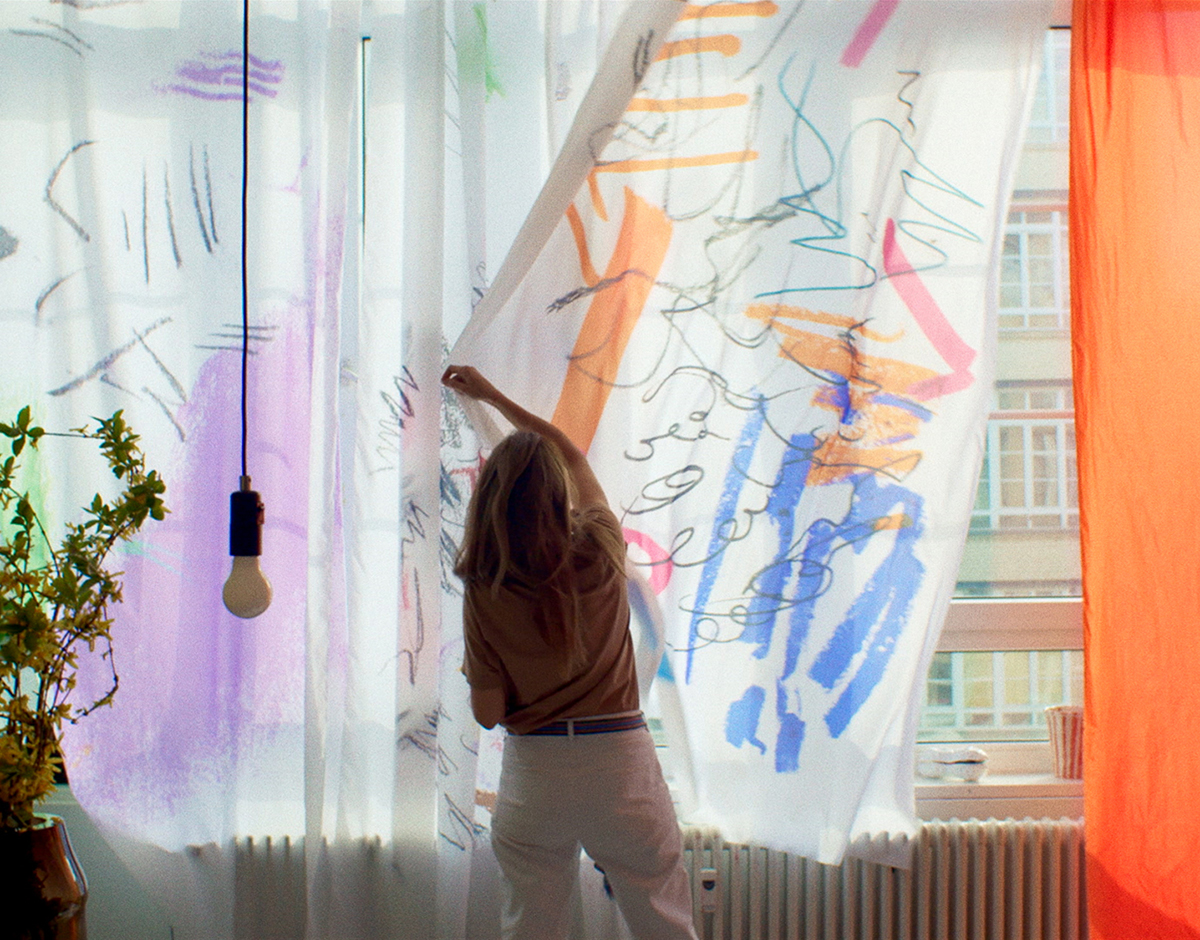 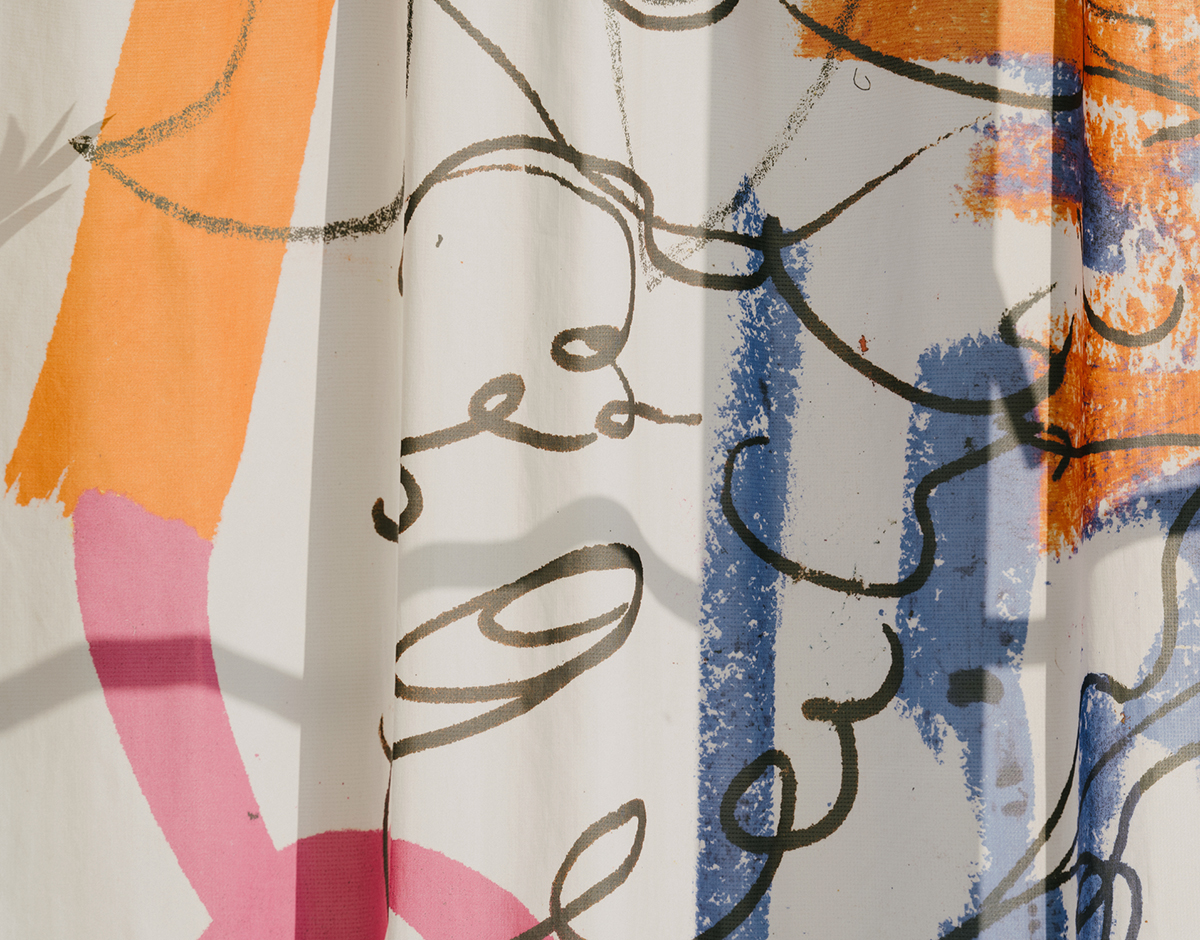 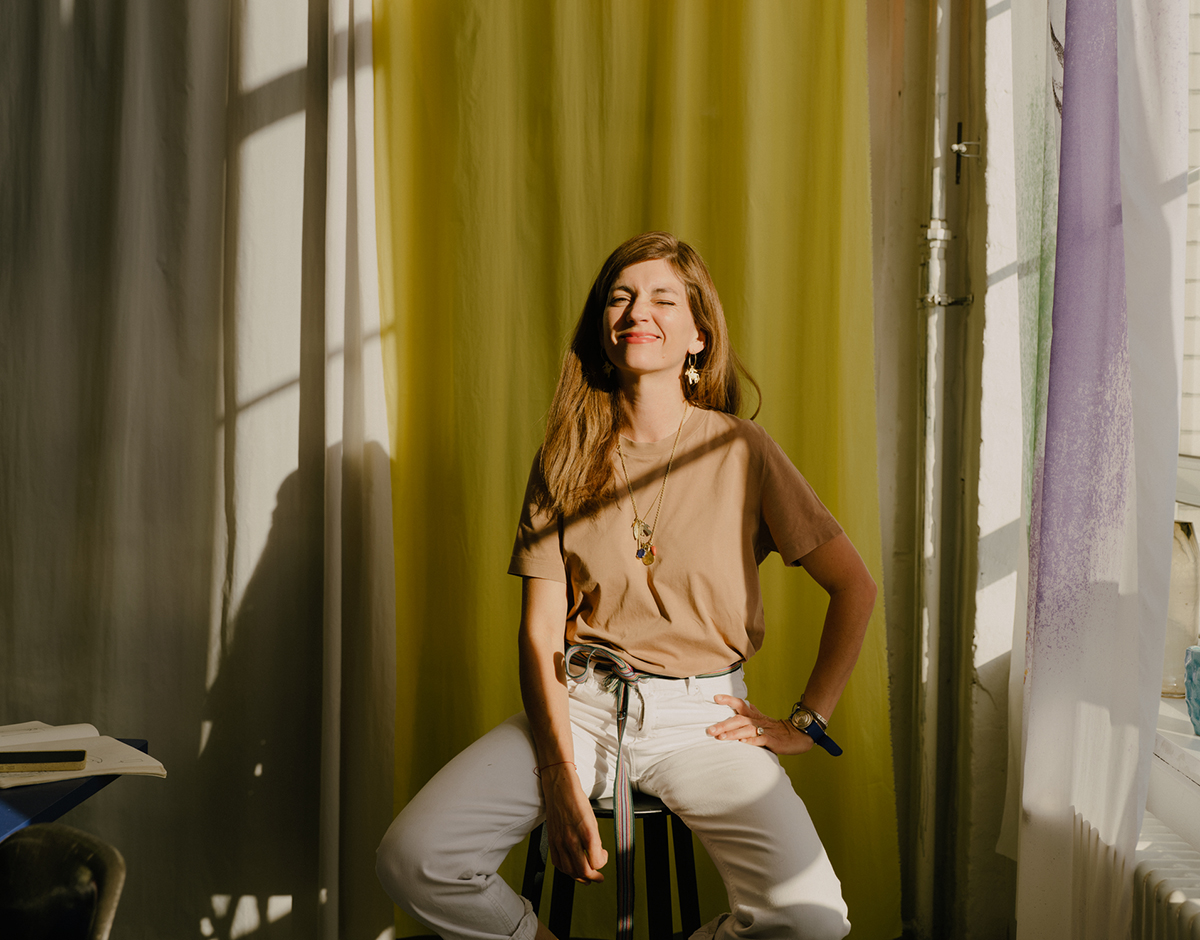 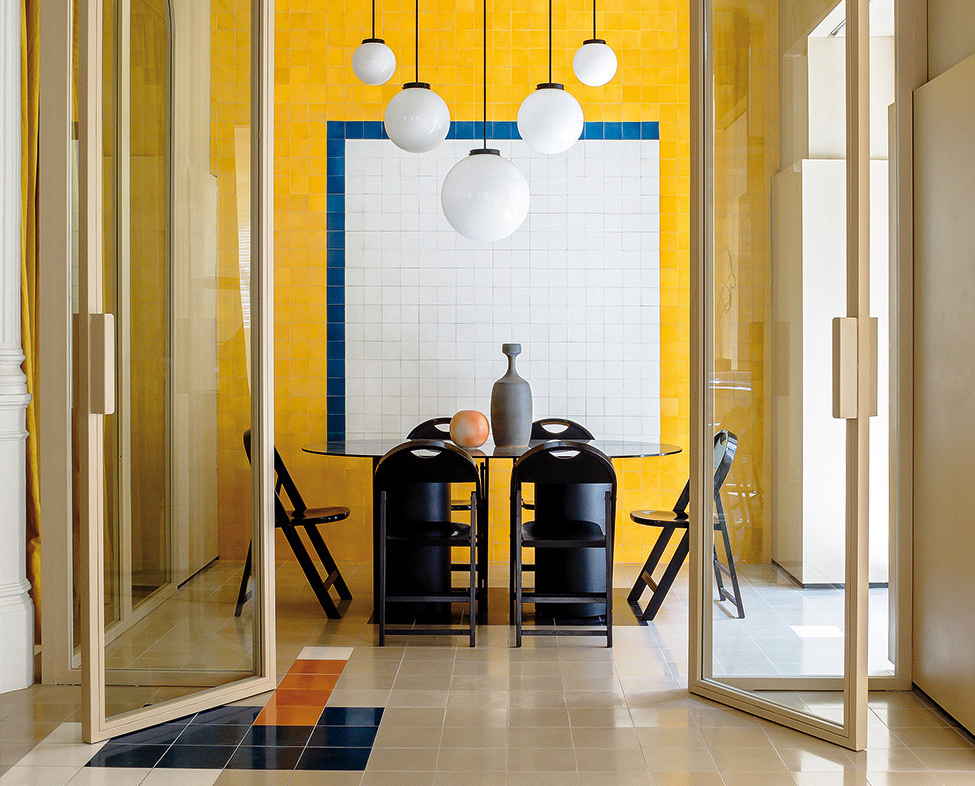 We only ever focus on office spaces when they are exceptionally cool, but these days it seems like more and more fit the bill. Our most recent office interiors obsession is Mr. Hyde, an ad agency based in Madrid, whose cozy factor rivals work-from-home facsimiles like The Wing.
More 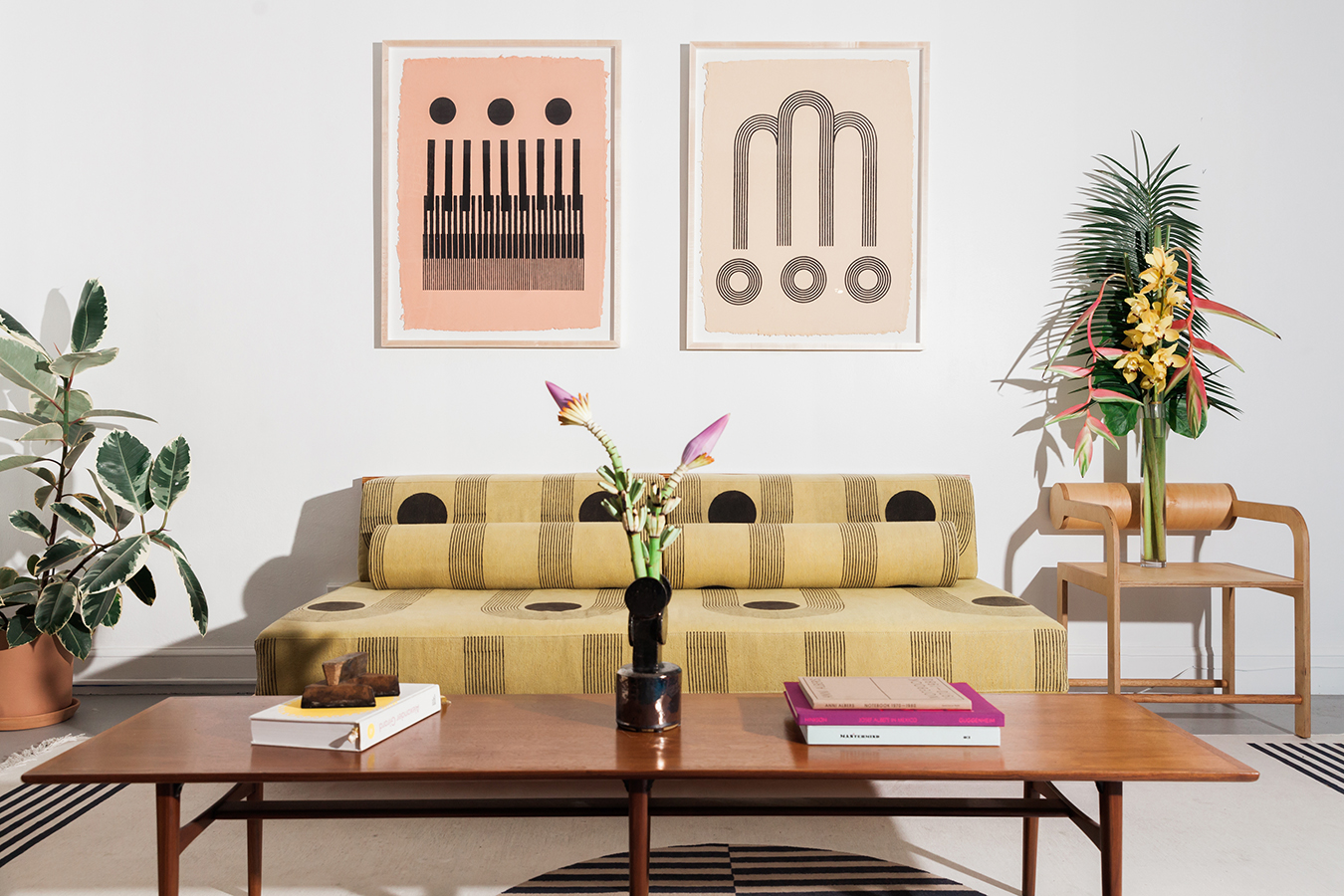 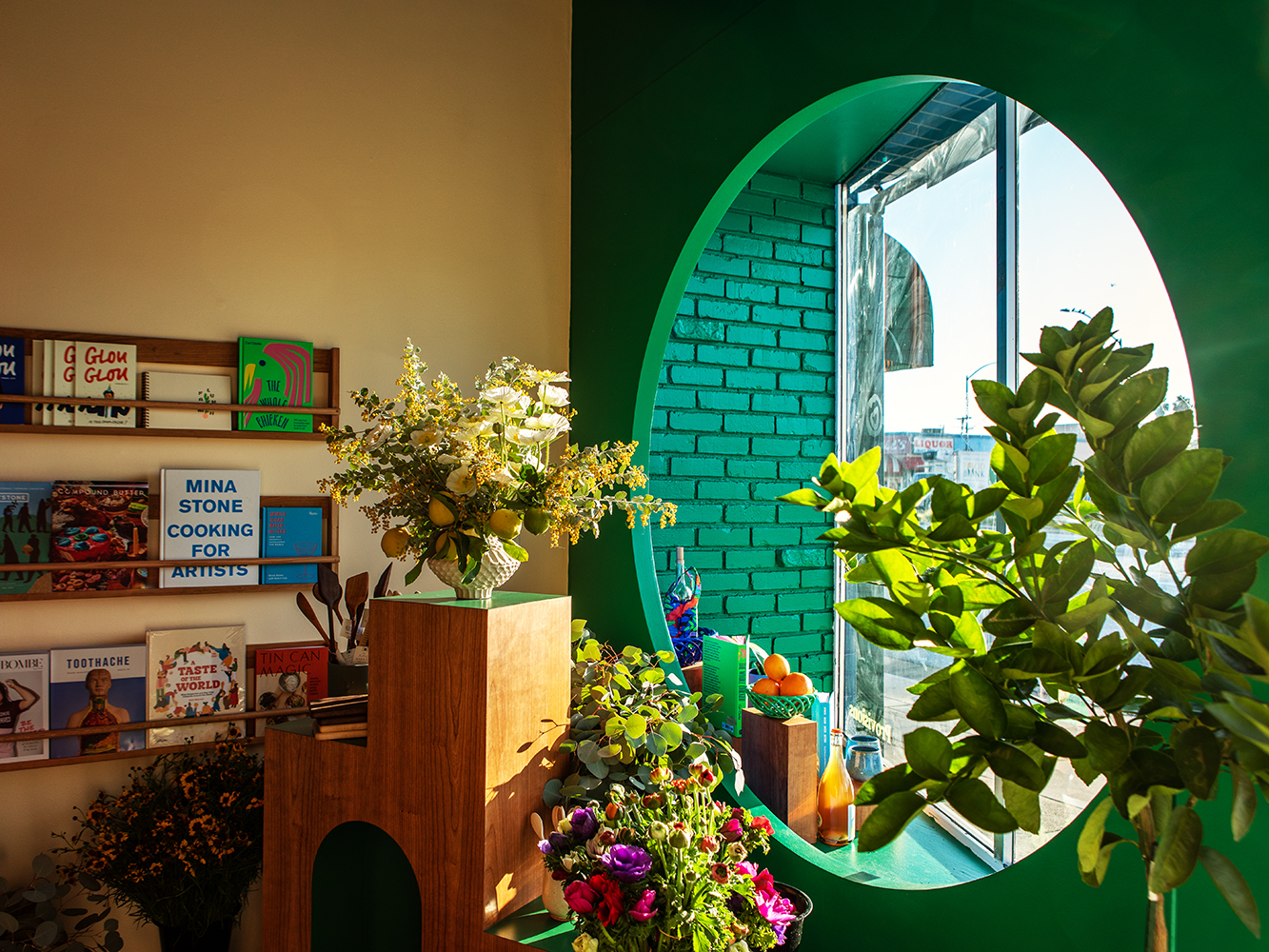 Earlier last month, a bright, cozy, and colorful new shop opened in Los Angeles's Atwater Village neighborhood. Called Wine & Eggs, the store — which sells natural wine and provisions, and in many ways reminds us of the LA version of Dimes Market — is the brainchild of Monica Navarro, owner of the beloved LA boutique Individual Medley (as well as a gem-focused wine store in the desert). For the interior, Navarro hired designer Adi Goodrich, in her first interiors project in Los Angeles.
More